In Florida and the Carolinas, Progress Energy’s network ties
various groups together to get deals done. 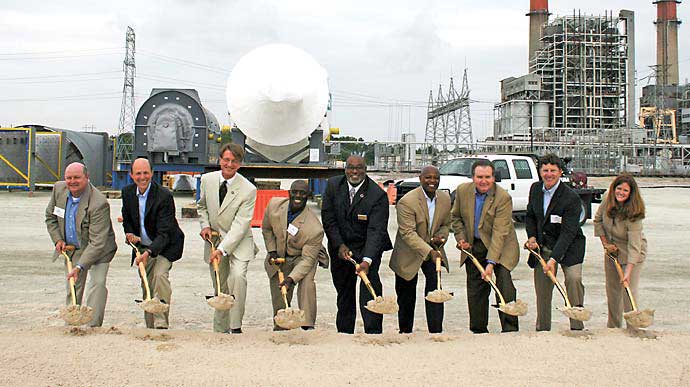 In the above photo, Progress Energy executives, local and state leaders and elected officials take part in the groundbreaking of the $600-million conversion of the L.V. Sutton plant in Wilmington, N.C. 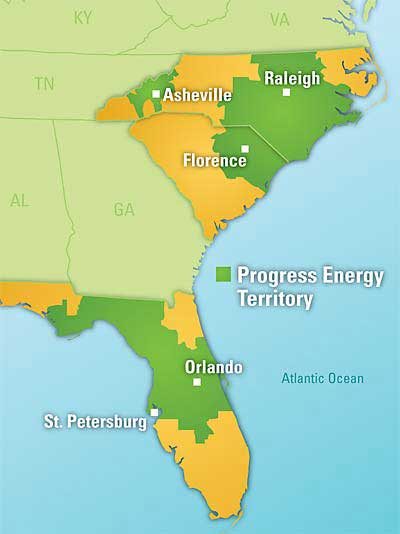 lugging in to the power of partnerships fuels the engine of economic development in the Carolinas and Florida, according to industry and government leaders who have seen that collaboration pay off in the form of corporate expansion projects.

"Economic development is a team effort," says Bill Johnson, chairman, president and CEO of Progress Energy. "Our external relations team is focused on collaborating with business and economic development partners at the local, state and regional levels. These partnerships fuel our success."

A case in point is Johnson Controls Inc., which broke ground in January on a new $150-million battery recycling plant in Florence, S.C.

"The folks at Progress Energy have been very good to work with," Lafond says of the project that will bring 250 jobs to a 36-acre (15-hectare) complex that is slated to be operational in 2012. "They understood our project and its importance. They were especially helpful with the installation of backup power and the negotiations around our rates."

Progress Energy is installing a large capacity standby service for JCI’s critical environmental load and will provide electric cost savings through its economic development rider. "The rider gives us a reduced rate on power for five years," says Lafond.

A pivotal factor was Progress Energy’s willingness to let JCI decide when to start the discounted service, according to Lafond. "You don’t just turn the place on and have it operating at 100-percent capacity," he says. "It can take six months or longer. That is a huge positive incentive for our company. It allows us to maximize our savings. That tells us that they understand our business."

The project is significant not just for South Carolina, but also for the nation. "We will be recycling automotive batteries at that site," Lafond says. "This is the first such facility permitted in the U.S. in over 20 years."

Lafond says JCI considered other locations for the plant, including Delaware, Florida and Mississippi. "We already had a pretty large car battery distribution facility in Florence," he says. "We had a great success story with the local work force."

Given the environmental concerns surrounding the project, notes Lafond, "the robustness of the electrical service is a must. We are basically running a lead smelter operation. With Progress Energy, we were able to look at the reliability of their service and found that there were no major outages over the last five years despite hurricanes and other severe storms."

Other key partners in the project were the Florence County Economic Development Partnership and the North Eastern Strategic Alliance.

These entities are not alone in working with Progress Energy to facilitate corporate expansions. In Roxboro, N.C., Progress Energy worked closely with the Person County Economic Development Commission to land a $160-million wallboard manufacturing plant from CertainTeed Gypsum.

The project creates 89 jobs that will pay an average annual salary of $55,247, nearly twice the average worker’s wage in Person County.

"Progress Energy has been our greatest partner," says Jim Stovall, chairman of the Person County EDC. "They helped us when we established our first industrial park here. The CertainTeed project never would have succeeded without Progress working very hard to make it happen."

Stovall notes that "everybody at every step of the way was willing to work with the project. The North Carolina Department of Transportation spent almost $10 million on road work. The gas line to the site is over 11 miles long and went through a number of challenges."

Barbara Currier, executive director of the Person County EDC, says that the area’s "very strong work ethic" played a crucial role in sealing the deal. "CertainTeed was one of the top ten projects in the state in investment in 2010, and it may end up being more like $180 million once everything is done."

In 2010, Progress Energy’s collaborative efforts with economic developers and other partners resulted in the creation of more than $675 million in industrial development and the generation of 2,366 jobs in Florida and the Carolinas.

Headquartered in Raleigh, Progress Energy is a Fortune 500 company with about 22,000 megawatts of generation capacity and approximately $10 billion in annual revenues. The company includes two major electric utilities that serve about 3.1 million customers in the Carolinas and Florida.

Progress Energy has received the Edison Electric Institute’s Edison Award, the industry’s highest honor, in recognition of its operational excellence, and was the first utility to earn the prestigious J.D. Power and Associates Founder’s Award for customer service.

The company celebrated a century of service in 2008 and is embarking on a plant modernization program to carry it well into its second century.

Progress Energy is partnering with Piedmont Natural Gas Co., local government and economic developers in a $600-million conversion of the company’s L.V. Sutton plant in Wilmington, N.C. The company and its partners broke ground in May on this project, which replaces coal-fired generators with natural gas and solar-based production.

When completed in 2012, the facility’s capacity will increase from 600 to 620 megawatts while also cutting carbon dioxide emissions in half, lowering nitrogen oxides emissions by more than 95 percent and virtually eliminating sulfur dioxide and mercury emissions.

The extension of new natural gas capacity in the region will also open new economic, commercial and residential development opportunities in the community.

A similar partnership is under way in Wayne County, N.C., where Progress Energy is building a new $900-million unit at the H.F. Lee Energy Complex near Goldsboro, enabling the retirement of three coal-fired units there.

Partnering in Florida and RTP

In Florida, the power of Progress Energy’s partnering is evident with the recent success in Gainesville/Alachua County of Bren-Tronics, a manufacturer of lithium-ion cells, which supplies 70 percent of the rechargeable batteries used by the U.S. military. The company, which seriously considered Asia, was a real win for the county as it revives a vacant lithium-ion battery manufacturing center. Brent Christensen, president and CEO of the Gainesville Area Chamber of Commerce says, "Progress Energy was critical in helping attract the company to Alachua County from our initial recruitment meetings in 2009 to the Bren-Tronics expansion in 2011. Our partnership with Progress continues to be essential as we grow quality energy storage manufacturing jobs here in Florida and the U.S."

As a regional partner, Progress Energy was instrumental in developing the Tampa Bay Regional Business Plan. The company’s Florida President & CEO, Vinny Dolan, chaired this strategic initiative. "Progress Energy has always had strong involvement in economic development. It is reflected in their work to help us build a regional business plan for the eight counties we serve, and it is a very powerful tool," says Stuart Rogel, president & CEO of the Tampa Bay Partnership.

"We now have about 60 Smart Grid firms in our region," Nance says. "We are second only to San Francisco. The people here are all working toward the same goal — branding the region as a Smart Grid region. That is possible only through collaboration and partnerships. We are coming together as a business ecosystem."

As a national partner, Progress Energy’s EnergyWise® smart grid initiative is investing in plug-in electric vehicle (PEV) technology, including a charging station pilot program under way in the Carolinas and Florida. The company has one of the most advanced utility PEV programs in the nation.

This investment profile was prepared under the auspices of Progress Energy. For more information, go to www.progress-energy.com/economic. 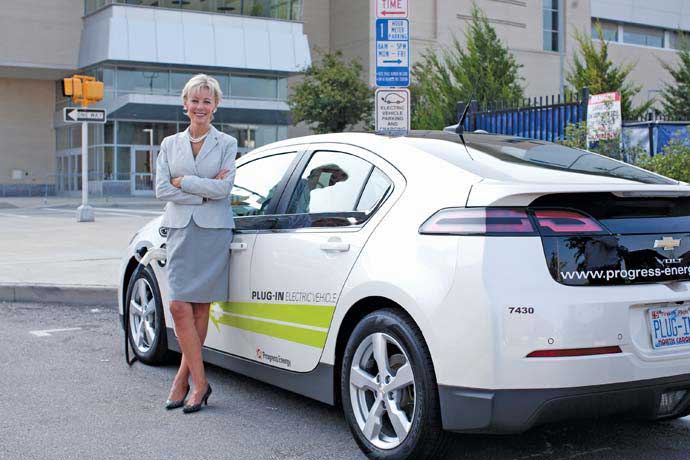 Progress Energy is partnering with General Motors in a federal grant program to demonstrate 12 Chevrolet Volts. Katherine Thomas, director of community relations and economic development for Progress Energy in North Carolina, stands next to a Volt.