Report: ‘Era of Less’ Widens the Gap
Between Project Priorities and Funds

rnst & Young and the Urban Land Institute (ULI) used "A Strategic Priority" as the cover line on their Infrastructure 2011 report, released in mid-May. The phrase sums up the challenge faced by many U.S. urban areas trying to provide adequate transportation and other infrastructure services for their residents, workers and businesses. Limited financial resources on the national, state and local levels are forcing many areas to reassess, reprioritize and rethink the financing of projects ranging from a sorely needed new subway line for New York City's East Side (US$17 billion) to rail infrastructure in Salt Lake City to expressways in the Dallas-Ft. Worth Metroplex, among dozens of other examples in the United States and abroad.

"We have entered an era of less, and we find that in the U.S. and in many parts of the world we are seeing downscaled ambitions," noted Maureen McAvey, ULI executive vice president, during a May 16 Webinar. "We have a slow economy, sluggish job growth and a desire to cut deficits, which is leading to this scaling back of our top ambitions around infrastructure issues.

"We still have an enormous unfunded infrastructure deficit," she added, citing an American Society of Civil Engineers estimate of over $2 trillion needed in the next five years to meet current and easily projected infrastructure requirements. "Best estimates are that we are spending and are projected to spend only half this amount. While we recognize the problem, the solution is certainly not yet obvious."

Stimulus spending on infrastructure in the past two years has helped, said McAvey, "but that will largely dry up by 2013. We will then be relying on old sources of funding and perhaps new legislation, where the prospects are not as optimistic as we would like." Federal programs in the works to revise and reform transportation initiatives in the U.S. are stuck in neutral in the present economic climate, she related.

"Voters recognize infrastructure as one of the top five to 10 national issues — encouraging access, mobility and movement of goods around the country. There is some consensus on the problem but not on how we would raise money, how it should be spent or who should be in control in terms of the feds, the states or the cities."

"For those who have read our infrastructure reports over recent years, one consistent finding is that the U.S. seriously lags behind the rest of the world in addressing its infrastructure issues," said Howard Roth, Ernst & Young's Global Real Estate Leader. "The U.S. is facing increasing federal, state and municipal budget deficits, and lacks any type of comprehensive national policy or the political will to develop a long-term approach to funding the significant maintenance needs of aging U.S. infrastructure, much less the modernization and greenfield development of critically needed new projects. We need to refocus our priorities: streamline the procurement process, attract private capital more efficiently, strategically invest in projects with national merit, and regain our stature as a global competitor. We need to take a page out of the playbooks of several nations around the world highlighted in our report, or we face the risk of serious deterioration of our country's economic and social well-being."

Among the countries in which infrastructure is a top priority, according to the report, are these:

"Whether in countries with mature economies or in emerging markets, government and business leaders have found a way to develop and execute on well-established national infrastructure policies and programs," observed Webinar co-presenter Malcolm Bairstow, Ernst & Young's Global Leader of Infrastructure and Construction. "Many of these countries' long-term view of the future economic importance of sound infrastructure planning has allowed them to be both strategic and more efficient in developing and directing funding for major projects."

Among the U.S. metro highlights are these: 1) More established cities, such as Boston, Philadelphia, Chicago and San Francisco, are forced to retrench on new projects and make triage decisions on repairs that include service cuts and fare increases. 2) Dried-up sales tax revenue cuts into the resources targeted for light-rail corridor-extension projects in several cities, including Charlotte and Denver. 3) Cities such as Atlanta, Phoenix and Dallas that don't provide gas-tax revenues or general fund support for mass transit are scrambling for funding sources.

The most promising solution to the nation's infrastructure shortfalls is to expand public-private partnerships (PPPs), the report suggests, pointing to the experiences of Virginia, Florida and Texas with managed toll roads. "Interest in gaining access to private capital and expertise through PPPs should accelerate as public funding sources diminish," the report predicts. 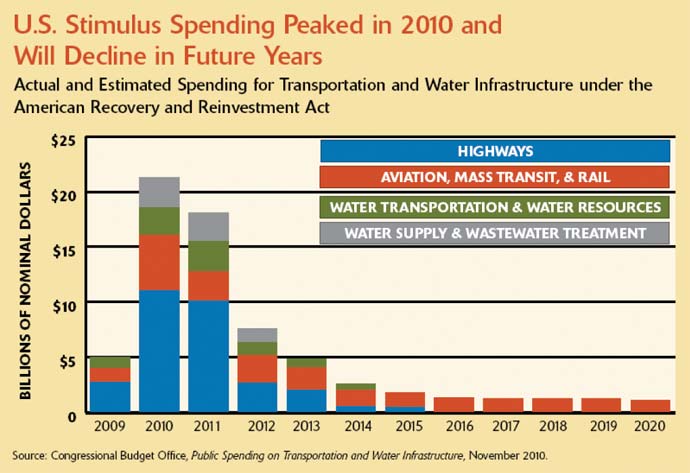 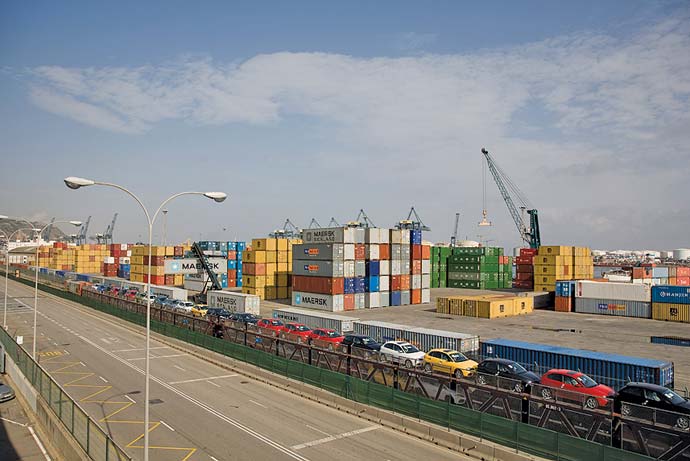 Photo by Oscar Ferrer courtesy of the Port of Barcelona
S

pain is among the nations pointed to by the E&Y/ULI report as an infrastructure model for its continued build-out of both high-speed and freight rail networks. The Port of Barcelona (pictured) is a case in point.

"The strategy of the Port of Barcelona is based in having a very strong position in our hinterland," says port spokesperson Laura Domingo Pardo by email. So the port has set up goods terminals in Zaragoza and in Toulouse, and has partnered in other logistics platforms at Puerto Seco de Azuqueca de Henares (Madrid) and the goods terminal of Sant Charles (Perpignan, France).

In May the Port of Barcelona and the private company Gran Europa set up Terminal Marítima Centro (TMC), whose goal is to build and manage a new €45-million goods terminal in Yunquera de Henares that will operate in collaboration with Puerto Seco de Azuqueca de Henares.