Solar energy is powering a surge in export activity in Nevada. 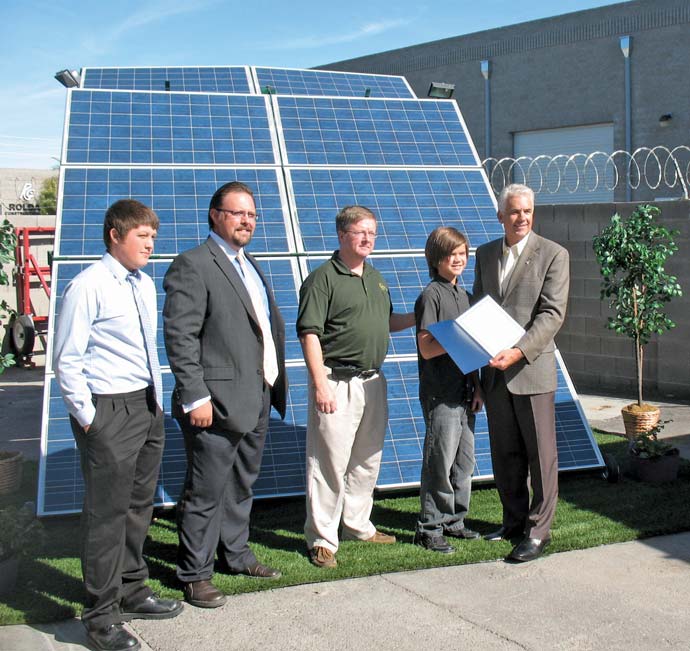 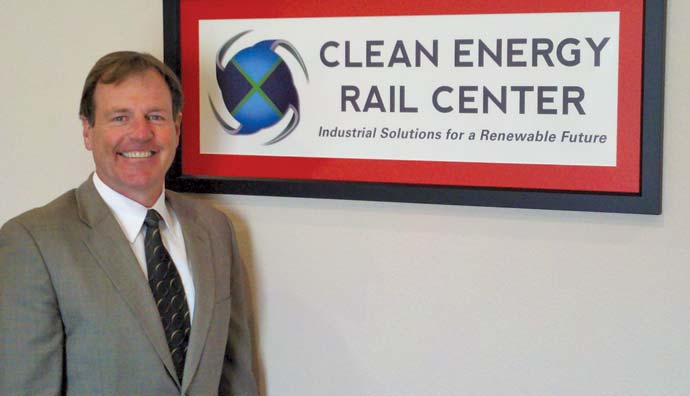 ith exports and alternative energy production rising in Nevada, the economic prospects of the Silver State glow with the golden hue of sunnier times.

No one understands this better than Ian Dixon, CEO of the Saving Energy Solar Group in Henderson, a thriving suburb south of Las Vegas.

"When the economy is down, entrepreneurs thrive," says Dixon, whose company grew from one location to four in Nevada and Arizona since 2007. "I see a big opportunity here in alternative energy. Most solar companies just do the solar panel installing. We do the R&D and the manufacturing as well. We look at the whole building envelope. This enables us to do both energy management and installation."

Occupying 20,000 sq. ft. (1,858 sq. m.) of industrial space in Henderson, SES is on the verge of going public, says Dixon. "Once we go public, the markets will open up with investment capital. Our goal is rooftop installation across Nevada and Arizona, and then eventually nationwide. The target goal of our firm is the installation of 20 million solar rooftops around the country."

Building products at home is the way to go, adds Dixon. "You must invest in your own local economy first," he says. "We have to create jobs if we want to turn our economy around, and manufacturing is the key. If you can't make something and sell it, you have no GDP. America has to get back in the business of making something."

Nevada is now the nation's fastest-growing export state and the fastest in growing export value as a percentage of its total state economy, the report from the U.S. Chamber states.

Nevada also ranks first in export adaptability, according to a new report from Ball State University's Center for Business and Economic Research. The state's overall index score of 8.20 gives it a solid lead over West Virginia, Delaware, Utah and Indiana — the other states in the top five.

"We have totally rebuilt our global trade office," says Mike Skaggs, executive director of the Nevada Commission on Economic Development. "We wanted to beef up what we were doing in China. From 2000 to 2010, we went from $13 million to $455 million in trade activity with mainland China."

China is now the No. 3 export market for Nevada, trailing only Switzerland and Canada but ranking ahead of Mexico and Japan.

"We have worked very hard to develop South America, a growing market for us," says Skaggs. "We are hitting a lot of pay dirt there. We have a lot of direct flights to Latin America because of Las Vegas. That is serving to boost our trade."

Skaggs adds that retailers are increasingly choosing Northern Nevada for logistics facilities. "There has been a lot of domestic activity in staging Nevada for distribution and fulfillment to the Western U.S. and international destinations," he notes. "Toys R Us just announced a fulfillment center in Reno, hiring 300 people. GSI Commerce, owned by eBay, did the same thing in Northern Nevada. These are full-service logistics and fulfillment centers. Urban Outfitters also announced a Reno location, and we are showing a Chinese freight forwarder sites for importing Chinese goods into the U.S. and exporting goods out of the same space."

Renewable power is making headlines in Nevada too, says Skaggs. "We are a national leader in per-capita geothermal and solar energy generation," he says. "We have a lot of good sunshine available and a lot of geothermal sites in the northern part of our state. Solar is still a little bit high in price for the market, but geothermal has a good price point now."

Amonix, a solar photovoltaic manufacturer, recently signed a lease for 214,000 sq. ft. (19,880 sq. m.) of new factory space in North Las Vegas. The company intended to hire 278 employees but is already up to more than 400 workers on site, says Skaggs. "They are making high-efficiency solar panels, and they do not use water. This new technology is being accepted readily in the marketplace," he adds.

Dixon of SES says that now is a good time for alternative energy companies to expand in Nevada. "I came to this town 10 years ago from England, and we have better facilities here in Henderson," he says. "The local and state governments in Nevada have been pretty good to us, but our intention is to not be just a Nevada-based company. We plan to be global."

High-tech companies like what they see in Nevada too, says Somer Hollingsworth, president and CEO of the Nevada Development Authority. "We are seeing an uptick in business, and a lot of it is coming from California," he says. "California is taxing sales made on the Internet and Nevada is not, so we are getting some action out of that. We have seen four very large companies that sell products on the Internet move to Nevada."

Recent high-tech expansions in Nevada have come from LINQ 360 and Zappos.com. LINQ 360, which provides technical support to the hospitality industry, took up 8,500 sq. ft. (790 sq. m.) in Las Vegas, while Zappos.com is moving into the former Las Vegas City Hall building in the central business district.

An Internet order fulfillment center for shoe sales, Zappos.com will employ about 3,000 people at the new site in Vegas.

"Zappos will move downtown in about a year or less," says Hollingsworth. "They will rehab everything first. They will eventually build a new corporate center next to it." (Read the whole story of the Zappos.com project, first published in April, at SiteSelection.com.)

Resurgence in trade activity in Nevada means increasing demand for multimodal sites. Filling that gap are two planned projects, one in Northern Nevada and one near Vegas.

The Clean Energy Rail Center in Fernley about 40 miles (64 km.) east of Reno is a 1,060-acre (429-hectare) site being planned as a multimodal transportation facility. "A developer wanted to start doing rail projects on a 240-acre (97-hectare) site here four years ago, just when the economy started going down," says Robert Skinner, founder of RMS Development, which is managing member of the Clean Energy Rail Center. "I developed a relationship with Union Pacific Railroad and the City of Fernley. A neighboring property owner had even more land, and I realized this was a perfect intermodal transportation site because of its location, size and shape. Plus, it was a known geothermal site."

The parcel offers dual rail service, Foreign Trade Zone status and a new interchange at Interstate 80 and Highway 50. The site is a one-hour drive from the California border.

"We are targeting three types of users: companies that are large transportation users and need large rail capacity, such as mining companies; renewable energy companies; and very large greenhouses, due to the amount of sunlight and the presence of geothermal resources," says Skinner. "We expect to focus on energy creation."

The tract has 11,200 ft. (3,414 m.) of railroad siding and a 60-KV transmission line. "We expect to break ground next summer," notes Skinner. "We are doing final permitting for municipal water and sewer. We are planning power distribution now, including geothermal heating."

Skinner says the goal is to reduce truck traffic on I-80, lower transportation costs for shippers and diversify the Nevada economy. "Northern Nevada has traditionally been a great transportation hub," he adds. "We have all the foundational components we need."

On the south end of the state, the managing members of Apex 385 LLC are putting together a plan to develop the 365-acre (148-hectare) City View Business Park in North Las Vegas.

Mason Harvey, one of the managing members, says, "We are the only site that provides rail-supported access to the ports in Southern California directly. We could service up to 6 million sq. ft. (557,400 sq. m.) of buildings."

The site is approved for Union Pacific Railroad service and provides 5,200 ft. (1,585 m.) of rail siding. "We also recently received approval from the U.S. Department of Commerce for the entire site to be designated as a Foreign Trade Zone," says Harvey. "The site is approved for municipal water and sanitary sewer, with electrical power, natural gas and fiber-optic available as well."

With direct access to Interstate 15 and close proximity to Interstate 215, the tract is designed to expedite truck traffic along the Cana-Mex Highway, notes Harvey. "We can transfer containers directly from trucks to the rail line. We are talking to a joint venture developer right now, and we expect to be up and running within 18 months."

While the entire parcel is available for purchase for $71.5 million, Harvey says that "our preference is to work with a developer to develop it."

CVBP is close to the planned future home of the University of Nevada, Las Vegas. "They have 1,000 acres (405 hectares) set aside for their new campus. It is located only three minutes from our site," says Harvey. "You can live, work, learn and play within minutes of this location. Everything is here." 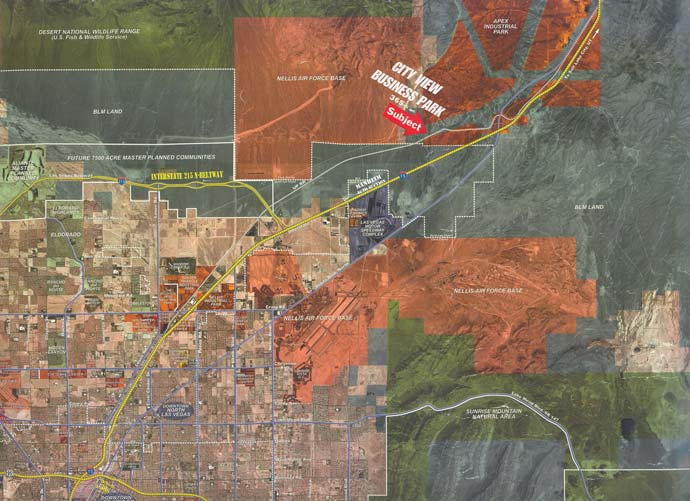 The 365-acre (148-hectare) City View Business Park in North Las Vegas provides rail-supported access to the ports in Southern California and has received approval from the U.S. Dept. of Commerce to be designated as a Foreign Trade Zone.
Image courtesy of Apex 385 LLC