ustomer contact firm C3 picks its spots and staffs them in record time.

The numbers are large and the expansion is rapid from Plantation, Fla.-based BPO firm Customer Contact Channels (C3), which this summer proceeded to add a cumulative 2,000 U.S. jobs with expansions at recently opened facilities in Twin Falls, Idaho, and Salt Lake City, Utah, and by locating two new customer contact centers in Tucson, Ariz., and Waco, Texas.

Only a year old, the company, led by former executives from Precision Response Corp., already operates 14 locations worldwide. Its sole Florida operation is its headquarters, though leaders told the Miami Herald in August that they plan to open a contact center in the state's Panhandle within the year. Other facilities operate in Ashland, Ohio; San Juan, Puerto Rico; Bogota, Colombia; San Jose, Costa Rica; Dalian, China; Mumbai, India; Sofia, Bulgaria; Glasgow, Scotland; and Manila, Philippines, where the company operates two centers and is adding another 1,000 seats of capacity.

According to the Business Process Association of the Philippines, as of December 2010, about 530,000 employees comprise the BPO labor force of over 800 IT-BPO companies in that country. IBM alone is hiring by the hundreds. But despite the vaunted work ethic, attitude, friendly voices and accent attributes of Filipinos, companies increasingly are finding good things to say about those same attributes in U.S. citizens.

The company is cagey about customer identification, though it has stated that the Tucson facility will support a Fortune 100 healthcare company.

"We're rapidly growing right now, and proud to be part of the economic recovery," said David Epstein, chairman and co-CEO of C3.

Honda Diversifies Base
With New Plant in Mexico

fter the March earthquake in Japan, Honda in late May pledged to recover North American production to 100 percent of its plan by August. Once it reached August, it improved on that plan. On August 12, Honda announced it would build subcompact cars for the North American marketplace at a new $800-million plant in Celaya, Guanajuato, Mexico, that will employ 3,200 people.

Expected to produce 200,000 units at full capacity, the 61-million-sq.-ft. (5.66-million-sq.-m.) plant will be located about 210 miles (338 km.) east of Honde de Mexico's two existing plants in El Salto, Jalisco, which build automobiles, motorcycles, auto parts and ATVs. The new facility, more than four times as large as the El Salto complex, will be Honda's eighth auto plant in North America (part of 14 plants overall) and will bring Honda's total investment in North American operations to $21 billion.

Nissan and Mazda also have recently expanded their Mexican production bases. And Automotive News reports that Hyundai is eyeing Mexico as part of its own plan to expand North American production. Honda also has added shifts or returned to full-shift capacity at its plants in Greensburg, Ind.; Marysville, Ohio; and Alliston, Ont. 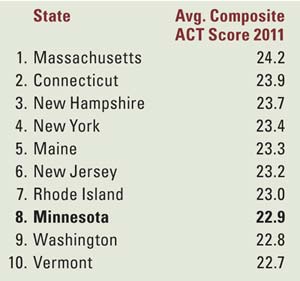 CT's yearly report, "The Condition of College & Career Readiness 2011," released August 17, found that 25 percent of graduates in the class of 2011 who took the ACT exam met or surpassed all four of the ACT College Readiness Benchmarks, suggesting they are ready to succeed academically in specific first-year college courses (English composition, college algebra, introductory social science and biology) without the need for remediation. This compares to 24 percent last year, marking the third consecutive year that overall college and career readiness has increased.

"In today's knowledge-based economy, American children are competing with the rest of the world for jobs, and our country's long-term economic security is directly tied to the quality of its public education," said U.S. Secretary of Education Arne Duncan. "These ACT results are another sign that states need to raise their academic standards and commit to education reforms that accelerate student achievement."

The top states in composite scores are listed here. However, all but one had less than 30 percent of graduates tested — Minnesota stood out with 72 percent. Among the eight states which tested 100 percent of their students, the highest average composite score was in Illinois, at 20.9. This year’s pool of ACT-tested graduates (1.62 million) was the largest and most racially diverse in the 52-year history of the exam. The proportion of African American and Hispanic/Latino test takers has grown from 19 percent in 2007 to a high of 26 percent in 2011. Test takers of Asian descent, who comprised 4 percent of the total, had the highest average composite scores of any racial group, at 23.6. ational occupational projections from 2008 to 2018, developed by the Bureau of Labor Statistics and backed by state projections from the labor market information sections of each state's employment security agency, call for the following states to show the highest percentage increases in positions across all occupational categories:

New demographic analysis of 2010 Census data by the Population Reference Bureau shows that, since the 2000 Census, "areas with the fastest growth included suburbs of metropolitan areas in the South and West, such as the region around Orlando, Fla.; the Research Triangle area of North Carolina; the northern Virginia exurbs of Washington, D.C.; and the areas surrounding such cities as Las Vegas, Atlanta, and several cities in Texas (Houston, Dallas-Fort Worth, San Antonio, and Austin)."

At the same time, noted the PRB, the decline of rural America appeared to continue over the past decade.

"In fact,," said the report, "nearly half of the 1,104 counties that lost people during the 2000s were counties that were isolated from metropolitan areas and had small or nonexistent urban populations."

The PRB report also noted that "as recently as 1940, New York State's population was larger than the combined populations of California and Texas."

ITT is doing its part to contribute to Utah's job-creation projection, announcing in June that it would bring more than 2,700 jobs to the state over the next 15 years, including 500 in the short term, as part of a $112-million expansion of its Salt Lake County composites engineering and manufacturing facility.

Currently ITT employs 400 Utahns who serve commercial and military aircraft customers. Project jobs include high technology composite manufacturing and assembly positions, as well as engineering and project/program leadership positions. New wages are estimated to be approximately $1.3 billion over the term of the project, which is supported by a $33.6-million EDTIF post-performance refundable tax credit incentive, approved by the Governor's Office of Economic Development Board, that will represent 30 percent of new state revenue collected over 15 years. ITT spokesman John Dench says the final paperwork is virtually complete, and the company will be moving in late this year or early next.

"The South and West both grew 14 percent during the 2000s, significantly faster than the national average and more than three times the growth rate of the Northeast and Midwest," said the PRB report on the Census. "Three in five Americans lived in the South and West in 2010. And for the first time, the West has overtaken the Midwest as the second-most-populous Census region — just as it overtook the Northeast 20 years earlier." nalysis released by the Associated General Contractors of America in early August reported that construction employment increased in 149 out of 337 metropolitan areas between June 2010 and June 2011, declined in 141 and stayed level in 47. Association officials noted that the local employment data posted slightly stronger gains largely because of growing private sector demand for construction. LCOR and Ivy Equities will rehab a 26-year-old building in Plainsboro, N.J., to be the new U.S. headquarters for Novo Nordisk.
D

enmark-based diabetes treatment company Novo Nordisk, Inc., and a joint venture led by Ivy Equities and real estate investor and developer LCOR in partnership with Intercontinental Real Estate Corp., on Aug. 1 announced a $215-million redevelopment project for a 770,000-sq.-ft. (71,533-sq.-m.) office building in the Princeton Forrestal Center in Plainsboro, N.J., that will serve as the company's new U.S. headquarters.

The company has signed a long-term lease for the entire building, with the initial phase of occupancy being approximately 65 percent of the space. The building will be able to accommodate approximately 1,500 employees. Novo Nordisk will be relocating from its existing headquarters in Princeton, and plans to occupy its new space in spring 2013. The company chose to redevelop in Plainsboro after considering a build-to-suit option elsewhere.