Belfast by a Nose 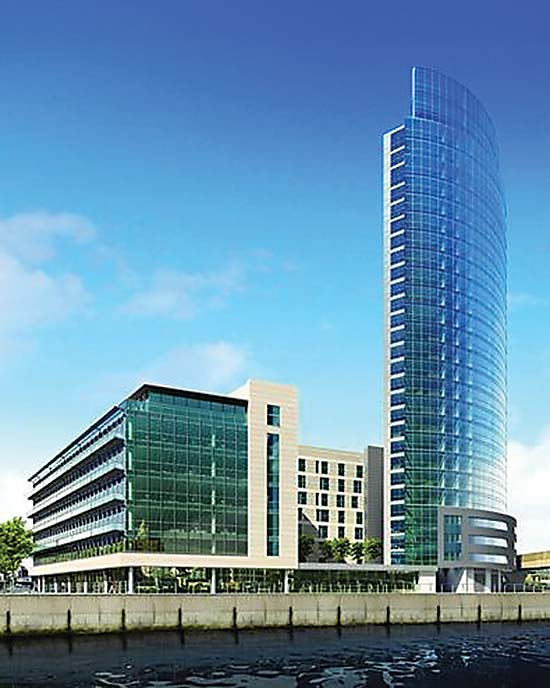 Allen & Overy’s new shared services and legal services center will be located in Belfast’s Obel Tower, Northern Ireland’s tallest building, developed by the Karl Group at Donegall Quay on the banks of the river Lagan. The tower’s groundbreaking was held in 2006, and construction was completed in 2010.

Given the world to choose from, a London-based global legal power chooses to travel just up the road.

llen & Overy is one of the world's most active law firms, with more than 5,000 employees in 26 countries, and in the midst of a global surge of office openings in such locations as Jakarta, Australia, Casablanca and Washington, D.C., and seven office relocations during its most recently reported fiscal year, during which it reported that 60 percent of its turnover came from activity outside the U.K.

So, where to locate a new shared services center? And what if the scope of those services changes while you're looking?

Under the guidance of Buck Consultants International, Allen & Overy began a seven-month tour around the world in March 2010, coming to a decision in November and formally announcing in February 2011 that Belfast's Obel Tower would be the site of its new IT, finance, business services, marketing HR and legal services center. Half of the project's 300 jobs will be relocated from London, but only a handful of folks will relocate themselves, with all the talent coming from plentiful local sources.

Andrew Brammer, service center head at Allen & Overy Belfast, aims to lead the hiring of approximately 180 people through 2012. Since beginning recruitment in April, the firm has received more than 2,500 applications. Our due diligence seems to have held together," he suggests.

The trip to Belfast was not without its detours. Ben Engel, senior consultant at Buck Consultants International, says the first phase involved getting a team together and focused on clear objectives and project drivers, then extending feelers around the world to locations relevant to those drivers. He says the firm set up a structured and detailed team, including the project sponsor, a managing partner, the project director (aka the CFO) and a steering group and project team.

"All relevant operational executives for functions that were going to be transferred were represented within those groups," he says, adding that BCI itself devoted several consultants to "Project Columbus," led by Josefien Glaudemans.

Near-shore and offshore locations were all in the mix. The list of 21 initial locations included the European "usual suspects" such as Poland, Hungary and the Slovak Republic; Asian locations such as Mumbai, Singapore and Kuala Lumpur; and outliers South Africa and Cairo. Asian site visits were carried out under the aegis of site consulting firm Tractus Asia.

The finalists to emerge from the globetrotting analysis were Bangalore and Chennai, India; Belfast; Budapest; Cairo; Manila and Warsaw. Which would emerge from that list depended on three factors, says Engel.

"Allen & Overy had clearly stated that the main goal was to keep very high quality standards, and then see what cost benefits could be achieved," he says, noting the fairly wide spread in both factors among the finalist locations. "We were looking for the best possible balance of the two. The third factor was risk. What are the risk factors you encounter in various places, including economic risk, political risk and natural disasters? These do play a role."

During the entire process, both men assert, the team made a conscious effort to, as Engel puts it, "move away from gut feelings," or one-time-visit perceptions of executives, and stay objective. That was part of the motivation for fielding bids from four firms to run the project.

"We wanted to go externally so that we had absolute objectivity," says Brammer. "In these types of discussions, a lot of people have an opinion of location X versus Y. We wanted to make sure it was selected on its merits, rather than an influential person saying we should go here or there."

Engel says Cairo and Belfast were surprises of a sort, and the rising of Belfast to the top of the list was unexpected.

"We all wanted to research the possibilities in Belfast, but no one in the beginning thought this was going to be the number one contender," he says, in part because of the large clusters of shared service centers in the other locations. "But Belfast had a good mixture of relatively low costs and relatively high quality of people and facilities to be offered," he says.

Each finalist location received a site visit running over several days, involving visits with human resources companies, headhunters and other shared service centers, where the site selection team members could get a feel for the quality of the native speakers.

"We got a huge amount out of going with Buck Consultants and taking a back seat, listening to them talking with the shared services centers and development agencies," says Brammer. "If we did it again, that's the bit we'd want to recreate to try and ensure success."

Brammer, a former IT specialist for the firm, is especially cognizant of the need for high-level technological backbone for such a project, something he says all seven finalists had.

"In order to do HR administration, accounts payable and accounts receivable, which are based in London, the need for high-speed, low-latency connections was absolutely critical in terms of choosing the location," he says, with special attention on how much inefficiency might be created by latent connections back to the U.K.

"In the final seven locations, the further away we went from London, the more concerned we were about latency, especially Manila," he says. At the same time, the team was impressed with what it found in Belfast, which has the highest degree of broadband connectivity in the U.K., including high-speed lines to both London and New York.

"From a network perspective, Belfast and Budapest were strong contenders," says Brammer. But sometimes the technical also crosses paths with the political. That was the case as Brammer looked back at the project team's Egyptian visit through the prism of this year's revolution there.

"We asked quite a lot of questions in Cairo about how the state manages the Internet connections there — as in actively looking at the data or being interested in the connections. We were assured they didn't look at the traffic. But you saw in the events at the beginning of this year that one of the first things that happened was that access to the Internet was restricted. Understanding how the telecom industry operates in a location was an important part of our due diligence process."

A recent comparative study performed for the Belfast City Council by Geoeconomics and the Centre for Applied Economic Geography at Birkbeck College, University of London, found that knowledge industries generated 25 percent of Belfast´s employment opportunities. "The majority of knowledge industry jobs were focused within the financial and business services sector, with an 8.8-percent increase in Belfast´s knowledge industry employment between 2001 and 2005 comparing favorably with the U.K. average of 4.6 percent," said the study.

Ultimately, however, it may have been knowledge of a particular kind that steered the new project from Allen & Overy to Belfast, as the scope expanded beyond the usual back-office functions.

"Halfway through, the firm made a decision it wanted to explore the opportunities that a legal services center could offer the business," says Brammer. "This is where elements of a transaction originating in London are executed outside of London, at the same quality but at a lower price point. We were looking for common-law-trained lawyers and paralegals. Obviously Belfast has that — it's part of the same legal system, and can recognize local nuances. Then the availability of top-quality English becomes paramount as well — there is a big difference between speaking natively for HR and accounts payable, and writing it for one of the world's top law firms.

"Once we understood that there was a talent pool at Queen's University Belfast and the University of Ulster … if there was a tipping point, that was probably one," says Brammer.

Thus a dark horse at the starting gate came streaking home first at the finish line.

"In location selection, do not ever take anything for granted in terms of trends or developments," says Engel. "Every specific case has its own specific requirements, and if you do the research well and objectively, you will find out there are still possible outcomes that may not move along with all the other decisions. You have to look carefully for where you find the best match."

Brammer says the best lesson from the exercise was the absolute involvement of all key stakeholders at every step, and the engagement of those stakeholders with the data vs. perceptions or preconceptions. 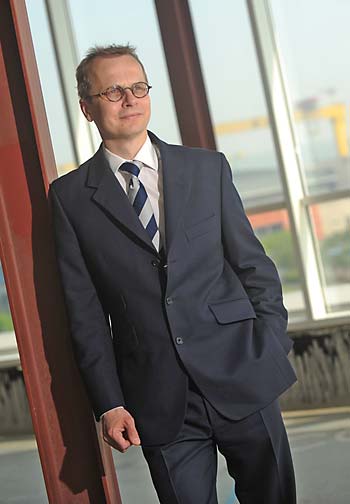 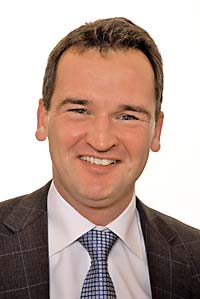 Around the World In 21 Sites

ere are the sites that were chosen for closer scrutiny during Allen & Overy's global site search for a shared services center:


Let There Be Food and Drink

The 538,000-sq.-ft. (50,000-sq.-m.) facility received an investment of £93 million (US$152 million) and provides employment for approximately 600 people. The investment was supported by Invest Northern Ireland. The plant includes an energy-efficient Combined Heat and Power plant and a new high-tech warehousing system. In October 2010 the site received a visit from Her Majesty The Queen. 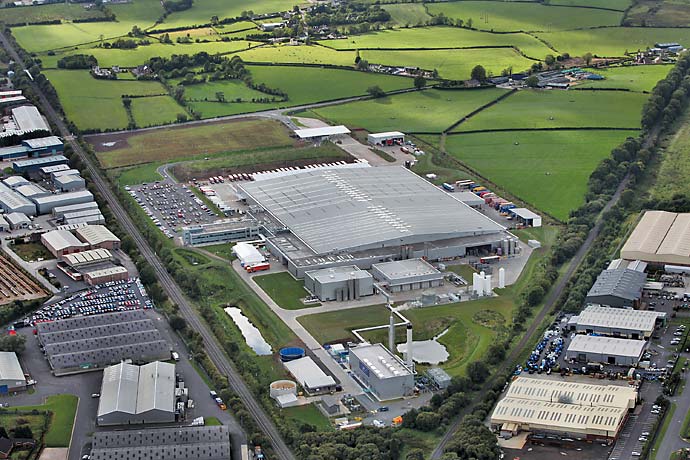