From the heart of Germany, biotech firms
deliver breakthrough therapies to treat
ailments around the globe. 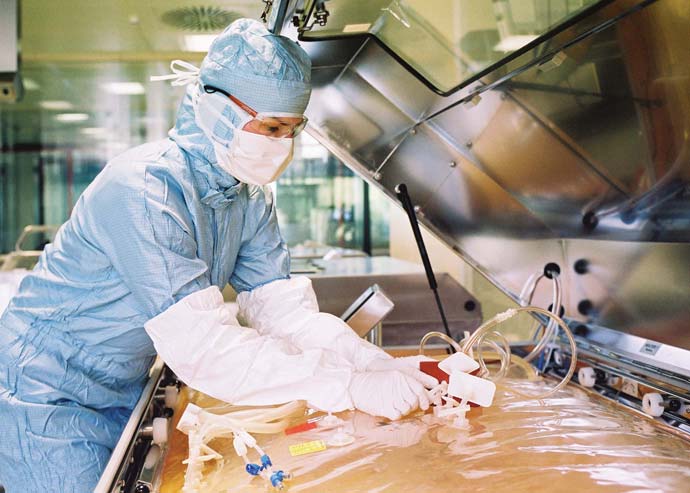 IDT Biologika GmbH saw its business and its work force nearly double between 2003 and 2010.
by RON STARNER
T

he biggest breakthrough in fighting the global battle against diabetes didn't come in a lab in San Diego, Boston or one of the other well-known U.S. life-science clusters.

It came in Saxony-Anhalt, Germany, a Central German state that is now one of the leading centers for biomedical research in all of Europe.

Probiodrug AG, based in Halle, developed an enzyme to regulate blood sugar and licensed it to Merck, Bristol-Myers Squibb, AstraZeneca, and Johnson & Johnson.

"We are the largest private German biotech company," says Dr. Hans-Ulrich Demuth, vice CEO of Probiodrug. "We were founded in 1997, and the diabetes breakthrough makes a lot of money for the company today."

In fact, it has generated $609 million in royalties to date for the rapidly growing firm. "That success has allowed us to focus on generation of new drugs," says Demuth. "We started developing a new therapeutic approach to Alzheimer's disease in 2008, and on July 20 of this year we published a paper announcing our new approach targeting peripheral inflammatory disorders."

The company employs 75 workers, including 50 in Halle and 25 in Munich.

"We are a fully integrated pharmaceutical development company," Demuth says. "We exist on our own revenues, and we are attracting new investors, including the largest biotech investment company in the European Union."

Demuth says that several key location factors make Saxony-Anhalt the ideal home for Probiodrug. "Saxony-Anhalt is not the richest state in Germany, but it has great science history in Halle and Magdeburg," he says. "Halle has the fifth largest university in Germany. We already have formed the second largest biotech cluster in Germany. The largest pharmaceutical faculty in Germany is in Halle, and four biotech centers have been created over the last 10 years in this area. We can get a very dedicated work force with master's and Ph.D. degrees to come work for us. We compare very well to different regions in Germany."

Demuth notes that his firm is expanding even though "investment in this new area of research is extremely expensive. But the environment here is very stimulating. This area has highly educated people in chemistry and biochemistry. The local state is supporting the medical industry with appropriate programs. The state-owned investment bank is using grant money to support research, and we have used that quite a bit over the years."

He adds that "there is an infrastructure of pharmaceutical companies all over the place here, in Magdeburg and other locations in Saxony-Anhalt, and large vaccine producers are based here as well."

Another leading biotech firm that is growing quite rapidly in Saxony-Anhalt is IDT Biologika GmbH, which specializes in the R&D and manufacturing of biologics. Founded in 1921, the company today employs 823 people, mostly at the corporate headquarters in Dessau-Rosslau.

IDT Biologika has invested about €250 million into its Saxony-Anhalt operations since 1993 and has seen its business grow from €57.2 million in 2003 to €112.7 million in 2010. The firm's work force has nearly doubled in that time.

Most chemical and manufacturing industry sites are located in one of three clusters in the state: Bitterfeld, Leuna or Buna Schkopau.

Biotech operations in the region are also supported by the presence of Europe's largest 7-Tesla-magnetic resonance tomograph in Magdeburg, which allows for optimal research conditions in the field of non-contact analysis of cerebral biochemical processes.

This investment profile was prepared under the auspices of IMG, the Investment and Marketing Corporation of Saxony-Anhalt. For more information, contact Kristin Gabor, regional manager of IMG for North America, at +49 (0) 391-568-9922 or by email at kristin.gabor@img-sachsen-anhalt.de. On the Web, go to www.invest-in-saxony-anhalt.com.