When it comes to energy in this region, terminals are only the beginning. 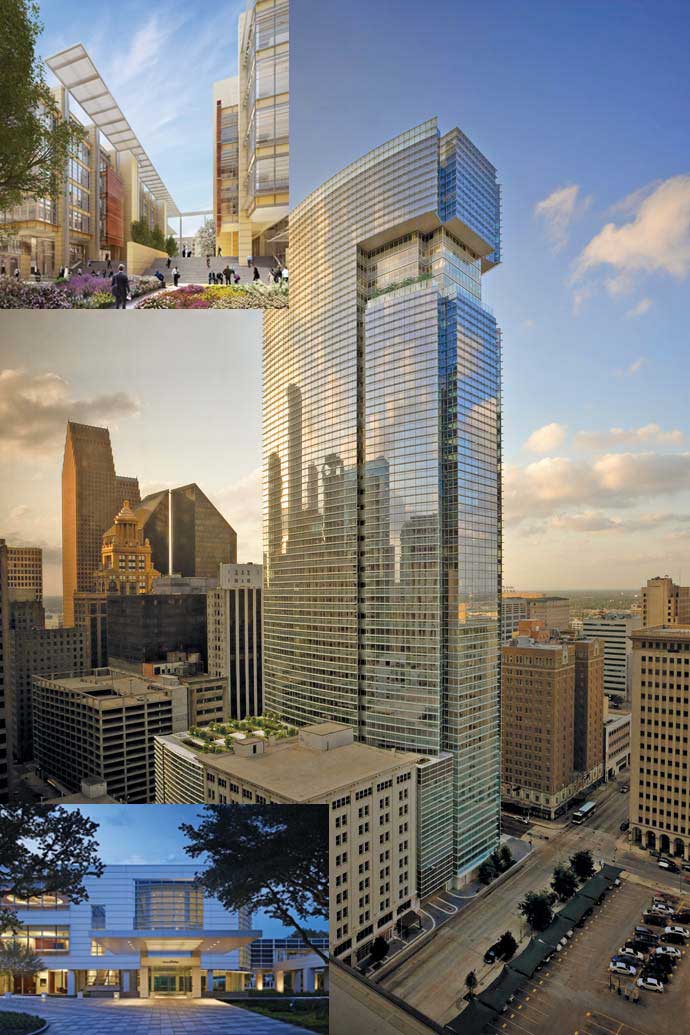 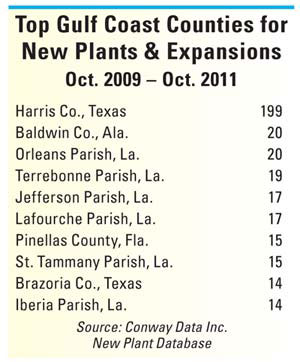 ifty-six counties and parishes define the U.S. shoreline of the Gulf of Mexico, simultaneously dishing up the Gulf’s bounty and taking what it dishes out. Between October 2009 and October 2011, Greater Houston’s Harris County showed the most new plant and expansion activity among those jurisdictions by a very long shot, followed by Baldwin County, Ala., a slew of Louisiana parishes, and Pinellas County in Tampa-St. Petersburg, Fla.

Houston was also No. 1 among large U.S. cities in the Milken Institute’s annual survey of best-performing cities, released in mid-December. And when The Wall Street Journal’s Marketwatch on nearly the same day released its 2011 “Best Cities for Business” list, a survey analyzing 102 metro areas in the country, it showed that the New Orleans region made the largest gain of any metro on the list, rising 44 positions from 77th in 2010 to 33rd in 2011. As recently as 2009, the region was in the bottom 10 of the list. Among other Gulf Coast cities, Houston was No. 14 on the list.

While Tampa was No. 79 on the Marketwatch list, a report released in October by Headlight, LLC, a spinoff of Avalanche Consulting (Austin, Texas), found that Tampa was No. 3 among the best performing large metros with the highest job growth rate of summer 2011. Cape Coral-Fort Myers, Fla., was No. 1 among medium-sized metros.

The coastal counties have also done their share to boost the employment picture for their states: According to U.S. Bureau of Labor Statistics data, Texas led the nation in positive employment change between January and November, with 144,550 new jobs added, representing 13.4 percent of national jobs gained. Louisiana was fourth, with 31,700 jobs representing 2.9 percent of the national figure.

While the chemical, logistics, and shipbuilding industries make a strong showing, by far the strongest surge on the Gulf Coast continues to come from energy and related field and engineering services. More is on the way, including the December 14 decision by Chevron Phillips Chemical to locate a high-dollar ethane cracker and ethylene derivatives complex in the region.

The company’s existing Cedar Bayou facility in Baytown, Texas, would be the location of the new ethylene unit. The company has executed agreements with Shaw Energy and Chemicals to design a 1.5 million metric tons/year (3.3 billion pounds/year) ethane cracker. That complex is home to the largest loop slurry high-density polyethylene plant in the world, built with BP Solvay (now Ineos).

Chevron Phillips Chemical would then build two new polyethylene facilities, each with an annual capacity of 500,000 metric tons. “The new polyethylene units would be located either at the Cedar Bayou facility or a site nearby the Chevron Phillips Chemical Sweeny facility in Old Ocean, Texas,” said the company. “A final site selection decision for these units is anticipated during the first quarter of 2012.”

Old Ocean, in southwestern Brazoria County, got its name from an oil field discovered in the 1930s.
At the announcement, made in Dubai, Peter L. Cella, president and CEO, said that EPA and Texas Commission on Environmental Quality air permit applications for the new cracker were to be filed within the week. He indicated that the project is on track for final approvals in 2013, and would be completed by 2017. The family of three projects would create approximately 400 long-term jobs and 10,000 engineering and construction jobs, said the company. Total investment, according to published reports, would come to approximately US$5 billion.

“It is our opinion that this project offers unique advantages,” said Cella, “including co-location of the cracker with our Cedar Bayou facility and other ancillary assets such as our broad feedstock and ethylene pipeline and storage cavern networks, proximity to the expanding natural gas liquids hub in Mont Belvieu and utilization of proprietary technology to meet the growing demand of our customers.”

A similar complex with a similar investment total is being studied by South Africa’s Sasol Ltd., which would locate the projects at its existing Lake Charles Chemical Complex in Westlake, La., where the company is also looking at other facility expansions in the area of liquid fuel production. Dow is pursuing its own family of ethylene and downstream projects in Texas and Louisiana.

Chevron Phillips Chemical, with its joint venture partners, currently has 36 production facilities located in the United States, Colombia, Singapore, China, South Korea, Saudi Arabia, Qatar and Belgium. The company is nearing completion of a new plant in Borger, Texas, which will double the company’s polyphenylene sulfide production. And it continues to maintain one of its four global research and technology centers in Kingwood, Texas, just northeast of downtown Houston.

Spokes and Hubs Proliferate
In Mont Belvieu, just east of Houston and north of Baytown, Enterprise Products Partners in October announced its fifth natural gas liquids (NGL) fractionator had begun commercial operations, bringing total nameplate capacity at the partnership’s Mont Belvieu facility to 380,000 barrels per day. But it won’t stay there for long. The company already has started constructing its sixth fractionator, where service is projected to begin in early 2013, at which time the unit will be fully contracted. The partnership also expects its new Yoakum cryogenic natural gas processing facility in Lavaca County, Texas, to begin operations in mid-2012. In November it announced the addition of another train at that plant to handle expected demand.

“Rising domestic NGL production from the shale plays has led to a cost advantage for the U.S. petrochemical industry favoring domestic NGLs over imported crude oil-based derivatives,” said A.J. “Jim” Teague, executive vice president and COO for Enterprise’s general partner. Enterprise expects the conversions and expansions of existing petrochemical facilities could result in 135,000 BPD of new ethane demand in addition to the 1-million-BPD level reached during the third quarter of 2011. Construction of new ethylene crackers could generate another 330,000 BPD of ethane demand.

On Nov. 2, Enterprise and Chesapeake Energy Corp. announced they have entered into a long-term contract whereby Chesapeake would anchor Enterprise’s proposed 1,230-mile (1,980-km.) ethane pipeline from the Marcellus and Utica shale regions in Pennsylvania, West Virginia and Ohio to the U.S. Gulf Coast. Through Mont Belvieu, ethane production from those shales would ultimately have direct or indirect access to every ethylene plant in the U.S. The pipeline could begin commercial operations in the first quarter of 2014.

Storage, Flow and Synergy
Meanwhile, crude oil, pet coke and bulk liquids terminal projects are under way in the Houston area from OmniPort, Oiltanking Partners and Kinder Morgan, among others.

On Nov. 16, just after Transcanada saw a U.S. decision on its Keystone XL pipeline delayed by the Obama Administration, Canada’s Enbridge announced it had agreed to reverse the direction of crude oil flows on the Seaway pipeline to enable it to transport oil from Cushing, Okla., to the U.S. Gulf Coast.

A similar flow reversal demonstrates the network of related projects throughout the Gulf Coast: Houston-based Cheniere Energy’s construction of an LNG liquefaction plant at the Cameron Parish, La., site of its LNG receiving terminals found its first customer in October in BG Group. Work was completed in February 2011 on BG Group Place, the natural gas giant’s new headquarters in downtown Houston. It is the first LEED-CS Platinum certified high-rise in the state of Texas. 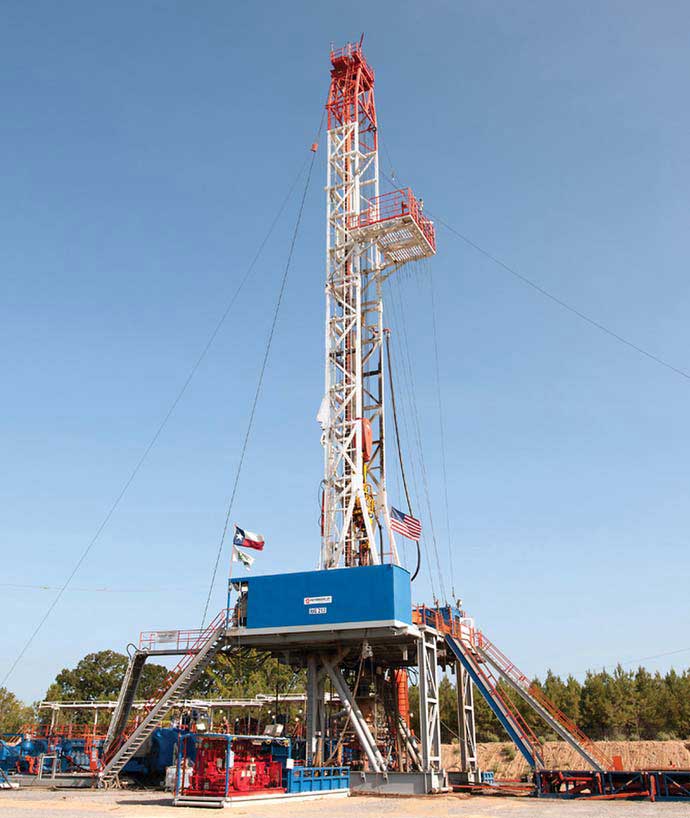 BG Group’s assets include this rig in the Haynesville Shale.