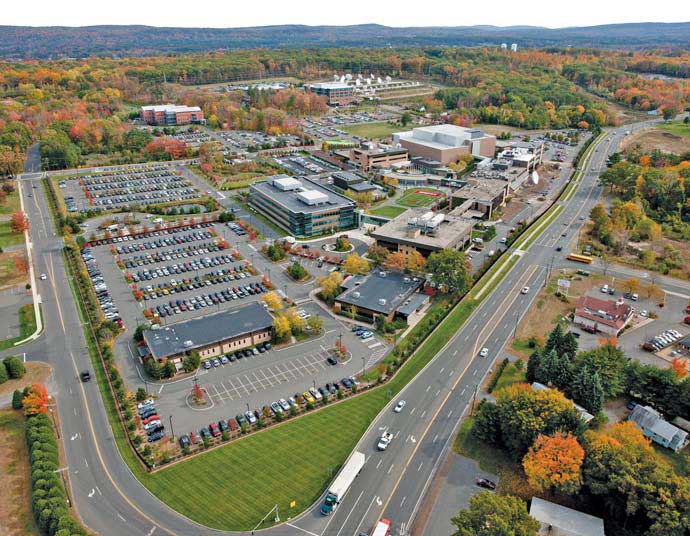 ESPN’s campus in Bristol, Conn., has been expanding ever since the network started 30 years ago. The latest new building, the $100-million Digital Center 2, was announced in August.
by ADAM BRUNS
C

assidy Turley in November announced it had secured a long-term lease for NBC Sports Group in Stamford, where the network giant will consolidate all office, studio and production teams from two Stamford locations and from “30 Rock” in New York City in 300,000 sq ft. (27,870 sq. m.) of office, production and studio space at the former Clairol headquarters.

But when it comes to televised sports, many people immediately think of a company based just an hour up the road in Bristol. Since getting its start in 1979 in what was then a sleepy hamlet, ESPN has become digital wallpaper in the daily consciousness of fans everywhere. ESPN Plaza includes more than 1 million sq. ft. (92,900 sq. m.) on 116 acres (47 hectares), with additional office space (400,000 sq. ft., or 37,160 sq. m.) rented nearby. A portion of the campus is across the town line in Southington, where many of the network’s satellite dishes reside, helping provide that city more than $1.2 million in annual taxes.

Mike Soltys, vice president of communications at ESPN, says the network is a highly visible company in the middle of “a state with limited job growth and complaints from young people that there aren’t exciting places to work.” How excited are young people to work at ESPN? The most recent round of summer internships fielded 13,000 applicants.

In August 2011, ESPN announced its latest expansion, which like NBC’s has included moving employees from the Big Apple — in this case the staff of ESPN the Magazine. The project also includes the 19th building on campus, Digital Center 2. ESPN plans to invest more than $100 million in the 193,000-sq.-ft. (17,930-sq.-m.) building.

ESPN is one of the companies taking advantage of a new state economic development program called “First Five,” which rewards with incentives the first five companies to step up and create 200 new jobs within two years, or invest $25 million and create 200 new jobs within five years. The decision came after the network had constructed two new production facilities in Los Angeles and Austin, both of which were candidates for further expansion, says Soltys. In addition to relationships with past governors and current Gov. Dannel Malloy, Soltys says the network has likewise maintained a positive relationship with Bristol city leaders, and has benefited from local tax abatements, typically over six years following construction.

Asked whether the state’s high-priced electrical power has been an issue, he says yes, despite more energy-efficient elements in recent construction and a discounted rate due to ESPN’s ability to go off grid at peak usage.

“We have a very large generator that can power our entire facility, and have worked to keep that going,” he says. ESPN fanatics will recall that power supply played a part in one of the more classic in a series of popular promo spots featuring famous athletes visiting the campus, with cyclist Lance Armstrong pedaling away in the basement to generate electricity. “We recycled that during the big Connecticut power outage,” says Soltys.

The ad campaign started more than 15 years ago with the tongue-in-cheek premise that Bristol was the center of the sports world. “But it was difficult to get anybody to visit us,” says Soltys. “Now every day you see some celebrity — Terry Francona was here in the lunchroom today, and we just had the University of Kentucky basketball team here to practice in the ESPN gym.”

The gym, along with a new child-care facility, didn’t exist 15 years ago. But that was before ESPN started to run up the score.

“What was a tongue-in-cheek joke,” says Soltys, “has become reality.”