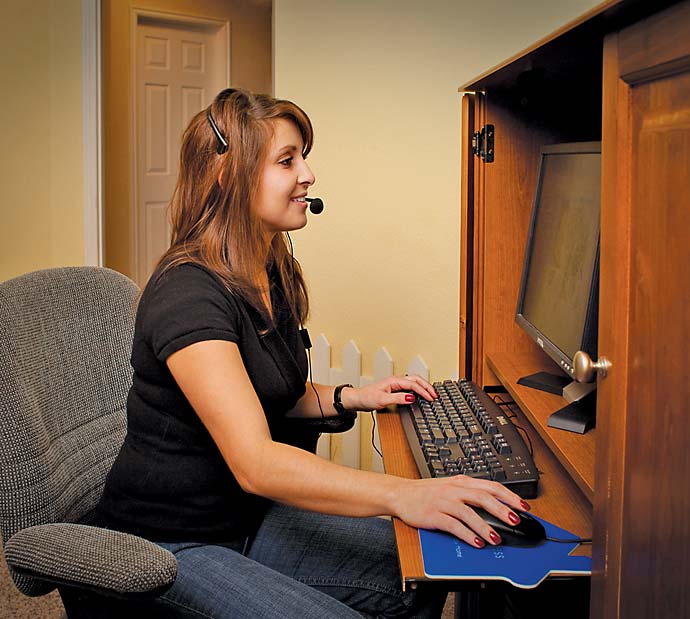 mployment of home-based agents continues to be a growing trend in the contact center world. Some traditional brick-and-mortar contact center operators use home agents to supplement their centers, while several companies employ home agents exclusively.

One of a growing number of companies specializing in home agents is Denver-based Alpine Access, which employs more than 5,000 agents and plans to grow to 7,000 by the end of 2012. The company sees home agents as a way for companies to reduce costs.

"We see it as a long-term trend," says Chad Lyne, director of strategy for Alpine Access. "We have grown 75 percent this year."

"A lot of companies that were running at high utilization before the recession are now at 50 to 60 percent," Lyne says. "It's obviously a big fixed-cost structure. A lot of companies are consolidating operations and also looking at home agents."

Alpine Access's nearly 4,300 U.S. agents are widely dispersed in 1,700 cities in 40 states. The company also uses about 800 in seven Canadian provinces. About 35 percent of Alpine Access agents are affiliated with the military in some way. Another significant portion is comprised of stay-at-home moms, many of whom work a split shift. The average age of the company's agents is about 38, which is several years older than most facility-based agents.

Home agents jobs are in high demand despite the relatively low average pay of $8 to $11 per hour, which is about $2 per hour less than center-based agents, Lyne says. Alpine Access received 320,000 job applications in 2010, he says. Lyne says clients he has permission to name include Office Depot, AAA and the IRS, with others coming from the financial services and wireless sectors.

"One of the other areas where people see value is flexibility," Lyne says. "You don't have a fixed asset that might be underutilized if the economy goes bad. At the same time, if things improve, where do you put people if you have space for 500, but need 700? We have a technology client that went from 100 to 1,000 agents in three months. It's physically impossible to ramp to that scale in that time frame in bricks and mortar."

Alpine Access is a participant in the Jobs4America Coalition, a partnership with the FCC and private businesses to create 100,000 call center jobs over the next two years. Many of those jobs will involve home agents as broadband connectivity expands. Lyne says Alpine Access plans to hire 4,000 people in the next two years as part of the program.

Many contact center outsourcing firms have deployed home agents as a supplement to their real estate-based operations. One of the largest in this area is Convergys, which experimented with home agents in the late '90s, and came back to it in a larger way about five years ago as technology advanced. The company now uses about 3,000 home agents out of a total of 63,000 worldwide.

"At Convergys we satisfy customer care in many realms," says Rick Owens, senior director of operations for the company's Home Agent Program. "This includes IVRs [interactive voice response], as well as offshore and onshore solutions. We look at home agents as another one of our solutions. Adoption has been pretty steady, but it's not to replace bricks and mortar, it's to complement it. Three of our top four clients have adopted it and are embracing it."

Flexibility is the major advantage for Convergys, Owens says. Buildings can be kept full and when the need arises, home agents can be added in a hub-and-spoke model.

"We can effectively use our buildings," Owens says. "We train around bricks and mortar and then we have our agents work from home. We also have a large number of 100-percent-remote agents. You need certain qualifications for this. We don't care where they are geographically. It really is a technology-driven evolution."

Owens says Convergys looks for seasoned agents with the discipline to work on their own for its home agent program.

"We have a mix that includes stay-at-home moms, senior citizens, the physically challenged and wounded warriors," Owens says. "Convergys likes them because they are highly disciplined and educated and appreciate being able to work at home."

Convergys and other companies utilizing home agents typically require agents to use their own computers. Convergys supplies the needed software, which is downloaded and installs itself.

"We don't make this real simple for them," Owens says. "We are looking for Internet athletes with good PC skills. When the software installs, it makes their computer a virtual terminal. The only thing it can do then is connect to our infrastructure."

APAC Customer Services, based in Bannockburn, Ill., a suburb on the north side of Chicago, is growing globally, and in the U.S. The fast-growing company currently has 13,000 agents at 19 contact centers around the globe.

APAC recently opened a contact center in Aguada Park, a business center located in a free trade zone in Montevideo, Uruguay, where it employs 300 and has plans to ramp up to more than 600.

Scott Wilson, APAC's vice president for support services, says the site search that led to Uruguay began after the company opened a center in Santo Domingo, Dominican Republic, in October 2009. APAC wanted a second operation in Latin America. Wilson looked at sites in Mexico, Guatemala, Colombia, Peru and Chile before focusing on Montevideo.

"I was really looking at Santiago and Montevideo, honestly, to cross them off the list," says Wilson. "The cost structure in Santiago proved to be prohibitive. I decided to check out Montevideo while I was in the region because it was just an hour-and-a-half flight. I didn't really know anything about Montevideo, so some surprises popped up. It has a free trade zone structure that, in my opinion, is hands down the most attractive in Latin America. It's a 'no, no, no' situation with no customs, no VAT, no income tax, no minimum capital requirements and no local ownership requirements. You pay for their equivalent of Social Security and your employer's share of employee income tax obligation and that is the entirety of your tax burden in the country."

An added bonus in Montevideo, Wilson says, is a preponderance of people who speak European languages. That fit in with the needs of some of APAC's clients who have been requesting European language services. There is also a good labor pool in general.

"Montevideo is a relatively un-penetrated market. There are a couple of big providers, but they are 45 minutes out of the city. We are in a free trade zone downtown and students can get there very quickly.

Another company in rapid growth mode is C3, which recently opened a site in Sofia, Bulgaria. Rick Ferry, C3's president, says that search was driven by two factors: a large prospective client in the hospitality business who is expanding in Europe, and forecasts that show Eastern Europe as an emerging location for the service sector.

"When you peel the onion back on Eastern Europe, you see that it's very multilingual and it's very rare to find someone who isn't fluent in at least three languages," Ferry says. "There is a great emphasis on education, which oddly enough is a leftover from the communist regimes."

As the search narrowed, Ferry looked at the Baltic states, where multilingual skills are in abundance, but the right space was elusive. He also looked at Poland and Hungary, where costs were slightly higher.

"We came to the Slavic regions, eventually coming into Bulgaria where we found in Sofia real estate agreements that were extremely favorable," Ferry says. "There is real estate in abundance and we can also support 17 languages."

When the time for further expansion comes around, Ferry says he will be working back down his list compiled from his primary research and will look at Budapest and Grozny, Poland, as potential locations. He expects C3 to be operating in one of those cities by late 2012. Another expansion will soon come in the Philippines as the company adds a second location. Its first center in Manila has 1,150 agents.

C3 also takes a measured approach when it comes to home agents, preferring to keep them close to an existing contact center. Ferry says home agents have done especially well in Glasgow, Scotland, where half of the company's agents work at home.

"We like to have people within striking distance of a central hub," Ferry says.