Too many companies are looking for logistics advantages in all the
wrong places, warns a supply chain expert. 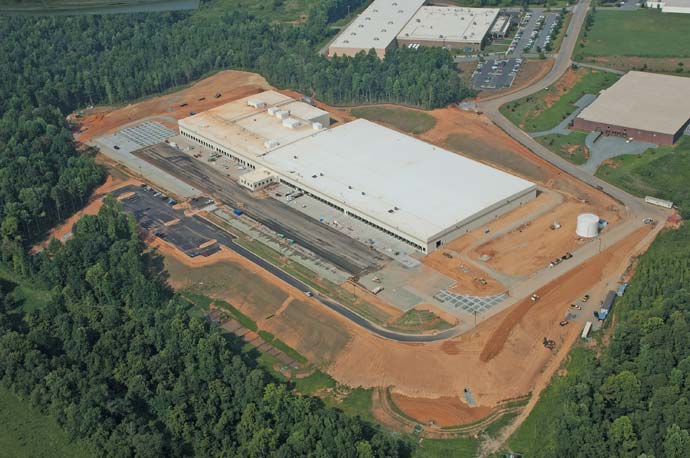 AWG says its new facility will save its current retailers more than $6 million annually in freight costs, lower its transportation expenses and improve the availability of fresh food along the Gulf Coast.

The 720,000-sq.-ft. (66,888-sq.-m.) facility is being built along the I-10 corridor at the intersection of I-59 and I-12, just to the north of New Orleans. AWG says the location offers great accessibility to independent grocers in Louisiana, Texas, Mississippi, Alabama, Georgia and Florida. The operation will employ 288 when it opens in January 2013.

"We have a responsibility to the members of our cooperative to provide them with the best available food and related products at the lowest possible cost," said Jerry Garland, AWG's president and CEO, in late June 2011. "This new division will significantly lower the cost of groceries to our members' stores and expand our abilities to further achieve that goal for our members and future members in this region."

Officials for the company said the new division is expected to provide approximately 588 construction jobs. The company expects to open the facility in January 2013.

The facility employs 35. The new center will help support the company's growth plans in North Carolina and surrounding states, which the company has identified as a key region for its growth. Initially, it will service more than 70 stores within a 150-mile (241-km.) radius. The facility features the latest in green, energy-saving technologies, including lights that only operate when a person is present and an HVAC system with smart thermostats.

Chuck Taylor has been in the supply chain business for more than 40 years and currently is a consultant to the industry. He has sounded the alarm for several years regarding the waning years of cheap oil. Companies making logistics location decisions must factor in these equations going forward, he says.

"I've seen a lot of decisions on site selection based on cheap real estate and tax abatements," he says. "Those things are nice, but those things eventually run out, whereas transportation is forever. A lot of supply chain facilities are located in the wrong places, and that will come back to haunt companies. Going forward, what I would tell people in this country would be to look at historically transportation-friendly places, and these places would be unlikely to stand out. They would be places like St. Louis, Detroit and Chicago. Maybe you would call them Rust Belt cities, but they have developed before World War II. I would be much less likely to look at places that have developed after World War II. Any place that is totally dependent on oil will have a tough time going forward."

Taylor says regions that have developed based on cheap energy will have problems.

Rob Wheeler, a vice president with CresaPartners who specializes in logistics projects, says the volatility and rising cost of fuel is a hot topic in logistics. He says companies have plans to be more regional in their approach.

"Supply chain folks are considering that on an everyday basis — what's happening with energy and how it will affect their business," Wheeler says. "More and more companies are looking at intermodal transportation to mitigate some of these risks. Intermodal parks are popping up across the country. A shift to rail is an overarching trend. There is an obvious shifting to rail, and real estate around rail will get a premium. The key from a site selection perspective is understanding that transportation is eight to 10 times more expensive than rent. People are becoming more and more focused on that." 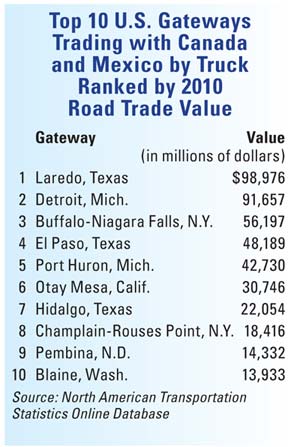 North American logistics specialist Exel and DHL Supply Chain are building a 250,000-sq.-ft. (23,225-sq.-m.) build-to-suit distribution center in Laredo, Texas. Slated for completion in July 2012, the facility will serve as a hub for the company's Logistics Without Borders, an end-to-end supply chain service that provides both companies' customers services necessary to ship across the U.S./Mexico border.

The operation will create 100 jobs initially and will be a multi-client, multi-sector operation that supports Exel's and DHL's customers' supply chains on both sides of the border. The companies anticipate serving customers from sectors including technology, automotive, engineering and manufacturing. Facility features will include comprehensive logistics services and certifications such as Transported Asset Protection Association (TAPA-A) and Customs-Trade Partnership Against Terrorism (C-TPAT). Facility plans and construction will incorporate sustainability features including energy-efficient lighting, landscaping and building materials, as well as low-flow plumbing and a recycling program. The company plans to pursue LEED certification for the site. If received, it will be the first LEED-certified distribution center in Exel's North American real estate network and in the city of Laredo.

"Laredo is among the top U.S. ports in North American trade volume and is a cornerstone to facilitate U.S./Mexico trade," said Luis Eraña, Exel's president for the technology, aerospace and service logistics industries. "So this area is absolutely a strategic location for Exel and DHL Supply Chain. We want to give existing and future customers access to a location and logistics solution that supports cross-border business objectives and also simplifies their logistics processes."

Major Florida landowners Lykes Bros. and Duda & Sons are teaming up for a mammoth master-planned logistics center on 4,700 acres (1,902 hectares) in central southern Florida. Plans call for development of 30 million sq. ft. (278,700 sq. m.) of manufacturing and distribution facilities. The center will serve as an integrated logistics hub for growing trade within the Americas and with Asia and Western Europe. The two companies are working with Cushman & Wakefield to develop the project. The team also includes Institute St. Onge, a leading supply chain investment advisory, consulting and engineering company; Ware Malcomb, one of the world's largest industrial master planning and architectural firms; and Rockefeller Group Foreign Trade Zone Services.

The site is located near Moore Haven on Highway 27 and is situated to supply more than 8 million consumers within the southwest, Heartland and southeast regions of Florida — from Sarasota and Fort Pierce to the north, to Naples and Miami to the south. That number is expected to grow to 9.5 million by 2020. The center will include a combination of distribution centers, warehouses, manufacturing facilities, mixing centers, refrigeration facilities, transload and cross-docks, and related logistics uses.

The site, currently a sugarcane field, was vetted for a large power plant several years ago. It is served by rail and highway to several ports, including the Port of Miami, Miami International Airport, Port Everglades, Port Manatee, Southwest Florida International Airport and the Port of Palm Beach. Rail service is provided by CSX and Florida East Coast Railway via the South Central Florida Express, a short-line railroad purchased in 1994 by U.S. Sugar that moved 116,668 carloads in 2010.

Mark Morton, senior vice president with Lykes Land Investments and project manager for both companies for the project, says the two venerable firms began an analysis of the land about three years ago with an eye toward reaping benefits from the Panama Canal expansion, due to be complete in 2014.

"We started to see the synergy and connectivity to be located between all the ports that are looking to expand into the emerging Latin America marketplace, of course including the Miami port getting to 50 feet [in channel depth]. It's been a journey of data collection and vetting the project. We see this as a business solution for manufacturers and distributors to reach the Latin American market and revert back to the U.S., mostly in the east. We look at Florida as a pier that extends itself into shipping lanes that figure into the changes involving the Panama Canal."

"The economic development professionals from Enterprise Florida all the way to Glades County are very supportive of what we are trying to do here," Richey says. "Both the labor availability and the cost of labor will be an advantage in addition to its size."

Richey describes the site, which is about an hour and 45-minute truck drive from the Port of Miami, as a "mini Inland Empire," a reference to the successful logistics region near Los Angeles.

"It will be a great gateway to Cuba in the future when it opens up, which we all believe will happen," Morton says. 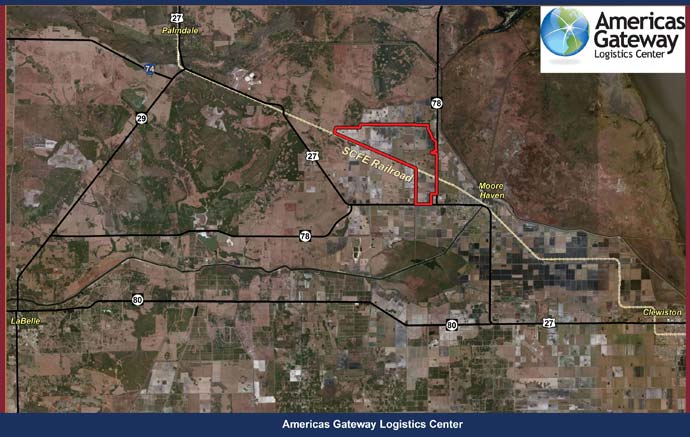 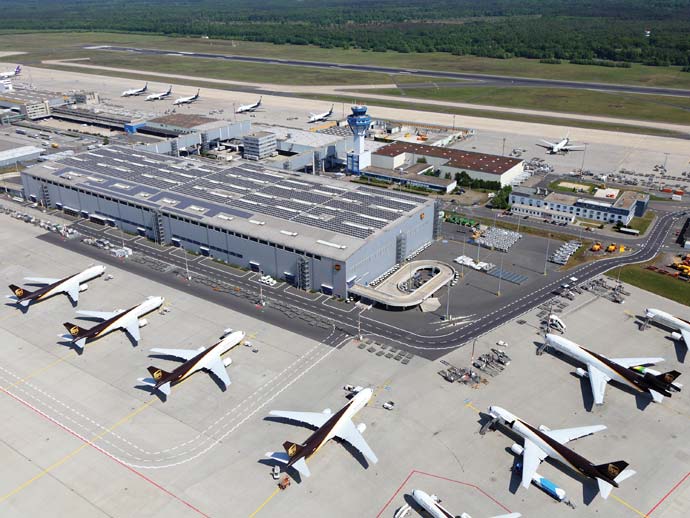 UPS is expanding its facility at the Cologne/Bonn airport.
Photo courtesy of UPS
U

PS and Deutsche Post DHL have major logistics projects in the works in Germany.

UPS is significantly expanding its European air hub facilities at the Cologne/Bonn Airport. The project, expected to cost an estimated $200 million, is the company's largest-ever facility investment outside the U.S. Due to be completed by the end of 2013, the project will equip the existing facility with additional state-of-the-art technology, including a major extension to the existing building. This extension would be partially dedicated to processing larger freight shipments. Together, these initiatives will significantly increase the hub's package sorting capacity from today's 110,000 to 190,000 packages per hour.

UPS said it originally chose Cologne/Bonn as the location for its European air hub due to its excellent location, the area's well developed road network and infrastructure, the good local weather conditions for year-round flight operations, the airport's excellent runway system and its proximity to a skilled and flexible work force.

"The Cologne hub has served us well for 25 years and continues to be exactly where we need it in order to best serve our customers on the important trading lanes within Europe and beyond to the Americas and Asia," said Jim Barber, president, UPS Europe. "This investment demonstrates our long-term confidence in, and commitment to, the European economy and its businesses that continue to produce goods sought after the world over."

UPS already is the largest employer at Cologne/Bonn Airport with almost 2,300 employees. The expansion is expected to create up to 200 new jobs at the hub by the end of 2013, a figure that will rise further as new capacity is utilized.

Deutsche Post DHL is investing over $1 billion in its German parcel delivery infrastructure. Its goal is to speed up its package delivery times to that of a letter (typically one to two business days in Germany).

At the beginning of the year, Deutsche Post DHL began testing new sorting solutions at three pilot locations in Greven, Kizingen and Neuwied. The tests have resulted in a 40-percent higher capacity and speed of parcel processing at these locations. Based on these results, seven additional parcel centers will be retrofitted to achieve an hourly throughput of 28,000 shipments. DHL Parcel's many business and retail customers will profit from the increased capacities at Aschheim, Augsburg, Bielefeld, Dorsten, Hagen, Regensburg and Saulheim as early as this Christmas season. In addition, other measures have already been taken, such as the deployment of 6,000 new parcel delivery vehicles and the redrawing of 650 parcel districts across Germany in an effort to improve service quality.

"This is the largest investment in our parcel infrastructure since the 1990s," says Jürgen Gerdes, corporate board member at Deutsche Post DHL. "It will expand our leading position in the market and ultimately make our parcel business the second strong pillar of our mail business. Our customers are going to see a dramatic improvement in our already market-leading quality and reliability. And we'll help e-commerce in Germany achieve the final breakthrough."