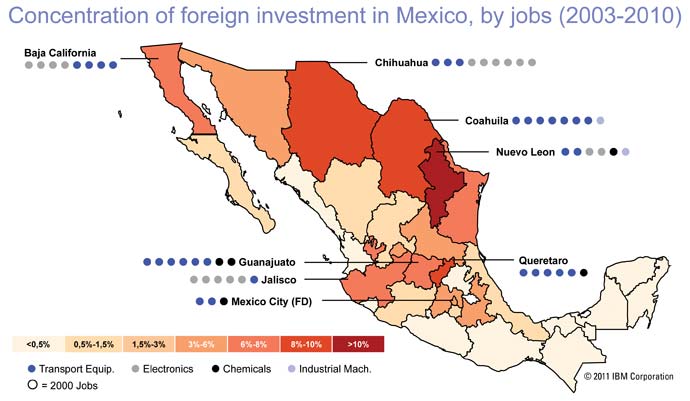 exico is the economic powerhouse of Latin America. It accounts for almost a quarter of the Latin American regional GDP and is home to 20 percent of its population. Mexico is also one of the leading destinations of foreign investment in the region, and for many companies located there it is a bridgehead to serve the U.S. market.

Mexico's geographic location and the interconnection of its economy with the U.S. economy are two of the primary factors that explain Mexico's success in attracting foreign investment. Mexico is the third most preferred destination for U.S. investments worldwide and the second most important destination for production projects by U.S. companies. This dependency on the U.S. has benefited Mexico, but has also made it more vulnerable to the fluctuations of the U.S. economy.

Most Popular, But Least Populated

The choices of foreign investment locations in Mexico are strongly driven by proximity to the U.S. The map above exemplifies the distribution and concentration of foreign investment in Mexico. Nearly a third of jobs created in Mexico during the period 2003-2010 were within 500 miles (804 km.) distance from San Antonio, Texas. These are concentrated mainly in the border states of Chihuahua, Coahuila, Nuevo Leon and Tamaulipas. Yet, with the exception of the state of Nuevo Leon, the border states are Mexico's least populated states, representing only 12 percent of the country's population.

From a sector perspective, foreign investment in Mexico has traditionally been driven by investment in transport equipment (mostly automotive and aerospace), which accounted for more than 40 percent of new jobs created in 2010. Besides being the most important investment-attracting sector in Mexico, transport equipment is also a sector that has seen a continuous strong growth with an average growth rate of 17 percent over the past eight years. Electronics and chemicals are the other two important investing sectors in Mexico, together accounting for nearly a quarter of the jobs and with strong growth trends (at around 6-7 percent on average per year). In addition to these traditional sectors, industrial equipment and business services have seen very strong growth in recent years, which will likely continue to be the case in the near future.

Production is by far the leading activity of foreign investment in Mexico. Foreign investment in production has created more than eight out of 10 jobs in Mexico over the past eight years, totaling nearly 300,000 jobs. Mexico is among the top 10 leading global destinations for production projects (it ranked 7th globally in 2010) led by China, and ranks second as a destination for production projects of U.S. companies. Growth in these types of projects however, has stalled in the past three years, influenced by the global financial crisis and the cooling of the U.S. economy.

On the other hand, Mexico has been experiencing a surge in business-support services projects, which include shared services and business-process outsourcing types of operations. In the past three years, business-support services have seen a growth in job creation at an average of more than 10 percent. This is positive news for Mexico, which has up to now been highly dependent on production activities, and is a sign of the diversification of its investment attraction pattern. However, for business-support services projects Mexico is competing for investment with already established locations such as Costa Rica and Colombia, and emerging locations such as Nicaragua. Mexico's strongest competitive advantage is the large size of its labor pool and the diversity of various second- and third-tier locations that are cost competitive to smaller Latin American competitors.

Mexico's advantage is its offer of a variety of locations for investors. Locations in the northern-border states provide good and speedy connectivity to the U.S. market and relatively good infrastructure.

The central states offer larger pools of labor at relatively competitive cost levels (e.g. Guanajuato, Aguascalientes, Durango). However, companies should not ignore the quality of business environments and especially the differences in safety levels across locations in Mexico as these can impact considerably their project operating costs over time.

In the past five years, there has been a significant surge in violence across the country due to the government-led war against the drug cartels. The annual death toll from drug-related murders reached 12,000 in 2010.

The World Economic Forum ranks Mexico amongst the countries with the highest cost on business from organized crime. Hence, companies considering Mexico as a potential location for their investment have to weigh the safety factor more heavily than in other countries, in addition to the trade-off between the quality of the business environment, availability of qualified staff and operating costs and other project-specific location factors.

Looking into the future, it is likely that we will witness a further diversification in terms of investment projects attracted to Mexico. The growth will still be driven by production-related projects in automotive and electronics sectors, with a further expansion of business-support services.

Mexico's NAFTA membership and rather mature industrial clusters will lure emerging countries' investors — notably from China and Brazil — who will choose Mexico as their production base for the North American market. These investors are more risk tolerant and are used to operating in difficult environments. Hence their location choices in Mexico will vary from those of U.S. and Western companies. They may choose locations more for cost reasons than for their quality of business environment or safety.

Although its regional dominance will continue to be challenged by emerging Latin American locations, Mexico is poised to maintain its top position in attracting foreign investment not only regionally but also globally. It is however very likely that it will increasingly spar for the top spot in Latin America with Brazil.


Automotive Projects Rev Up in Mexico 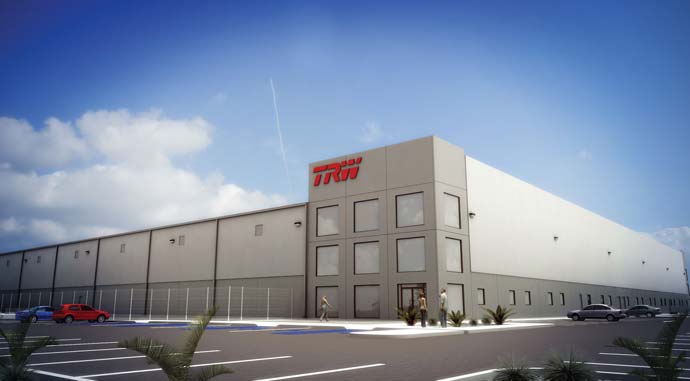 TRW Automotive Holdings plans to begin production of brake systems in Queretaro in 2012.
Image courtesy of TRW
B

ehr America, a leading thermal management components and systems supplier to major auto manufacturers in North America, forecasts that its Mexican operation in Ramos Arizpe, Coahuila, will continue to be an important contributor in the company's successful turnaround efforts.

Employment has grown from under 100 when the plant first opened to more than 700.With plant expansion and additional equipment installations, the growth in employment is expected to continue over the next several years.

German automotive lighting and electronics specialist Hella is also expanding in Mexico. Hella Lighting plans to open a product development center and expand its manufacturing facilities in Guadalajara. The company's new 9,000-sq.-ft. (836-sq.-m.) design and development center for lighting technology is expected to open in March 2012. Hella also is scheduled to complete a 15,000-sq.-ft. (1,394-sq.-m.) expansion of its Guadalajara manufacturing complex next June for the production of automotive reflectors for customers based throughout the Americas.

Hella has also increased the production capacity of its San Jose Iturbide plant this year with a 50,000-sq.-ft. (4,645-sq.-m.) facility expansion which will enable the company to increase production of transmission range sensors and surface-mount technology products. Since opening in 2008, the plant's work force has grown to more than 350 employees.

TRW Automotive Holdings Corp., a specialist in automotive safety systems, will open a new facility in the state of Queretaro to produce a range of advanced brake systems. The 150,000-sq.-ft. (1,393-sq.-m.) facility will manufacture hydraulic control units for a variety of electronic stability control systems.

"The new braking facility will complement our existing facility in Queretaro and represents a significant investment in advanced braking technologies and manufacturing processes. The plant will be geared to aluminum machining and clean room assembly environments to meet the stringent cleanliness requirements of hydraulic valve assembly," said Doug DelGrosso, global vice president of braking operations at TRW.