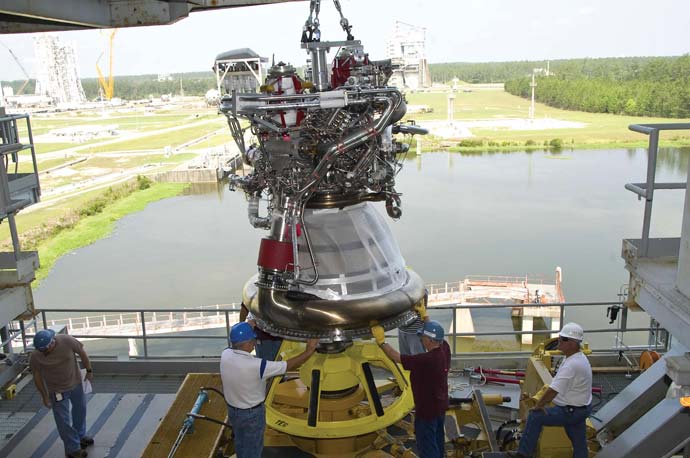 In June 2011, a J-2X next-generation rocket engine is lifted onto the A-3 Test Stand at Stennis Space Center. Testing of the engine began the following month. The engine is being developed for NASA by Pratt & Whitney Rocketdyne and could help carry humans beyond low-Earth orbit into deep space once more.
Photo courtesy of NASA
S 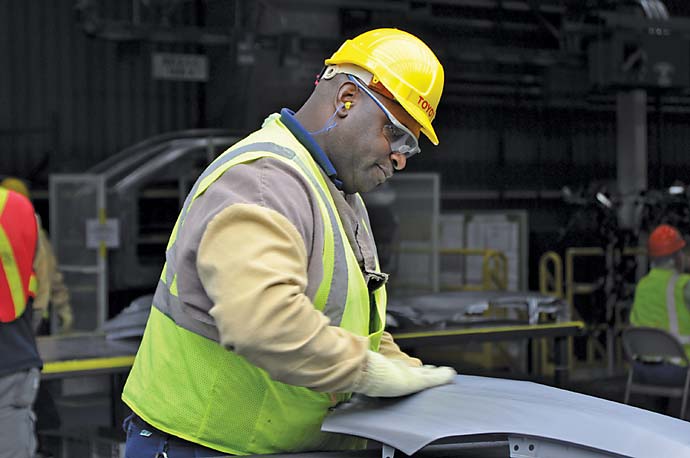 ilicon carbide in Starkville. Solar industry components in Senatobia, Grenada and Hattiesburg. Mission support for Lockheed in Clinton. Advanced composites for GE in Ellisville. Process equipment in Natchez. Biofuels from Columbus to Tupelo and beyond.

Like the Mississippi Development Authority (MDA), the state economic development agency that is celebrating its 75th anniversary this year, high tech is nothing new in the Magnolia State. But it's bringing new project momentum to cities and counties across the state. Here are some highlights:

Toyota team members on Nov. 17 celebrated the opening of Toyota Motor Manufacturing, Mississippi (TMMMS), the company's new $800-million plant outside of Tupelo that assembles the Corolla. TMMMS is Toyota's fourteenth North American plant. It has the annual capacity to produce 150,000 vehicles and will employ nearly 2,000. "Today is a great day for Blue Springs and the entire State of Mississippi," said Gov. Haley Barbour of one of the signature projects from his now completed tenure as governor.

"Our slogan is 'Always look for the best way, using our pioneer spirit,'" said Masafumi Hamaguchi, president of TMMMS. "The Mississippi work force has shown that they have this spirit."

The company aims to keep that work force coming. When Toyota announced the Blue Springs project, a donation of $50 million — $5 million a year for 10 years — was announced toward an innovative addition to the public school system in the Pontotoc, Union, and Lee counties. The Center for Professional Futures will be an education facility that will expose students in the eight school districts in the PUL Alliance counties in to professional careers through high-performance teaching and a modern learning environment.

Asked to appraise Barbour's economic development prowess, Arnie Williams, economic development director for Mississippi Power, cites Barbour's national and international stature, and says his leadership is "something we've thoroughly enjoyed riding on the coattails of. We couldn't have done as much as we did without him. People know he's a man of his word, a man about getting things done sooner rather than later. He will be missed tremendously. However, Phil Bryant is our new governor, and has basically communicated that if you liked what Gov. Barbour has been doing, stay tuned, because there's more of that to come."

Hattiesburg saw facility locations in 2011 from California-based Stion Solar and Italy's Bracco Diagnostics. Bracco is the newest tenant in the University of Southern Mississippi's $26-million, 60,000-sq.-ft. (5,574-sq.-m.) science incubator known as The Accelerator. Bracco's Healthcare Protective Products Division in Hattiesburg will utilize The Accelerator's resources to begin manufacturing a lotion that neutralizes chemical warfare agents that can prove hazardous to military personnel. The lotion is already used by the U.S. Department of Defense and most NATO militaries.

"We selected The Accelerator at The University of Southern Mississippi because their expertise and resources will allow us to further the development of new technologies in healthcare protective products," said Tim Henry, vice-president and general manager of Bracco's Healthcare Protective Products Division. The operation will employ 10 at the outset.

Stion held the ribbon-cutting for the $100-million first phase of its solar panel manufacturing facility, located in a former Sunbeam electronics facility. As documented in a Site Selection Online Insider report in early 2011, Stion plans to bring 1,000 jobs and a capital investment of over $500 million to the site.

"They've done a lot of work," says Williams of Mississippi Power. "The caliber of technology is mind-boggling."

"Stion and Bracco Diagnostics are cutting-edge companies," says Chad Newell, president of the Area Development Partnership in Hattiesburg, an organization that also saw two of its business parks certified as Project Ready sites in 2011 as part of a site certification program launched by Mississippi Power's economic development department. "Ultimately, we're a college town at our core, and that transcends every component of our economic development effort. Companies analyze numerous site selection factors prior to making location decisions, but certainly having an educated work force is a key consideration. Coupled with a pro-business environment and quality real estate choices, these companies were able to find just the right fit here in Greater Hattiesburg."

Pascagoula recently hosted the ribbon-cutting for Gulf LNG Energy's new LNG terminal at the Port of Pascagoula. MDA worked with company and local officials to assist with the project and provided guidance on available tax incentives. The terminal represents a $1.1 billion corporate investment and has created 50 full-time jobs for area workers.

Continuing work and incremental expansion by Pascagoula's two major employers, Chevron's refinery and Northrop Grumman's shipbuilding operation, continue to drive the area's economy. A recent report from the U.S. Bureau of Labor Statistics found that Pascagoula had a larger share of its employment in construction occupations than any other U.S. metro area, at more than three times the national average. But the mean wage for those occupations, at $19.07, was below the U.S. average of $21.09.

Arnie Williams of Mississippi Power says his economic development team is currently working 29 "hot prospect" projects that could all land within the utility's 23-county territory in the next 24 months.

"To have that many looking speaks volumes," he says.

He says eight to 10 prospects, most with aerospace or defense industry connections, have looked at Stennis Space Center in the past year. "Stennis is a jewel," he says. And his team plans to show it off to a couple dozen corporations at an event in spring 2012. The center has welcomed several federal data center locations in recent months.

In August 2011, NASA marked the official transfer of 1.6 million sq. ft. (148,640 sq. m.) of facility space from the U.S. Army to the space agency's John C. Stennis Space Center, poising the south Mississippi site for years of major expansion. The space now will be used to attract employers that complement NASA's mission, to support new government tenants and to offer added space for onsite work.

"Stennis Space Center is a major economic engine for this region," said Stennis Space Center Director Patrick Scheuermann. "This property transfer assures Stennis will not only remain an economic force for years to come but will grow even stronger and have an even greater impact on its surrounding communities."

In 2009, Stennis Space Center was designated a "project ready" site for high-tech businesses seeking a new location. It was the first Mississippi site to gain the technology park certification, indicating it meets demanding criteria in such areas as availability of infrastructure, utilities, transportation and facilities.

Bracco Diagnostics, a multi-national company with headquarters in Milan, Italy, is the newest tenant in the University of Southern Mississippi’s science incubator known as The Accelerator.
Photo courtesy of ADP