How Shale Gas
Is Redefining the
U.S. Energy Landscape

Game-changing increases in natural gas supply require pipeline
networks of game-changing reach and new facilities from which
to export much of it to high-demand regions globally. 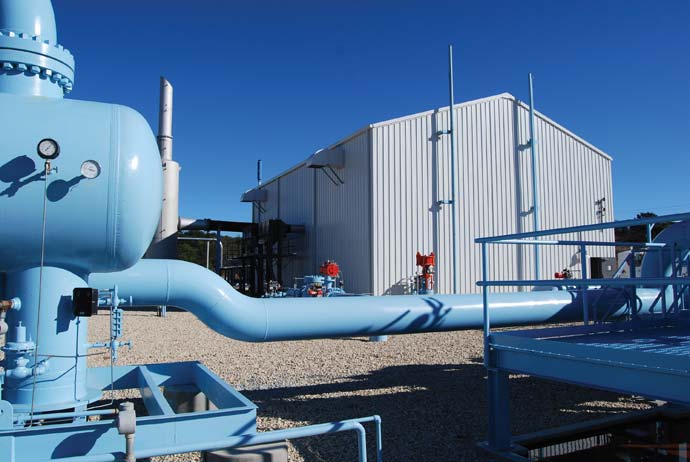 A compressor station on the Tejas Pipeline, part of the Kinder Morgan pipeline system.
Photo courtesy of Kinder Morgan
I

n 2009, the United States passed Russia to become the world's leader in natural gas production, and production has continued to climb to the current 80 billion cubic feet/day, as a result of shale gas. U.S. natural gas reserves are at their highest point since 1971, and year-on-year reserve additions continue to set records, doubling, in fact, from 2010 to 2011, thanks to shale gas. Shale gas, which made up only 1 percent of U.S. natural gas production in 2000, is now at 25 percent and expected to increase to nearly 50 percent by 2035, squeezing out imports. Shale resources and other upstream assets also continue to drive U.S. merger and acquisition activity, attracting foreign investors in the process. The total value of 2011 oil and gas sector merger and acquisition deals in the third quarter alone was US$48.8 billion, representing an increase of 135 percent over the third quarter 2010, dominated by transactions related to shale plays. Foreign investment comprised 76 percent of these deals.

Despite all this, doubts have persisted:  "Is shale gas for real?"

We may finally settle that question. Kinder Morgan has just announced the acquisition of El Paso for $38 billion including assumed debt. The combined company, to be called Kinder Morgan, Inc., will be the largest operator of natural gas pipelines in the U.S. with 22 percent of the U.S. natural gas pipeline network, 67,000 miles (107,803 km.) of pipelines that connect almost every gas field and consuming market in the U.S.

This deal is a game-changer because, without a pipeline, natural gas is not marketable. It's immobile, "stuck" near the production site. This lack of marketability has not only kept the natural gas price below $4/MMBTU, it has even resulted in the flaring of more than one-third of produced natural gas in 2011 in North Dakota, the location of the Bakken Shale. The thousands of wells drilled to produce the record-setting "bubble" now have a record-setting pipeline network to get to market.

Because pipelines are long-term investments that generate low returns, this transaction validates the potential of the shale gas discoveries, and lends stability to the natural gas market. Revenue to the pipeline operators is generated by transmission fees on long-term contracts, insulating the operators from fluctuations in the natural gas commodity price.

"This once in a lifetime transaction is a win-win opportunity for both companies," said Kinder Morgan Chairman and CEO Richard D. Kinder. "The El Paso assets are primarily regulated interstate natural gas pipelines that produce substantial, stable cash flow and have access to key supply regions and major consuming markets. The natural gas pipeline systems of the two companies are very complementary, as they primarily serve different supply sources and markets in the United States."

"We at Newfield are excited that as an industry an enhanced pipeline infrastructure will benefit the domestic development of a variety of shale plays," said Steve Campbell, vice president of investor relations for Newfield Exploration based in The Woodlands, Texas. "Natural gas needs pipelines to reach the market. Domestic U.S. shale plays and their development means increased downstream opportunities and a way to help the U.S. become more energy independent."

Richard Kinder's bet on shale gas isn't just a long-term bet, it's also a well-timed bet. This deal has significant implications for several sectors:  electricity generation, downstream products, and other industries as well.

Natural gas, cost-competitive with coal at half the carbon emissions, is now the fuel of choice for electricity generation. New EPA regulations on particulates, mercury, and other toxic emissions are forcing the closure or retirement of 28 GW or more of coal-burning capacity, or about 8.9 percent of total U.S. coal-burning capacity. Recent increases in coal transportation costs are also problematic for coal. In addition, demand for electricity is forecast to exhibit slow but steady growth over the next few decades. These factors, taken together, are expected to be the primary driver of demand for natural gas in electricity generation over the next several decades. The U.S. Energy Information Administration estimates that 223 GW of new generation capacity will be needed between now and 2035, and that at least 60 percent of capacity additions are expected to be natural-gas-powered.

Utilities and end users are choosing the lower emissions and lower capital requirements of natural gas-fired facilities over other fuels, sending the clear message that the risk of natural gas price volatility is a risk worth taking in the current difficult policy environment for coal. The expanded pipeline network resulting from the Kinder Morgan-El Paso deal is expected to be especially significant in supplying higher-price electricity markets such as New York and Florida.

The expanded pipeline network will permit the natural gas "bubble" to move downstream, in enough abundance to stimulate new products and locations. Sasol has announced a $10-billion facility in Louisiana to manufacture diesel fuel from natural gas, creating 850 direct jobs and a new market for Haynesville Shale gas, and is studying a potential $4.5-billion ethylene complex for the same region. And that's not all. Dow has announced an ethylene cracker and two new propane dehydrogenation units, employing up to 500 permanent employees on the Gulf Coast, and Shell has also announced plans to build an ethylene cracker in Appalachia near the Marcellus Shale.

There are domestic and export implications for liquified natural gas (LNG) as well. Last year, Cheniere Energy was the first company in 35 years to receive export approval for LNG from its Sabine Pass liquefaction facility, and has signed an $8-billion contract with BG and another one with Spain's Gas Natural Fenosa for a total 7 million tons/year of LNG over 20 years. These commitments permit them to move forward on the first phase of the project: two LNG trains of four approved.

These exports will be directed primarily to Asia, the location of strong demand for LNG, in addition to prices four times higher than in the U.S. This demand is dominated by Japan and South Korea, whose economies are leading in economic recovery, and who together imported 64 percent of global LNG. Japan is replacing nuclear electricity generation capacity lost as a result of the earthquake and tsunami with LNG. Additional strong demand comes from China and India. Their national oil companies have been significant sources of the previously mentioned foreign investment in U.S. shale plays in an attempt to supply their own markets. China's imports alone of LNG increased by 67 percent between 2009 and 2010, driven by demand for electricity generation and air quality concerns.

The tide has turned — the U.S. is on its way to being not only the supplier of the world's LNG, but other fuels as well. The U.S. is already on course this year to be a net exporter of gasoline, diesel and other fuels for the first time since the post-World War II economy of 1949 — a prospect that was unimaginable even a few years ago.

The expanded pipeline infrastructure also opens up new opportunities for manufacturers or industries that require mass quantities of natural gas as a feedstock or as a fuel. Nucor, one of the largest steel manufacturers in the U.S., recently negotiated a 20-year agreement with one of North America's largest natural gas producers (unnamed), guaranteeing a long-term supply at a low cost for their new $3-billion Louisiana direct-reduction-iron (DRI) facility that will produce 5.5 million tons/year of sponge iron. Nucor has cited a stable supply of low-cost natural gas as a critical factor in its location choice.  The Kinder Morgan El Paso deal bodes well for the ability of regions within the reach of the combined pipeline network seeking to attract manufacturers with similar location factors.

At the same time, the Kinder Morgan-El Paso deal has prompted some concerns about antitrust issues and monopolistic behavior, and whether combining the networks would result in increased rates or other anticompetitive impacts. (Note: any increase in rates requires FERC approval.)  The region of greatest overlap is the Wyoming, Colorado, Nebraska, and Kansas region of the Niobrara Shale, but the company has indicated a willingness to sell assets in regions of overlap, if necessary, to make the deal go through. The Federal Trade Commission is set to review the specifics.

The impact of more natural gas reaching markets is expected to be reflected in upward pressure on natural gas prices. This will have some negative impact on specialty chemicals and other industries that rely on natural gas as a feedstock, but will also stimulate upstream development drilling operations in the "dry" shale gas fields such as the Haynesville and the Barnett Shales, both of which have seen drilling activity drop off in recent months.

The Question is Answered

The acquisition of El Paso by Kinder Morgan ensures that pipelines, the un-exciting, sensible, stable, low-return, midstream member of the oil and gas family, have now moved to center stage, confirming that shale gas is real and abundant over the long haul.

Charlotte Batson is Owner and Principal of Batson & Company, an energy and economic development consultancy. Comments and feedback may be directed to charlotte@batsonandcompany.com. 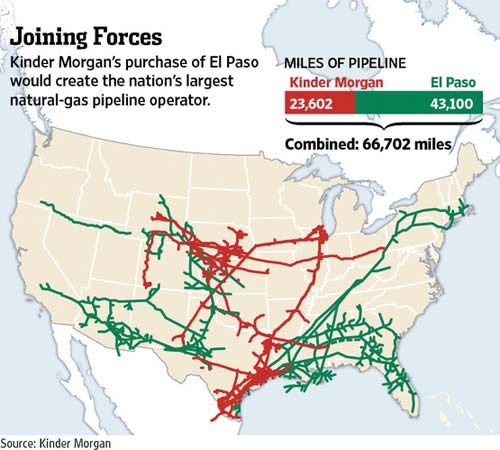