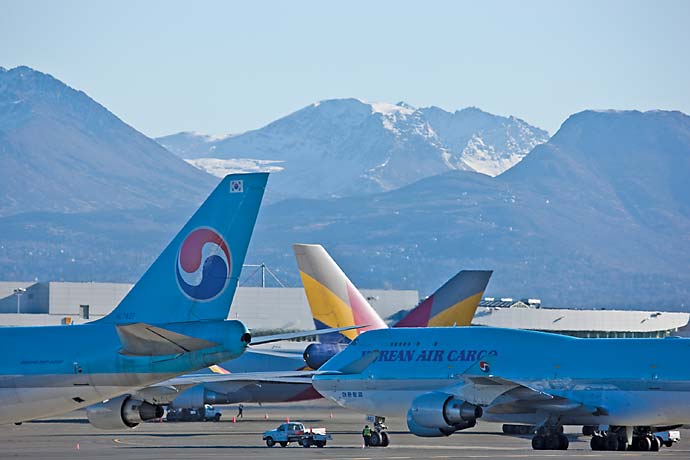 he state that gave us "Ice Road Truckers" and "Deadliest Catch" — reality shows that depict the hazards of navigating Alaska's roads and seas — is proving that transport of a different kind can be the safest and surest way to maximize industrial profits.

"Seeing 70 MD-11's land here every day makes this a pretty busy place," says John Parrott, manager of the airport that won the 2010 Air Cargo World Award of Excellence as rated by international air cargo carriers. "We are responsible for one of every eight jobs in the Anchorage area. In a metro area of 300,000 people, that is a pretty big chunk."

How important is air transport to Alaska's US$49-billion economy? "Cargo traffic provides 70 percent of the airport's revenue," says Parrott. "Aviation provides about 47,000 jobs in a state of 710,000 people, and 82 percent of the communities in Alaska are not served by the road system. They are served by boat or airplane. If you want to get something to a rural village, chances are that it gets there by air."

For global companies using the Pacific Northwest as a gateway to the Americas, many are increasingly turning to air transport as their preferred method of shipping.

One reason Anchorage is so popular as an air cargo hub is because it is 9.5 hours or less from 90 percent of the industrialized world. A second factor is the airport's competitive rate structure.

Also persuasive is Anchorage's exemption from regular U.S. Department of Transportation cabotage laws that restrict movement of international air cargo between aircraft. In Anchorage, international shippers can do that without penalty and then fly to other U.S. locations.

"We have very liberal cargo transfer rules here," notes Parrott. "The Stevens Amendment allows air cargo carriers to transfer air cargo between aircraft and between airlines. It is not deemed a violation of cabotage laws."

Non-stop flights for large jets departing Anchorage can reach Shanghai, Beijing, Hong Kong and other Asian destinations. "If they are landing here from Asia, they can proceed to Miami on the second leg," says Parrott. "They can maximize their cargo weight because they don't have to maximize their fuel load. No one is paying them to carry fuel. They are being paid to carry cargo."

Bill Popp, executive director of the Anchorage Economic Development Corp., says the airport is vital to the region's economic success. "There are over 25 air cargo carriers that are transferring goods from the Pacific Rim to here," he says.

Two other pieces of infrastructure will soon play a big role in further developing the Alaskan economy — the completion of the $780-million Knik Arm Bridge and the closing of the Kulis Air National Guard Base.

Sometimes referred to as the controversial "Bridge to Nowhere," the Knik Arm Bridge will connect Anchorage with available and developable land to the north, says Popp. "It offers tremendous opportunity for industrial, commercial and residential development." Construction of the project is slated to begin in 2014.

The closing of Kulis on the south side of Anchorage International gives 127 acres (51 hectares) of developable property to the State of Alaska. "This land is available for lease," says Popp. "Quite a few companies are negotiating with the state for long-term leases. About half of the property could be leased within the next 12 to 18 months."

The City of SeaTac, Wash., is also cashing in on the global shift toward air cargo transport. International logistics companies continue to relocate to SeaTac, including Leader Mutual, SDV and Kintetsu World Express.

Datasite is the largest tenant at ProLogis SeaTac Park after consolidating offices in Seattle and Bellevue into one location in SeaTac. Founded in 1992, the company offers comprehensive data storage and management services including off-site data storage, business records storage, electronic vaulting and secure shredding.

"SeaTac is very transportation-centric," says Jeff Robinson, director of economic development for the City of SeaTac. "The area has a lot of warehouses, as well as the largest indoor mall in the state of Washington. We target industries like logistics and warehousing. The Port of Seattle just completed an air cargo logistics strategy, and that will only enhance the prospects of this region."

Logistics is a big reason why Vestas American Wind Technology Inc. continues to invest heavily in the Pacific Northwest, including the company's new American headquarters facility in Portland, Ore.

As reported in the July 2011 issue of Site Selection, Denmark-based Vestas is developing a 172,000-sq.-ft. (15,980-sq.-m.) LEED Platinum headquarters in the Pearl District on the northwest side of downtown Portland. The $66-million project, slated for completion in April, is a redevelopment of an old Meier & Frank Depot Building built in 1928.

"It is sitting in a prime real estate area — some of the most expensive real estate in Oregon," says Andrew Longeteig, communications specialist for Vestas. "We have about 400 people who work at Vestas in Portland, and with this new building we will be able to accommodate up to 600 people."

Vestas considered relocating to Vancouver, Wash., across the river from Portland, or Denver, where the company has 1,700 employees. "In the end, we knew that Portland is a great place to do business," says Longeteig.