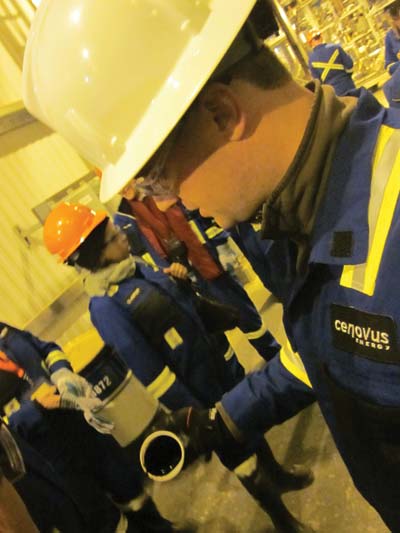 Drew Zieglgansberger, senior vice president, Christina Lake, Cenovus Energy, offers a glimpse of what all the fuss is about, at one of the company’s leading in situ operations.
E

conomist Thomas Faranda, in a spring 2011 talk before the Industrial Asset Management Council, called Canada a sleeping giant, albeit one that's about to wake up. And its alarm clock is perched on its Western half.

"Over the next 10 years, more assets will go into Canada than almost anyplace in the world," he said. "Alberta is the only province that could break off on its own and have no problem. All the money is made in western Canada."

As for Alberta's neighbor to the east, "No one is totally sure yet whether Saskatchewan has as much oil as Alberta ... or more," said Faranda.

In November, the Canadian Consulate flew a gaggle of U.S. press to Edmonton, then on to the Shell Albian oilsands mine operation and a growing in situ oil extraction operation run by Cenovus.

The first cultural signal from a trip to Alberta's energy region is the 16-to-1 ratio of men to women on the 50-seat flight to Edmonton from Denver. The veined and snowy landscape stretches away in whites and browns and blacks, the cultured marble countertop of North America … or perhaps its vanity.

At the Edmonton airport, signs alert arriving workers where to stand to wait for their shuttles to the Kearl and CRNL projects. Geography and even time itself are measured by these projects: Housing developments in Fort McMurray, where modest dwellings go for $700,000-plus, are referred to as "early Suncor" or "middle Albian."

At Albian we were schooled in how the oilsands lying close to the surface can simply be directly dug out and squeezed, once you remove all that overburden … a euphemism for "what's in our way." More than one individual said the land fairly "weeps" oil.

One of the world's biggest trucks, made by Caterpillar, came in to see us through what must naturally be the world's biggest garage door. These trucks alone are creating a ton of U.S. jobs at Cat and Michelin, whose plant in South Carolina makes the machine's enormous tires that go for $70,000 a pop. Those two U.S. companies are just a couple of the many active in oilsands activity, whether or not they're on site.

Take It or Leave It

The scale of an oilsands mine is stunning at first … and continues to be so later. We saw the Jackpine mine where the sands are now being dug, and we saw the original Muskeg mine, where the years-long process of remediation is under way, refilling a hole in the planet. It's a giant exercise in land recycling, albeit minus "the resource."

Air transport is increasingly favored among oilsands companies as the way to get its skilled workers in and out of project territory, where the companies usually provide lodging, meals and other amenities at what used to be called "man camps," but might now be called pop-up villages. Workers can fly in and out on very flexible seven-days-on/seven-days-off schedules, and make six figures to boot. Meanwhile, the pilots flying them have their own housing challenges: One I spoke with said he and seven of his colleagues had bunked in one hotel room near the Fort McMurray airport that afternoon in order to get their requisite rest.

Another pilot told me the round trip from Edmonton to the Fort McMurray area used approximately 400 liters of aviation fuel … one of the many grades of fuel refined from oilsands oil, including at the Shell Scotford upgrader and refinery we visited the day before. It's just undergone its own expansion, with a new office complex to boot, and is also embarking on a groundbreaking carbon sequestration and storage project.

Will the oil that TransCanada wants to export to the U.S. travel to Gulf Coast refineries via the Keystone XL pipeline project? One thing's clear from Alberta: There are two other major pipeline expansion projects on the books to handle all the growing oil production. They're pointed toward the British Columbian coast, whence the oil would depart toward Asia. The Asian Times reported in September that China has invested $16.8 billion in the Canadian energy sector since 2009.

"The Chinese have said 'Forget about being aggravated with the United States,' " Tom Faranda said last spring. " 'Build pipelines to the ocean, and we will buy every drop of oil you can put out.' Thank God Canadians like us a lot."

But if their neighbors to the south kill Keystone XL, Canadians may not blink an eye as they point the oil toward eager customers elsewhere.

As Canadian humorists Will and Ian Ferguson pointed out in their bestseller "How to Be a Canadian," Albertans have oil, money and guns. What they don't have is patience for nonsense.