Apple’s future will not fall far from the tree.

n the very same day in March, Texas announced a huge new Apple Inc. campus in Austin (notably without a quote from Apple), and Apple submitted revised plans for a new headquarters campus in its hometown of Cupertino, Calif., that would boast a Texas-sized capacity of 13,000 employees.

According to the results of the latest "Best and Worst States for Business" survey by Chief Executive magazine, released in May, Texas is first in the nation. California is last. But both sites are aiming to be built to last for Apple, as it looks toward new horizons even as the sun sets on the life of its late founder and technology icon Steve Jobs.

The $304-million Austin project aims to create 3,635 new jobs by 2025 at a new campus in North Austin, which appeared to have beat out Phoenix for the project. The state has offered Apple an incentive of $21 million over 10 years through the Texas Enterprise Fund (TEF), and other local incentives are on offer. However, as of June government officials were still awaiting final confirmation from Apple.

In California, the plan updates have continued to flow this spring from Apple to state environmental authorities and to the Cupertino City Council, whose chambers hosted Jobs in one of his last public appearances last summer.

"Apple's growing like a weed," he said then, explaining that his company's core buildings now hold 2,800, but that an area work force of 12,000 had required "renting buildings — and not very good buildings either — at an ever greater radius from our campus." The latest outgrowth for the company occurred in March 2012, when the nearby City of Sunnyvale announced that by the third quarter of this year, Apple would move approximately 400 employees into the entire 156,000-sq.-ft. (14,492-sq.-m.) second office building at the Sunnyvale Town Center redevelopment project, next door to a 500-person Nokia operation.

So, in addition to its existing campus in Cupertino, the company is planning to build Apple Campus 2, "an integrated, unified, and secure state-of-the-art office and research campus designed to serve as a model workplace for the 21st century." Foster + Partners are the architects for the new campus. The general contractor will be a joint venture of DPR Construction and Skanska USA Building Inc.

Apple Campus 2’s focal point is a 2.8-million-sq.-ft. (260,120-sq.-m.) ring-shaped main office building, which will consolidate 12,000 Apple employees together into one integrated workspace around an expansive courtyard.
Renderings courtesy of Apple Inc. and the City of Cupertino

A company spokesperson declined an interview request regarding the California and Texas projects. But thanks to transparent application requirements in California and Apple's own increasingly thorough transparency efforts, some meaningful details can be gleaned from documents alone.

Apple in April filed a 270-pp. application with the state for expedited permitting for "the Project" under California's new Jobs and Economic Improvement through Environmental Leadership Act, signed into law by Gov. Jerry Brown in Sept. 2011. Among the requirements of the act is that the project exceed $100 million in investment, a milestone Apple said it would "far exceed." Among the application's other highlights:

> "The Project will replace and rebuild 2.66 million sq. ft. [241,540 sq. m.] of existing aging office buildings and surface parking lots on a 176-acre [71-hectare] infill site with 3.3 million sq. ft. [36,570 sq. m.] of high-performance energy- and water-efficient buildings, below-grade and structured parking, and more than 115 acres [46 hectares] of landscaped green space, nearly three times as much as before." It's aiming for LEED-Silver certification.

> In addition to the Project's signature ring building, additional structures include ancillary research buildings (another 300,000 sq. ft. [27,870 sq. m.] for another 1,000 employees), a central plant, a 1,000-seat corporate auditorium, a corporate fitness center, and above- and below-grade parking. "These buildings will be integrated into the site's newly created and expanded green space, which will be landscaped with native vegetation and approximately 6,000 trees, including orchard trees reflecting the region's agricultural past" as an apricot orchard.

> "The Project will be entirely powered by renewable energy, which will primarily be generated on-site from fuel cells and more than 650,000 sq. ft. (60,385 sq. m.) of solar panels installed on building roofs, making the Project one of the largest corporate campus solar installations in the world." The project is likely to deploy fuel cells made by Sunnyvale-based Bloom Energy Servers, whose units are already destined for Apple's mega-data center in North Carolina.

> "The Project will also promote alternative transit through the provision of a comprehensive Transportation Demand Management (TDM) program, an on-site Apple Transit Center, employee shuttles, pedestrian- and bicycle-friendly design, and 300 on-site electric car charging stations with built-in capacity to expand. These features will place the Project at the forefront of an emerging low-carbon economy in California."

Ken Alex, a senior policy advisor to Gov. Brown and the director of the state's Office of Planning and Research, who used to head the state attorney general's energy task force, says via email that the AB 900 certification process precedes the Environmental Impact Report, "so it's still early in the review process. We are currently reviewing the energy and GHG provisions (the California Air Resources Board in particular), for compliance with the requirements of AB 900 on those issues. So far, the project seems to be doing well."

Asked for a decision timetable, Alex says, "We are aiming to have a decision by the end of August."

A recent New York Times piece on Apple's tax planning explored the company's Braeburn Capital subsidiary, conveniently based in Reno, Nev., where the state levies no corporate income tax and where Apple processes its profits. The article also called into question whether Apple was paying its fair share in California. But the company is still Cupertino's largest taxpayer, paying some $8 million in local property taxes. 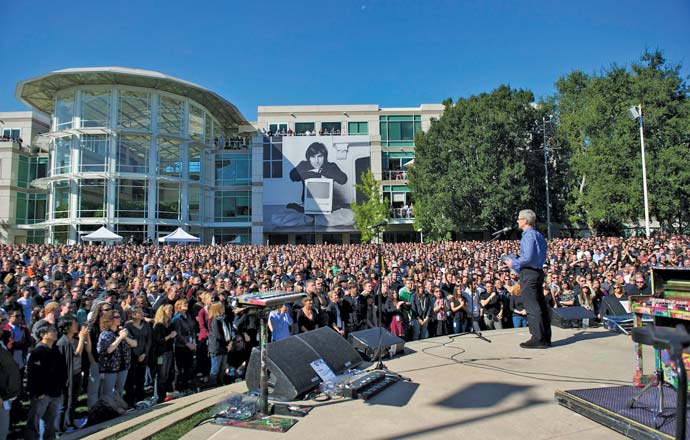 Apple has already been successful with the TDM program used at its nearby corporate headquarters campus at 1 Infinite Loop. The program has resulted in a rate of employee trips in single-occupancy vehicles of 72 percent in the morning peak hour and 68 percent in the evening peak hour, well below the average of 82.6 percent for other workplaces in Cupertino. Among the program's features:

> Coach shuttle service for Apple employees to and from multiple locations in the Bay Area;

> $20/month bike subsidy for bicycle commuters who do not use local transit;  bicycle racks, pumps, lockers, and showers available at the campus; and a bicycle sharing program;

> On-site services that reduce the need for midday errands.

The campus is ahead of its time in more ways than one. Senate Bill 375 requires that each metropolitan planning organization in the state prepare a Sustainable Communities Strategy (SCS) as part of a regional transportation plan (RTP). However, the Bay Area's SCS will not come into effect until 2013. The greenhouse gas (GHG) reduction target for the SCS requires a reduction of per-capita CO2 emissions from cars and light-duty trucks by 7 percent by 2020 and by 15 percent by 2035 (compared to a 2005 baseline).

"Not only is the Project consistent with these targets, it will serve as a model for how the Bay Area can achieve them," says Apple, citing its non-drive-alone commute rate of 30 percent or more and its provision for the 300 EV charging stations.

Apple estimates that construction alone will generate 22,967 person years of employment, which will translate into 9,187 full-time construction jobs over a 30- to 36-month construction period.

According to a supporting document filed by the DPR/Skanska JV, median hourly union wages associated with some of the job classifications most prevalent on the project site include $44.18 for a construction laborer, $78.48 for an electrician and $81.14 for a sheet metal worker. Cupertino's median household income from 2006 to 2010 was $120,201, nearly twice the figure for the state as a whole.

"As for permanent jobs, Apple is currently the second largest technology employer in Silicon Valley, with approximately 13,000 full-time employees based in Cupertino," says the application. "The Project will enable Apple to locate an additional 6,000 to 10,000 permanent employees in Cupertino by 2015. For every one new Apple job, an additional 1.5 jobs are created within Santa Clara County as a result of expenditures by Apple and by Apple employees."

Even as the state application makes its way forward, the company is seeking more than a dozen approvals and entitlements from the city, including right-of-way transfers, zoning amendments, and utility relocation and easement agreements. Apple anticipates commencing construction immediately after approval and expects construction to be completed by the fall of 2015.

And for those already wondering, there is a Phase 2: "Phase 2 includes programmatic approval of an additional 300,000 sq. ft. [27,870 sq. m.] of development capacity for up to 1,200 employees that could occur anywhere on the Apple Campus 2 property, providing limited flexibility to address future operational or business needs," says Apple.

The land Apple acquired has distinct ties to the teenage invention needs of founder Steve Jobs, as he related in his speech to the city council last summer.

"This land is kind of special to me," he said. "When I was 13, Hewlett and Packard were my idols, and I called up Bill Hewlett because he lived in Palo Alto and there were no unlisted phone numbers in the phone book ... He picked up the phone and I talked to him. I asked him if he'd give me some spare parts for something I was building called a frequency counter. He did, but he also gave me something more important, a summer job at Hewlett Packard, at the division that built frequency counters."

At the same time, HP bought property in Cupertino for their new computer systems building — the same property that Apple just bought from HP as the latter company has been shrinking its footprint.

Apple's aim is to enlarge its footprint at the same time it shrinks the carbon footprint of the site. Even with a 20-percent increase in building space, the company aims to go from roughly an 80/20 split between building/pavement and landscaping to its exact opposite.

"I think the overall feeling of the place is going to be a zillion times better than it is right now with all the asphalt," said Jobs. "We want to take the space and, in many cases, make it smaller."