For the third year in a row, the Golden State leads the field
in our annual index of sustainability. 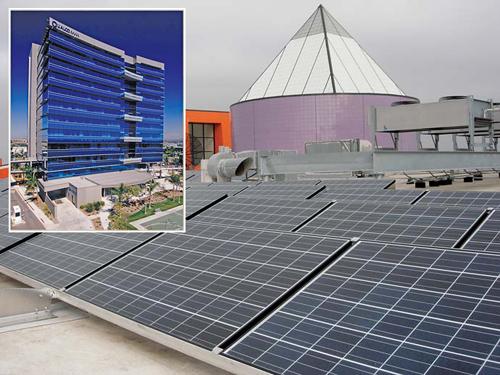 he 2012 Living Planet Report from World Wildlife Fund, which measures the health of more than 2,600 species, says that by 2030, if current practices continue, humanity will need two planets worth of resources to support the world's population. How territories and companies work together to manage resources and reduce their footprints while still remaining economically productive will determine whether that finding is prophetic or a catalyst for some very quick changes.

This spring, Business Roundtable, the national organization of CEOs from major U.S. companies, released "Create, Grow, Sustain," its own 2012 report on corporate sustainability featuring accounts of company progress from 126 of the organization's CEOs. Whether forced to by statute or driven to by strategy, many of them are pursuing sustainability projects that involve California, which for the third year in a row tops Site Selection's Sustainability Rankings.

Riley Bechtel, chairman and CEO of Bechtel, reported that the Ivanpah Solar Electric Generating System and the California Valley Solar Ranch the company is building in the state will not only produce enough solar power for 240,000 homes, but are employing more than 1,400 construction workers.

Theodore Craver, Jr., chairman, president and CEO of Edison International, parent company of Southern California Edison (SCe) and Edison Mission Group (eMG) wrote that the company's new smart-grid system "will be designed to not only support traditional power generation, but also interconnect with intermittent renewables. We are investing approximately $1 billion a year to upgrade our transmission grid; this will help California meet its 33 percent Renewables Portfolio Standard by 2020. In 2011, SCE delivered 15.54 billion kilowatt hours of renewable electricity to our customers, equal to 21.1 percent of our power portfolio. In addition, EMG is the sixth-largest wind developer in the country, operating a portfolio of 31 projects with a generating capacity of nearly 2,000 megawatts."

By the end of 2012, said Craver, the company will have completed the installation of 5 million smart meters. "The $1.6 billion edison SmartConnnect program will provide customers with new tools to better understand and manage their electricity use." The company's Plug-in Readiness program, meanwhile, will help customers who choose electric cars prepare their homes for fueling with electricity and informing them about their EV rate plan options.

The list goes on: UPS Chairman and CEO Scott Davis discussed the deployment of alternative-fuel and electric vehicles around the world, including leading sustainable nations such as Brazil, Canada and the U.K., and the Golden State, where UPS is using 100 plug-in EVs and also testing long-haul trucks fueled by liquid natural gas. Greg Swienton, chairman and CEO of Ryder, said his company is pursuing a similar truck deployment in Southern California. And John Watson, chairman and CEO of Chevron, wrote of one innovation that some carbon footprint observers might call a wash: "In California, we are developing and demonstrating solar technology that will produce steam needed for production operations at our Coalinga oil field."

Part of the Business

Site Selection's Sustainability Rankings seek to balance sustainability objectives as measured by such factors as LEED-certified buildings and renewable energy use with such complementary factors as "green industry" facility projects as measured by the Conway Data New Plant Database and brownfield funding figures from the EPA. (See other criteria below each rankings list.)

In highly ranked Vermont, a $15-million partnership involving the state, the University of Vermont, the U.S. Department of Energy's Sandia National Laboratories in New Mexico and various utilities is resulting in a new Center for Energy Transformation and Innovation. In Pennsylvania in February, Aquion Energy announced a 400-job manufacturing plant for a new sodium-ion, aqueous electrolyte battery that will provide flexible, emissions-free capacity. And in Eden Prairie, Minn., in May, GE Capital Fleet Services announced the opening of its Vehicle Innovation Center for alternative fuel vehicles.

But California and its cities again lead the way.

Paul Jacobs is chairman and CEO of telecommunications and IT pioneer Qualcomm, based in San Diego, which ranks 7th among this year's Top Sustainable Metro Areas. In the Business Roundtable report, he wrote that Qualcomm's smart energy efforts run the gamut, from product partnerships for home energy management and EV charging stations to lowering data center carbon footprints.

Among other accomplishments, Qualcomm's energy efficiency efforts to date have saved 26.6 million kilowatt hours of electricity annually and prevented approximately 8,740 metric tons of GHG emissions per year. In 2011, Qualcomm was awarded Recycler of the Year by the San Diego environmental Service Department. The company recycled more than 1,049 tons of waste and 243 tons of electronic waste worldwide in 2011. Its buildings have earned LEED-Gold certification. And while its support of the community's EvoNexus high-tech start-up incubator applies across all business ideas, sustainability and green technologies for portable devices is one of four focus areas receiving special attention. 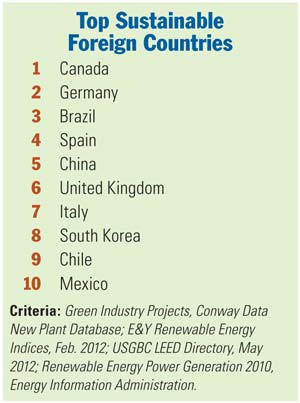 But the most compelling best practice for corporate real estate professionals — and best model for public policy coalescing with corporate behavior — may be this one:

"After receiving the designation of Climate Action Leader for eight consecutive years by the California Climate Action Registry," wrote Jacobs, "we began tracking greenhouse gas (GhG) emissions in 2011 for all of our facilities in North America."

Altec Industries, the Alabama-based maker of utility service vehicles, earlier this year opened new offices and a manufacturing facility in Dixon, Calif., in Solano County, where the company has operated since 1988. The 42,400-sq.-ft. (3,940-sq.-m.) facility exceeds the state's Title 24 energy and lighting codes, and will be used to expand the development and production of Altec's Green Fleet utility vehicle product line. Altec is creating about 100 new jobs at the outset.

David Payne, facility manager for Altec, says green policies are not holding back business, but sustaining and growing it, as they drive expansion of renewable industries and related new jobs to support wind, solar, and geo-thermal technologies. At a micro, local level, he says, green is driving Altec Green Fleet marketing and product development related to the JEMS operating system. "Support for this product is spreading beyond California to a national market and across borders into Canada," he says, citing Site Selection's Top Sustainable Foreign Nation for this year. "Today it is a staple menu option on GSA and other Government contracts." 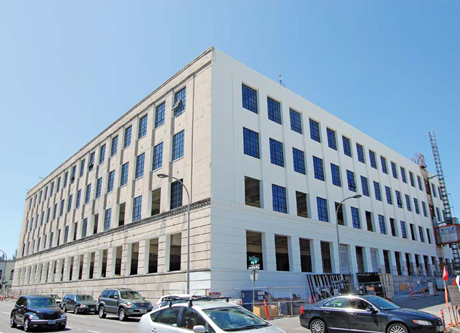 Oregon’s green credentials are boosted by doubly sustainable projects like the infill redevelopment of this historical Portland building by Vestas for its North American HQ.
Photo courtesy of Vestas

Altec received significant guidance and support on the development of the new green-focused facility from two of its customers — Pacific Gas & Electric Company (PG&E) and Southern California Edison. In addition, PG&E and Altec are partnering to develop the Green Fleet utility vehicles which will be produced at the Dixon facility.

Lee Styslinger III, Altec's chairman and CEO, said at the facility's grand opening that the company's commitment to sustainability is reflected "not only in the products we build, but also in the facilities where we build them ... Altec is also committed to helping rebuild a strong manufacturing base in the U.S., and our new green-focused facility in California is a reflection of that commitment." 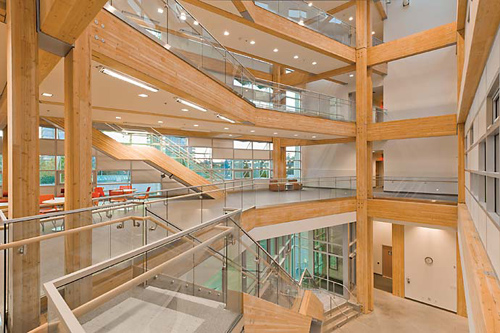 On November 3rd, 2011, the University of British Columbia opened the Centre for Interactive Research on Sustainability, which it calls “the most sustainable building in North America.” - Photos by Martin Dee courtesy of UBC
T

The school's $37-million Centre for Interactive Research on Sustainability (CIRS) is one of only a handful of buildings worldwide that will provide "net positive" benefits to the environment. It reduces UBC's carbon emissions, powers itself and a neighboring building with renewable and waste energy, creates drinking water from rain and treats wastewater on site. CIRS will be an international center for research, partnership and action on sustainability issues, including green building design and operations, environmental policy and community engagement. CIRS cost 25 per cent more than an equivalent LEED Gold building, which is standard at UBC. The university is projected to recoup the extra cost in 25 years or less through reduced operation, maintenance and energy costs, and reap significant cost savings over the building's projected 100-year lifespan.

"With the world's urban population projected to jump by 2 billion people in 20 years, universities have a crucial role to play in accelerating solutions for the sustainability challenges facing society," said UBC President Stephen Toope at the facility's opening. Partners have committed more than $23 million in support for CIRS, including the federal government ($8.4 million), the provincial government ($5.7 million), BC Hydro ($5 million), and Modern Green Development, China's largest green real estate developer ($3.5 million). CIRS also has strategic partnerships with corporations such as Haworth, for adaptable workspaces, and Honeywell, for building controls and automation.

Modern Green Development offers a window into the up-and-coming (some would say already arrived) sustainability efforts in China. The Beijing-based company has developed more than 10 million sq. ft. (929,000 sq. m.) of green buildings in China, and has overall green development targets of 6 million sq. ft. (557,400 sq. m.) per year.