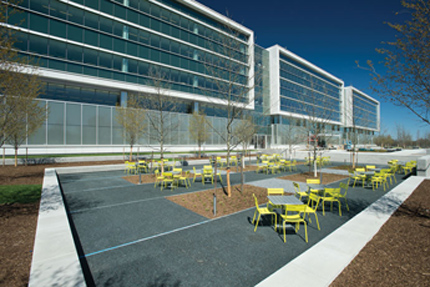 BASF hopes to achieve LEED-Double Platinum certification for its new headquarters building. The patio in the building’s rear was built with a porous pavement system which prevents storm water runoff, allows water to return to natural aquifers and can filter as much as 4,000 liters of water per hour.
Photo courtesy of BASF
B

ASF's new headquarters in Florham Park, N.J., just west of Newark, was built as a model for sustainability. The company formally opened the 325,000-sq.-ft. (30,192-sq.-m.) building in early May. It was developed in partnership with the Rockefeller Group Development Corp., and is designed to achieve LEED-Double Platinum certification.

The building includes many BASF construction products, and the company says it is one of the state's largest sustainable buildings.

"The new headquarters building exemplifies BASF's values as a company," says Fried Muenstermann, executive vice president and CFO for BASF Corp. "It is designed to empower our team to collaborate, innovate and communicate even more effectively — keys to our corporate culture and values. It offers employees a host of amenities that create a comfortable and productive work environment."

BASF will employ 1,400 at its new headquarters. The company has been based in Florham Park since 2004.

"We have enjoyed being a part of the community and are committed to staying here," Muenstermann says. "The proximity to major highways and airports makes it convenient for our employees to commute and conduct business travel. We did not want to significantly alter the commutes of the majority of our employees, so staying in Florham Park was the best option."

"If we succeed in achieving LEED certification — and we're confident we will — our North American headquarters will be the largest LEED-Double Platinum office building in New Jersey, and one of the largest in the nation," Muenstermann says.

BASF's new headquarters is oriented with its longest axis from east to west to minimize exposure from the sun while optimizing daylighting opportunities. Vertical stone fins on east and west elevations away from the glass mitigate east/west sun exposure, and horizontal louvers are provided above the glass on the south elevation to mitigate southerly sun exposure.

Logistics facilities and solar rooftops both are seemingly ubiquitous in New Jersey. The state is second in the nation in solar energy generation, according to the Solar Energy Industries Association, and a major reason is that so much of that generation sits atop a growing number of the state's large distribution facilities.

The largest to date is a US$42-million project on the roof of Gloucester Marine Terminal, a mammoth refrigerated produce distribution center in Gloucester City operated by Holt Logistics. Known as Riverside Renewable Energy, LLC, the project consists of 27,526 photovoltaic rooftop solar panels covering 1.1 million sq. ft. (92,900 sq. m.). It has the capacity to produce 9.0 MW of electricity — enough to power more than 1,500 homes. 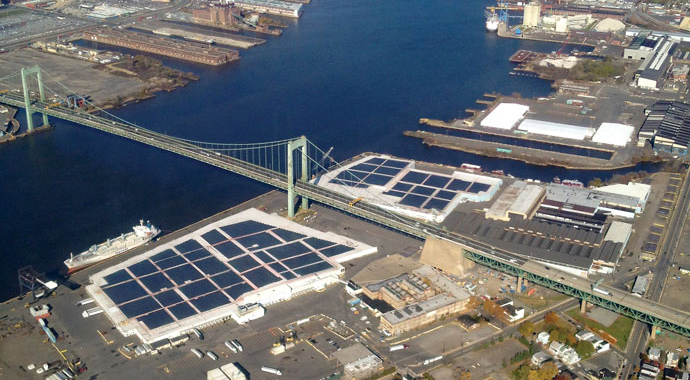 The Riverside project sits atop the roof of the terminal's refrigerated warehouse near the Walt Whitman Bridge on the Delaware River. Operating around the clock to service food importers, the terminal is the largest on-dock refrigerated warehouse on the East Coast and a large user of electricity. Riverside will generate the equivalent of up to 80 percent of the Terminal's power demand.

Enfinity America recently completed a 1.1-MW solar array on the rooftop of a Macy's distribution center in Edison, about 20 miles (32 km.) southwest of Newark.

"This installation for Macy's is a good example of what the future of solar PV will look like — more roof-mounted, distributed generation plants located near areas of higher electricity demand," said Rafael Dobrzynski, Enfinity's CEO. "It's also a good example of how it takes robust, experienced companies, such as the team on this project, to work together through a highly complex process to deliver a successful installation. The post-1603 solar market demands a high degree of development experience and ready access to financing."

The federal 1603 Renewable Energy Treasury Grants program provided grants in lieu of tax credits for solar energy projects. It expired at the end of 2011, and efforts to revive it in Congress fell short earlier this year. An April report from the National Renewable Energy Laboratory said the program, part of the federal Recovery Act, provided approximately $9 billion in funds to over 23,000 PV and large wind projects, comprising 13.5 GW of electric generating capacity.

Through a 20-year power purchase agreement Enfinity owns the solar energy plant and will sell the electricity generated to Macy's at a fixed rate. "This project represents the 42nd rooftop solar installation on our company's facilities across the country, and among our largest to date," said Bill Lyon, Macy's vice president for energy management.

Home furnishings retailer IKEA also is heavily into rooftop solar. It will add to its portfolio with the installation of 15,600 solar panels on the rooftop of its distribution center in Westampton.

A life sciences company best known for a different kind of sustainability plans a multi-phase project in Bridgewater that may eventually employ nearly 600. Allergan makes products to treat a variety of afflictions, but is perhaps best known for Botox. The company is establishing its East Coast R&D base in the Somerset Corporate Center.

The company, which is investing $12 million in the project, already has an office in nearby Bedminster which employs about 20. Allergan was awarded a $14.9-million grant from the New Jersey Economic Development Authority through the Business Employment Incentive Program.

"This expansion will enable us to further tap into the talent of New Jersey residents," says Cathy Taylor, Allergan's director of global corporate affairs and public relations. "As a multi-specialty healthcare company, a critical component to our business is the scientific innovation derived from the work of our R&D facilities throughout the United States. The expansion of our facility in New Jersey will enable us to further enhance our product pipeline and advance our pursuit of novel medical therapies for patients."

The 92,725-sq.-ft. (8,614-sq.-m.) project will be developed in three phases beginning in August and continuing through August 2014, says Howard Turbowitz, economic development officer for the Township of Bridgewater. Turbowitz says Bridgewater, with a population of 46,000, is home to more than 20 pharmaceutical companies.

Another major life sciences project coming to Bridgewater is from Lifecell Corp., a developer of tissue repair products, which is based in Branchburg, about 10 miles (16 km.) away. Turbowitz says Lifecell plans to move in phases to 120,000 sq. ft. (11,148 sq. m.) of space and eventually employ more than 500 people. 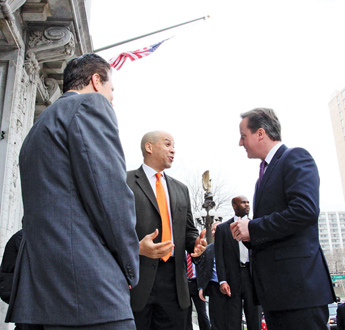 In Newark, the big news last year was Panasonic's announcement that it would move its headquarters from Secaucus to a new office tower in Newark (see the July 2011 issue of Site Selection). Newark Mayor Cory Booker recently responded to questions about the city's economic development efforts submitted by Site Selection.

"Panasonic is one piece of a giant development wave in Newark — a huge, game-changing piece, the first new office tower to be built in Newark in 20 years," Booker says. "Last year Newark had over $700 million worth of projects that either broke ground or were under construction, and now we have over $1 billion worth of projects moving forward in the pipeline. All this in the middle of the biggest economic downturn of my lifetime. Look out for the momentum to continue with more projects and office towers on their way to Newark."

Newark has been working to enhance its international economic ties. Booker recently met with U.K. Prime Minister David Cameron in Newark and hopes that will lead to increased international exposure for the city. The city also recently participated in a trade mission with Portugal.

Newark's relationship with Portugal goes back generations, and the trade mission makes that stronger," Booker says. "Newark and Portugal have a blood bond and a connection through commerce. The Ironbound, the epicenter of Newark's Portuguese community, is alive with business and activity. Newark's universities, like NJIT and Rutgers, have partnered with Portuguese companies through their business incubator."