he 2012 edition of the annual "Kauffman Index of Entrepreneurial Activity," published by the Ewing Marion Kauffman Foundation, found that entrepreneurial activity rates decreased in all U.S. regions in 2011 except the Northeast, which experienced a slight increase. Rates remain highest in the West and lowest in the Midwest.

Full Speed Ahead in Halifax 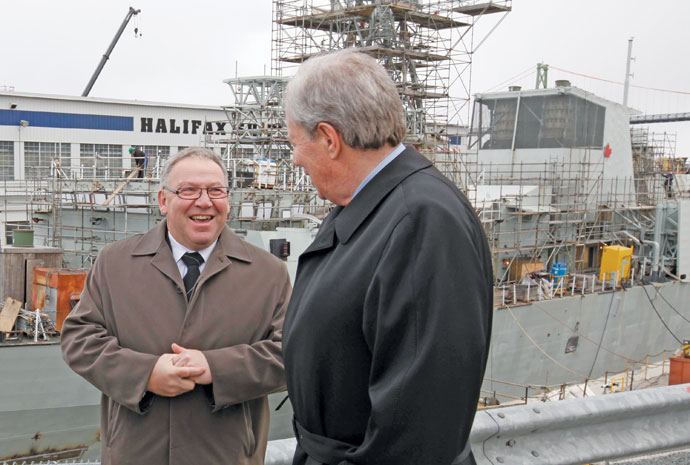 his spring, Nova Scotia committed up to $304 million in loans as part of Irving Shipbuilding’s successful bid for the $25-billion federal combat vessel shipbuilding program. It is the single largest investment in jobs and growing the economy in Nova Scotia’s history, and represents six percent of the tax revenue the province expects to receive in return. The impact of the shipbuilding work is estimated to result in $2.8 billion in additional revenue to the province over the next 19 years.

“The province has consistently shown its commitment to the skilled men and women at Irving Shipbuilding,” said Jim Irving, CEO of Irving Shipbuilding. “During the past 15 years, Nova Scotia’s confidence in our capabilities made us a contender, earning the highest score and the right to build Canada’s next generation of combat vessels. We would not have won without Nova Scotia’s support.”

Irving will contribute $250,000 per year over the next 30 years to support the Irving Shipbuilding Centre of Excellence at Nova Scotia Community College.

The shipbuilding contracts are expected to create an additional 11,500 jobs for Nova Scotians and will increase the province’s GDP by almost $900 million during peak production. Canada’s economy is expected to grow by $1.5 billion, and 4,500 jobs will be created outside of Nova Scotia. The Jacksonville Port Authority (JAXPORT), Mitsui O.S.K. Lines and TraPac announced June 19 that Walt Disney Parks and Resorts has started importing most of the merchandise headed to its Central Florida parks through JAXPORT, offering distinct evidence of spinoff economic development stoked by tourism.
I

n 2011 international visitors spent a record-breaking $152.7 billion on U.S. travel and tourism-related goods and services, an increase of 13.6 percent over 2010, according to the U.S. Dept. of Commerce. Spending through April 2012 indicated another possible record on the horizon, as 65.4 million foreign travelers are projected to visit the U.S. in 2012. n award-winning startup with an attention-getting name and an industrial stalwart in the "air movement industry" since 1889 announced major manufacturing expansions in Kentucky within 24 hours of each other in May.

On May 29, Lexington-based Big Ass Fans announced it would expand with a 72,000-sq.-ft. (6,690-sq.-m.) new building that would come with an $8-million investment and create 150 jobs, prompting government officials to welcome the project while, presumably, not smiling any more than usual.

"I'm delighted to see this expansion and witness the tremendous success of Big Ass Fans, a Kentucky-based company," Gov. Steve Beshear said. "We're proud to be home to Big Ass Fans," said Lexington Mayor Jim Gray. "Big Ass Fans has really put Lexington on the map," said Rep. Susan Westron of Lexington, "because of its name and certainly because of its quality work."

Founded in 1999, the HVLS (High Volume Low Speed) Fan Company changed its name to Big Ass Fans in 2002 and has become a leading manufacturer of ceiling fans for industrial, agricultural, commercial and residential customers. More than 65,000 Big Ass Fans are installed worldwide.

"While our name may be funny, we take our business seriously," said Carey Smith, president of Big Ass Fans, who called the company's work force one of its biggest ... wait for it ... assets. Kentucky Economic Development Finance Authority (KEDFA) preliminarily approved the company for tax incentives up to $2 million through the Kentucky Business Investment (KBI) program.

On May 30, New York Blower Co. announced it would locate a new manufacturing plant in the Grayson County town of Leitchfield, located in the middle of the triangle created by Louisville, Owensboro and Bowling Green. The project will create 125 new jobs with an investment of $4.8 million in a facility once occupied by Trim Masters. Founded 110 years before Big Ass Fans, New York Blower makes premium-quality, engineered fans and blowers for the industrial marketplace. This project was approved by KEDFA for up to $4.8 million (i.e. the total investment) in KBI incentives.

Despite its name, the company's main plant was originally in Bucyrus, Ohio, before being relocated to La Porte, Ind., in 1919. Its only other plant is a facility opened by its Mechanovent subsidiary in 2001 in the downstate Illinois community of Effingham.

For the second year in a row, the Washington, D.C., metro area ranked as the strongest local economy in the United States in POLICOM's annual economic strength rankings. The Palm City, Fla.-based real estate and economy analysis firm annually ranks the 366 MSAs and 576 Micropolitan areas in the United States based on 23 different economic factors over a 20-year period. Data stretching from 1991 to 2010 was used for this study.

The Huntsville, AL MSA improved significantly, jumping from 52nd to 16th place as a result of rapid growth in high-wage professional and scientific services, said POLICOM. The area's also getting a boost from manufacturing, as Toyota announced on May 17 it would invest $80 million in order to expand V6 engine production at its Huntsville engine plant, which has now received total investment of more than $700 million since opening in 2001.

A new U.S. Chamber of Commerce report, "Enterprising States," named its top 10 future "boom states" best positioned to grow, create jobs, and prosper in the coming years. That list, based on a weighted, normalized index of 12 measures including job growth trends, in-migration, education level, export intensity and cost of living, also appears below.