More Than a Hobby

Growing a corporate presence means tapping into a culture in Oklahoma. 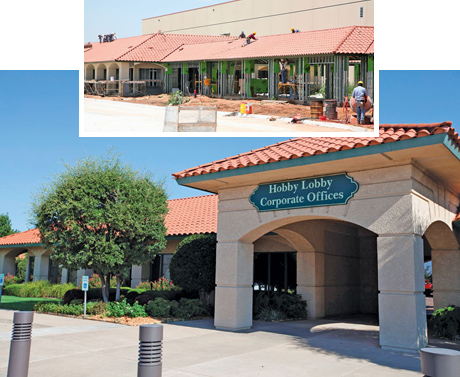 he model that Hobby Lobby has used successfully for many years in retail site selection is now being employed at its corporate headquarters in Oklahoma City.

"When shopping for real estate, our approach typically is to find a bargain on existing space and then go from there," says Mandi Broadfoot, Hobby Lobby spokeswoman. "It takes less time and money than to build from the ground up."

Taking advantage of good timing in the real estate market, Hobby Lobby is adding some 1.6 million sq. ft. (148,640 sq. m.) to its 4.2-million-sq.-ft. (390,180-sq.-m.) corporate campus in Oklahoma City. Through a combination of vacant warehouse purchases and new construction, the highly successful retailer is significantly expanding its footprint in Oklahoma's capital city and laying the foundation for sustained growth for years to come.

"Oklahoma City is a great location for business growth. It is great for families and individuals," says Broadfoot. "Oklahoma is a wonderful state. It is very attractive for businesses. This is one of the top states in the nation for job creation, and we have a lot of great employees here. You have to look at market conditions, and we have decided that now is the time to expand our corporate headquarters right here in Oklahoma City."

About half of the new warehouse space is coming through renovations of existing facilities the company acquired in 2011. The remainder of the new space, still under construction, is slated for completion by the end of this summer.

Between its headquarters, warehouse operations and retail outlets, Hobby Lobby employs more than 2,500 workers in the Oklahoma City area.

A Philosophy Built on Giving

For Hobby Lobby, growing the company's presence in Oklahoma has been synonymous with cultivating a corporate culture that is right at home in the Sooner State.

Widely known as one of the most philanthropic companies in America, Hobby Lobby is generous to its employees as well. The minimum full-time hourly wage, companywide, is $13. Part-time workers start at $9 an hour.

"This is one reason that our customer experience at our stores is so strong," says Broadfoot. "Our minimum wage increases over the years have attracted very dedicated employees. We are committed to giving them raises as the opportunity arises."

Company founder David Green, who opened his first Hobby Lobby in 1972 in a 300-sq.-ft. (28-sq.-m.) space in Oklahoma City, has been equally generous with communities and educational institutions. Liberty University in Lynchburg, Va., and Oral Roberts University in Tulsa, Okla., are two of the schools that have received large gifts from Green.

A company that adheres to faith-based values, Hobby Lobby is open just 66 hours a week and is closed on Sundays.

The firm's operations in Oklahoma are diverse. "We have several entities within our corporate headquarters," Broadfoot notes. "We have a manufacturing department, a candle maker and our own packaging line right here."

The growth is not likely to slow anytime soon, she adds. "We have already opened 22 new stores across the U.S. this year, and we continue to look at new store opportunities around the country. Right now, we are expanding in California, Maryland, North Carolina and Washington."

Hobby Lobby is not alone in Oklahoma. In the capital city and other markets around the state, a number of firms are substantially expanding. In Tulsa, energy firm QEP Resources is bringing more than 50 new jobs to the region. The expansion will include new office space as well, as the company will occupy three floors at One Warren Place.

"QEP Resources is committed to becoming an employer of choice in Tulsa," said Jeff Tommerup, Southern Region vice president for QEP Energy. "Currently, we source more than half of our natural gas production from the company's Southern Region properties, positioning Tulsa as a strategically important center of operations for our organization. We look forward to partnering with the citizens and community of Tulsa as QEP Resources continues to grow its presence in Tulsa."

Tulsa Metro Chamber President and CEO Mike Neal added that "Northeast Oklahoma continues to outpace the nation in many areas of economic development and job creation, and our strong legacy of energy sector employees is bolstering that growth. We know that QEP will continue to thrive in the Tulsa region, and we look forward to continued success from this leading energy company."

Tommerup, in an email interview with Site Selection, said there were several reasons for the Tulsa location decision.

"Tulsa is located in close proximity to major resource fields in Oklahoma, Texas and Louisiana," he said. "Tulsa also is an outstanding place to live and work. We appreciate the community atmosphere, as well as the business-friendly climate that encourages investment in the region. Tulsa was a natural area of expansion for our Southern Region operations, given our existing presence in the area."

From Google to Power Lines

In the Mid-America Industrial Park in Pryor Creek, Okla., the biggest news of the year was Google's recent announcement of a second pod data center.

The expansion will bring to $700 million Google's total investment into the campus and will take its work force there to 150 employees.

Don Berger, marketing director for Mid-America Industrial Park, says the announcement is a boon for the area. "Industry-wide and park-wide, our companies have been doing pretty well here," he says. "We have shown a 500-employee increase in the past year — about a 12 to 13 percent increase in employment — in the park."

In other parts of the state, energy and life science employers continue to expand. In Oklahoma City, the Oklahoma Medical Research Foundation is growing its cancer and Alzheimer's research centers, while energy firm Continental Resources is doubling in size after relocating its corporate headquarters to the capital city.

In Durant, PharmCare has started construction on a new industrial facility of more than 50 workers who will package pharmaceutical orders for industrial use, while the Choctaw Nation has just completed a $400-million casino hotel and resort employing 1,500 workers.

Adding to the employment outlook around Durant is a new $190-million electric transmission line from OG&E stretching from north of Ardmore over to Hugo, Okla.

"We are not recession proof, but we have not felt the recession like the rest of the country," says Tommy Kramer, head of economic development for Durant and Bryan County. "We are seeing construction continue, and we are getting a lot of inquiries every week for manufacturing facilities and distribution. From an economic development standpoint, we are extremely healthy right now."