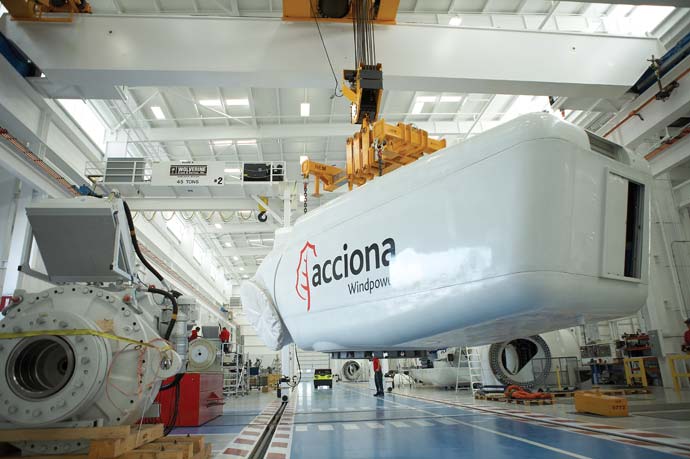 Above: Acciona’s wind turbine plant in West Branch, Iowa, will turn its attention to Canadian projects in 2013.
Photo courtesy of Acciona
by JOHN W. McCURRY
A

cciona, a Spanish energy specialist, opened its first North American facility in the heart of U.S. wind country in West Branch, Iowa, in December 2007 with the plan of providing turbines to wind farms in North America, primarily those operated by Acciona Energy. As the second half of 2012 begins, the Iowa plant is finishing up an order for 126 turbines for a wind farm in Montana, but future contracts for U.S. projects are in doubt. That's because the future of the federal Production Tax Credit (PTC) for energy producers remains in doubt.

Joe Baker, CEO of Acciona Windpower North America, says the plant has turned its attention to customers in Canada, Mexico and beyond to fill the gap. The federal tax credit provides 2.2 cents per kilowatt-hour for power from wind facilities in service before the end of 2012. The 220,000-sq.-ft. (20,438-sq.-m.) plant in Iowa, which employs slightly more than 100, currently is operating at 60-percent capacity, he says.

"We are building the project in Montana for a company that has a PTC and has got to have it in by the end of the year," Baker says. "After that, we will slow down some and ramp up for Canadian business."

Baker, like many wind energy supply chain executives, believes the PTC will be renewed, but probably not for as many years as the industry would like.

"We are likely to get an extension in the lame-duck session of Congress after the election," he says. "It's my opinion we will get a two-year deal. We would like four, but we are not in the driver's seat on this particular piece of it." 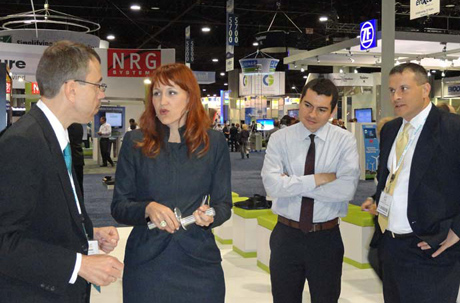 Heather Zichal, deputy assistant to the President for energy and climate change, speaks with Siemens Wind Power officials at the Windpower Expo in Atlanta in June. She says U.S. wind energy supply chain factories will come to a standstill if Congress doesn’t act on the PTC extension.
Photo by John W. McCurry

What is crucial, Baker and others say, is how the PTC is ramped down over a period of time. He says there is not much consensus on that issue. In the meantime, in order to keep the plant running, Baker says Acciona has turned its attention to business outside the U.S. "We have a good backlog supplying projects in Canada and Mexico and Brazil," Baker says.

Baker, who was among a group of industry executives who recently met with Obama Administration officials in the White House to discuss the PTC issue, believes the future of wind energy component manufacturing in the U.S. will be situational, especially if there is no PTC.

"If somebody is not already here, they will be reluctant to invest a significant amount without the PTC," Baker says. "I don't see a lot of new investment if there is any kind of uncertainty in the market."

Germany-based Nordex began production of nacelles in Jonesboro, Ark., in 2010 with the hope of eventually employing 700. That number currently stands at about 100. Ralf Sigrist, president and CEO of Nordex USA, says wind energy developers have driven down the cost of wind energy by 50 percent over the last three years with a combination of more efficient turbines, longer blades and improved costing. He says the PTC extension is needed to give the industry time to drive costs down further. 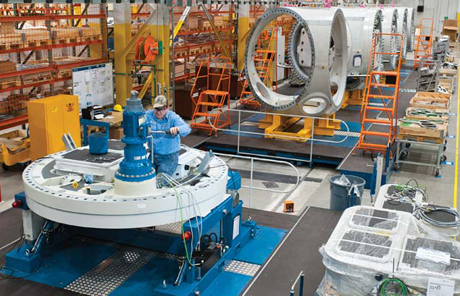 Nordex, a German wind turbine builder that opened a plant in Jonesboro, Ark., in 2010, is seeking business in Central and South America to keep the plant running until U.S. orders pick up.
Photo courtesy of Nordex

"So many U.S. developers have slowed down activity," says Sigrist. "The uncertainty of the PTC is keeping everything on hold because you don't really know. It's very difficult for anyone from the off-taker to the investor to make an investment decision for 2013 without knowing what will be in place."

Sigrist would prefer a PTC extension of three to seven years to instill reliability in the market. He says very few U.S. wind turbine builders are running at capacity in 2012, and the current outlook for 2013 is grim.

"The expectation is the market could drop by as much as 80 percent for next year," Sigrist says. "That is going from 10 to 11 GW to two GW. Our full capacity would mean 300 units. At the moment we operate at one-third of that capacity. That's the case for the entire wind industry supply chain."

Sigrist says Nordex hopes it can avoid layoffs in Arkansas. About two years ago the company took a look southward in order to diversify its market. It is pursuing projects for 2013 in Central and South America with hopes of getting the necessary volume to avoid layoffs.

The PTC issue was the overriding talking point at the American Wind Energy Association's Windpower Expo held in Atlanta June 3-6. AWEA has released a study that claims the industry might lose half of its 75,000 U.S. jobs in 2013 if the PTC goes away. About 30,000 of the industry's total jobs are in manufacturing, with 500 facilities being developed over the past five years. The trade group says extension of the PTC has significant bi-partisan support.

Governors Mike Beebe of Arkansas and Sam Brownback of Kansas, who have seen several wind manufacturing projects land in their respective states in recent years, spoke during the show's opening session to demonstrate bipartisan support of extending the PTC. Both later discussed the wind industry's impact with Site Selection.

"The feedback we get is that the uncertainty has impeded projects," says Arkansas Gov. Beebe, a two-term Democrat. "It's not yet affecting our ability to recruit companies. We are still in discussions with potential wind energy concerns including component manufacturers or wind farms."

Beebe acknowledges that he is passionate about the wind industry, which he says has not only benefited Arkansas in terms of manufacturing jobs, but also in construction jobs and in enhancing the state's reputation globally.

"We've been able to attract manufacturing from overseas and we have three companies in the wind energy business. It's put us on the map with other industries too. These companies work with each other whether they are in the same business or not."

Beebe would like to see a four- or five-year extension of the PTC. 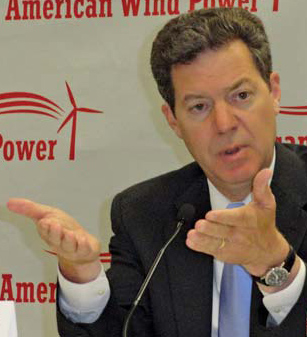 "When people are making hundreds of millions in investment in new plants and equipment, they need some degree of stability and security for their future. When they spend this kind of money on the front end to build major plants, they should have some reasonable degree of insurance. If it's passed, we have demonstrated we can train up a work force in that field. Companies seem to be happy with it."

Brownback, a Republican serving his first term as governor following 14 years in the U.S. Senate, says the wind sector is booming in Kansas, but that could change abruptly in 2013. The looming expiration of the PTC has accelerated wind farm development this year, he says.

"To date, it has actually had a positive impact in the sense that it has pushed people to do projects in 2012," Brownback says. "Wind generators are going up lickety-split. We have $3 billion in new investments this year, all trying to get wind turbines turning by the end of the year. The problem is next year. I don't know of any project that people are looking at. It's going to be a great 2012, but we are going over the cliff in 2013 for both manufacturers and wind developers."

Brownback cites BP's $800 million investment in a wind farm in south central Kansas as an example of the state's current wind boom.

"The BP project is enormous. It's going to come in this year just under 500 MW and has the capacity to nearly double the size of that, and I think it would, if the PTC is extended."

Brownback has pushed for a PTC extension with a four-year phase-out. He says the industry is becoming more efficient and a phase-out is a prudent approach.

"A phase-out keeps the industry building, yet reduces the cost on the federal government," he says. "Unless you spend the money to get that project up and going, you don't get the PTC. It doesn't pick a winning group or a losing group. If you put the wind generator in, you claim it, you take the risk."

Brownback says the limbo status of the PTC has caused manufacturers to put projects on the back burner, but activity would absolutely pick back up if it is renewed.

"The interest level is down, but it's not moving away. If you have a four-year phase-out, the projects will start coming. Really, by that point in time, if the industry continues to improve, you should see a viable industry that can operate without a PTC."

In the meantime, Kansas continues its recruitment of wind turbine builders. Brownback says the state plans a trade mission to Europe this summer to talk to manufacturers there about considering sites in Kansas.

The state's capacity to offer power from renewable energy is also a recruiting tool, Brownback says. He cites Mars Chocolate, which is building a plant in Topeka. The fact that Kansas can offer wind power was viewed as a major positive for Mars, which has a corporate culture that embraces renewable energy.

"It's a great recruiting tool, and we use it," Brownback says. "I've brought it up with several big recruits that we have. It's not the thing that seals the deal, but it certainly perks the interest. We use this to our advantage, and we get a second look just because of this issue."