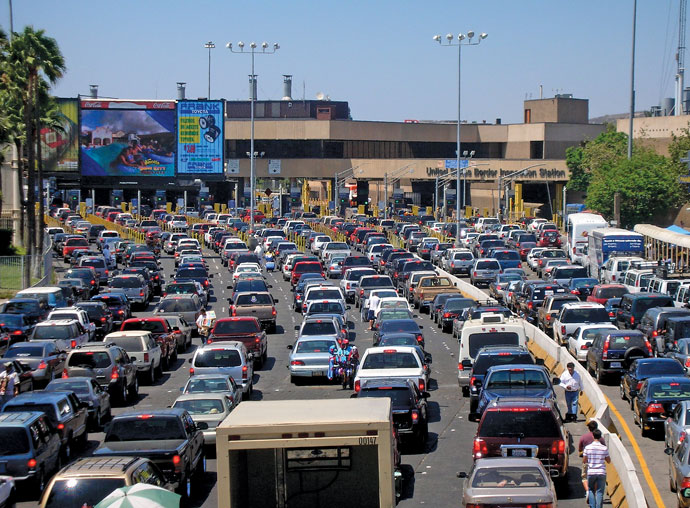 Cars wait in line at the San Ysidro Port of Entry between Tijuana and San Diego. A project to expand the number of lanes is under way.
Photo by Matt H. Wade
by CHRISTOPHER E. WILSON & ERIK LEE
C 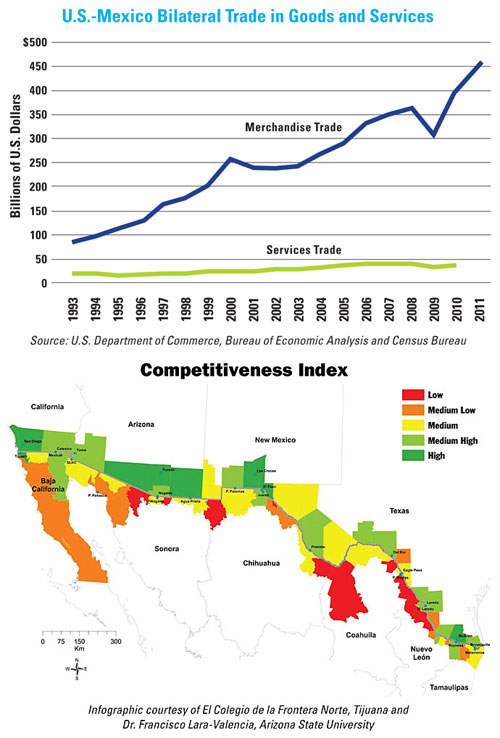 ommerce between the United States and Mexico is one of the great — yet underappreciated — success stories of the global economy. In 2011 U.S.-Mexico goods and services trade reached the major milestone of one-half trillion dollars with virtually no recognition. The United States is Mexico's top trading partner, and Mexico — which has gained macroeconomic stability and expanded its middle class over the last two decades — is the United States' second largest export market and third largest trading partner.

Seventy percent of bilateral commerce crosses the border via trucks, meaning the border region is literally where "the rubber hits the road" for bilateral relations. This also means that not only California and Baja California, but also Michigan and Michoacán, all have a major stake in efficient and secure border management.

The quantity of U.S.-Mexico trade is impressive, but its quality makes it unique. The United States and Mexico do not just sell goods to one another, they actually work together to manufacture them. Through production sharing, materials and parts often cross back and forth between factories on each side of the border as a final product is made and assembled. As a result, U.S. imports from Mexico contain, on average, 40 percent U.S. content, and Mexico's imports from the U.S. also have a high level of Mexican content.

This system of joint production has two important consequences. First, it means that our economies are profoundly linked. We tend to experience growth and recession together, and productivity gains or losses on one side of the border generally cause a corresponding gain or loss in competitiveness on the other side as well. Second, the fact that goods often cross the border several times as they are being produced creates a multiplier effect for gains and losses in border efficiency. Whereas goods from China only go through customs and inspection once as they enter the U.S. or Mexico, products built by regional manufacturers bear the costs of long and unpredictable border wait times and significant customs requirements each time they cross the U.S.-Mexico border.

This trade relationship requires major infrastructure to function effectively. The largest trade corridor, often referred to as the NASCO corridor, links central and eastern Mexico to Texas, the American Midwest, Northeast, and Ontario, utilizing the key Laredo-Nuevo Laredo ports of entry (POEs). Other important trade arteries include the CANAMEX Corridor, which connects western Mexico to the intermountain United States and Canadian province of Alberta, as well as the shorter but high-volume I-5 corridor connecting California to Baja California. As the economies of both the U.S. and Mexico grow, it is likely that this network of freight transportation infrastructure — and the land POEs that serve as nodes in this network — will experience added stress.

Unfortunately, the infrastructure and capacity of the ports of entry to process goods and individuals entering the United States has not kept pace with the expansion of bilateral trade or the population growth of the border region. Instead, the need for greater border security following the terrorist attacks of 9/11 led to a thickening of the border, dividing the twin cities that characterize the region and adding costly, long and unpredictable wait times for commercial and personal crossers alike. Congestion acts as a drag on the competitiveness of the region and of the United States and Mexico in their entirety. Solutions are needed that strengthen both border security and efficiency at the same time.

The integrated nature of the North American manufacturing sector makes eliminating border congestion an important way to enhance regional competitiveness. The global economic crisis forced manufacturers to look for ways to cut costs. After taking into consideration factors such as rising fuel costs, increasing wages in China and the ability to automate an ever greater portion of the production process, many American companies decided to nearshore factories to Mexico or reshore them to the United States, taking advantage of strong human capital and shorter supply chains. Bilateral trade dropped significantly during the recession but has since rebounded strongly, growing significantly faster than trade with China.

But the growth of trade continues to add pressure on the already strained POEs and transportation corridors. Several studies have attempted to quantify the costs of border area congestion to the economies of the United States and Mexico. In what is perhaps a testimony to the fragmented and geographically disperse nature of the border region, most of these studies have focused on particular North-South corridors of traffic and trade rather than taking a comprehensive, border-wide approach. The specific results of the studies (see table on p. 108) are quite varied. Nonetheless, one message comes through quite clearly — long and unpredictable wait times at the POEs are costing the United States and Mexican economies many billions of dollars each year.

Moderate investments to update infrastructure and to fully staff the ports of entry are certainly needed, as long lines and overworked staff promote neither efficiency nor security. But in a time of tight federal budgets, asking for more resources cannot be the only answer. Strategic efforts that do more with less, improving efficiency and reducing congestion, are also needed. Trusted traveler and shipper programs (i.e. the Global Entry programs, which includes programs such as SENTRI, FAST, C-TPAT) allow vetted, low-risk individuals and shipments expedited passage across the border.

Improving these programs and significantly expanding enrollment could increase throughput with minimal investments in infrastructure and staffing — all while strengthening security by giving border officials more time to focus on unknown and potentially dangerous individuals and shipments. The development of the 21st Century Border initiative by the Obama and Calderón administrations has yielded some advances in this direction, but the efforts need to be redoubled.

The 1990s were the decade of NAFTA and skyrocketing trade. The 2000s saw security concerns grow and recession struck. The new decade has only just begun, but the potential is there for a resurgence of competitiveness and regional integration. There are strong ideas — including trusted traveler and shipper programs, preclearance, customs harmonization, and public-private partnerships — that have enormous potential.

The challenge is now for heterogeneous and geographically dispersed border communities to find a way to speak with a common voice, for policymakers in Washington and Mexico City to guide strategic planning for regional competitiveness, and for all stakeholders to engage vigorously in binational dialogue and cooperation.

Christopher E. Wilson is an Associate at the Wilson Center's Mexico Institute. Erik Lee serves as Associate Director at the North American Center for Transborder Studies (NACTS) at Arizona State University. The two are coauthors of the trade and competitiveness chapter in the forthcoming "State of the Border Report," from which this article was adapted.