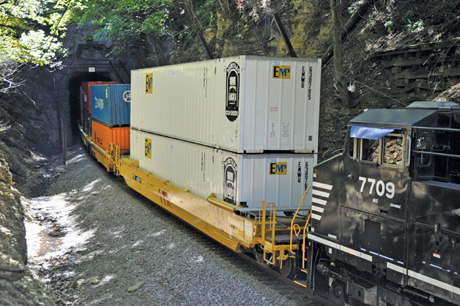 The first double-stack train to roll through the Heartland Corridor emerges from the Cowan Tunnel in Virginia on Sept. 9, 2010. The Cowan Tunnel was the first and longest on the corridor to have its vertical clearance raised.
Photo courtesy of Norfolk Southern

unnels were re-shaped in some cases, tracks lowered or realigned in others. Norfolk Southern Corp.'s aim was the same: to permit double-stack intermodal trains to pass through mountain tunnels where necessary along the length of its Heartland Corridor rail route, which runs from the Port of Virginia to Chicago.

The main Corridor was completed in 2010 and includes the Rickenbacker Intermodal Terminal in Columbus, Ohio, from which a spur southwest to Dayton and Cincinnati was completed in January 2012. The Heartland Corridor's logistics benefits to companies moving goods from the Port of Virginia in Norfolk to the Midwest are clear — a single intermodal train carries the freight of 300 trucks. And the route improves transit time between Chicago and the Port from four days to three on a course that is nearly 250 miles (402 km.) shorter than the route formerly used by double-stack trains.

The project involves increasing the vertical clearances at 61 locations between CSX's new state-of-the-art intermodal terminal in North Baltimore, Ohio, (just west of Toledo) and the East Coast, says Sullivan. The first phase of that project includes improving clearances at 40 locations and will provide a double-stack clearance route as far east as Chambersburg, Pa. "To date, clearances have been achieved at nine locations, construction is under way at 25 others and six are in pre-construction planning. We continue to expect the project to be completed in 2015, in time for the opening of the expanded Panama Canal."

Between the two railroad projects, that's a major boost in freight capacity in Virginia, from the ports on the East Coast west to Roanoke and into southern West Virginia on Norfolk Southern track, and along the north-south I-95 corridor and west to the Midwest on CSX's infrastructure. Both are public-private partnerships, but are driven by the private side, stresses Liz Povar, director of the business development division at the Virginia Economic Development Partnership.

"These are private organizations that understand the global marketplace, and by partnering with them, Virginia becomes the epicenter of opportunities for cost savings for companies, safer and more efficient transportation for companies and for increased product into our commercial markets in the eastern U.S.," she explains. "It's a win-win for both the public sector and the private sector."

Virginia and other states traversed by these rail projects contributed some construction funding and as a side benefit will see less road congestion and fuel emissions. The railroads stand to add customers and to see existing business expand, and logistics-intensive businesses have attractive new distribution options.

"There is a major push under way now to bring manufacturing home to the U.S.," notes Povar. Many of these companies require rail as part of their operation, she says, and a number of those are watching these rail initiatives closely. "We have a very significant caseload of clients in the advanced manufacturing sector who are importing and exporting and require logistics capabilities to jump from the Port of Virginia into the intermodal system," making the railroads' investments quite timely. "The Eastern Seaboard will see significant growth from the widening of the Panama Canal. Its ability to service the commerce that will result from that is a critical piece of American infrastructure we need to pay attention to."