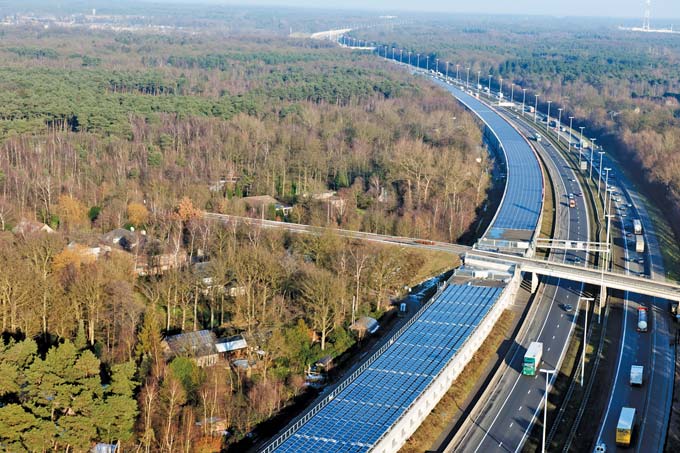 Solar panels cover the roof of the high-speed train tunnel near Antwerp.
Photo courtesy of Enfinity.

ow Corning, which has had a presence in Belgium since the early 1960s, is adding two major projects to its footprint south of Brussels. The company's European headquarters, home to about 700 employees, is based in Seneffe, about 40 km. (25 miles) south of Brussels and about 30 km. (19 miles) north of the border with France. Dow Corning recently opened its Solar Energy Exploration and Development (SEED) center on its Seneffe campus and will soon open a major distribution center nearby.

Dow officials say SEED's location in Belgium will allow the company to draw from a diverse pool of scientific talent.

"About two years ago, we decided to recentralize all of our R&D efforts for Europe in Belgium," says Michel Rens, managing director for Dow Corning, Europe and Seneffe plant manager. "Belgium is very central in Europe, and Seneffe is close to Brussels where the European Community is located. It's a good location to attract foreign employees, quite a few of whom commute from Brussels. We also have quite a lot of French people working on the site."

The €9-million (US$13-million) SEED center will help advance Dow Corning's research in new silicon-based materials and solar cell efficiency. It will be home to 60 researchers, a mix of current employees and new hires. The company expects to begin research activities during the first half of 2012. Rens says Dow Corning is involved in several different levels of solar development. A major effort is the Hemlock Semiconductor joint venture with Shin-Etsu Handotai and Mitsubishi Materials Corp.

"The work we are focusing on is about improving the efficiency of solar panels," Rens says. "Currently solar panels convert about 15 to 17 percent of light into energy. One of the major challenges of the solar industry is to improve that ratio and get more electricity per square meter of panels installed. Industry targets are 20 to 25 percent, and that is part of our involvement."

The SEED complex was designed and built with sustainability in mind, using Dow Corning technologies as well as clean energy sources to achieve high energy-efficiency standards. These include the following:

This combination of technologies has a measurable impact on the new facilities' environmental footprint. Heating costs are anticipated to be 75 percent lower and electricity costs 70 percent lower than an equivalent conventional construction. An air-recycling system will allow the SEED laboratories to achieve a 65-percent energy gain compared to conventionally designed labs, representing a saving of 290 tons of  carbon dioxide per year.

"We have used and prototyped many of Dow Corning's innovations and novel applications, pushing the limits of technical possibilities in optimizing energy use for a laboratory facility, and answering the sustainability demands of new construction standards," says Patrick De Graeve, managing project engineer at Group IPS, the architects who designed the SEED.

"This is a major investment that will support all of our efforts in Europe," Rens says. "Our production sites in Europe will send products to the warehouse and they will be re-dispensed across Europe. Also, goods produced outside of Europe will arrive there and be sold into Europe."

Dow Corning used sustainable architecture and its own silicon-based technologies in the architecture of the building. Also more than two km. (1.2 miles) of concrete floor and wall joints inside the building have been sealed with Dow Corning silicones. Silicone sealants perform well under the stress of UV radiation, extreme heat and cold, and acid rain.

To reduce energy consumption the company increased the levels of roof insulation and installed heat recovery facilities on the HVAC systems. Use of natural lighting was maximized through the use of roof lights and, where possible, motion lighting controls. The structure of the distribution center is also equipped to support solar panels on the roof.

Belgium is generally regarded as a roof-top country when it comes to solar panel installations. The most prolific example of this is the roof of the high-speed rail tunnel in Antwerp. Belgian rail operator Infrabel and renewable energy developer Enfinity have collaborated on an installation of 16,000 solar panels made by China-based Jinko Solar. Dubbed the Solar Tunnel, the installation is the first of its kind in Europe and is the first time that railway infrastructure has been used to generate green energy. The solar energy will be used in Antwerp by both the trains and the station servicing both conventional and high-speed trains.

The massive installation covers a total surface area of 50,000 sq. m. (538,200 sq. ft.), about the size of eight soccer pitches (or, for those keeping score, 10.6 American football fields). The solar energy is used to power the railway infrastructure such as signaling, lighting and heating of railway stations, as well as the trains using the Belgian rail network. The installation should generate an estimated 3,300 MW of electricity per year — equivalent to the average annual electricity consumption of nearly 1,000 homes — and decrease carbon dioxide emissions by 2,400 tons per year.