The giant of South American economies has no plans to slow its growth rate. 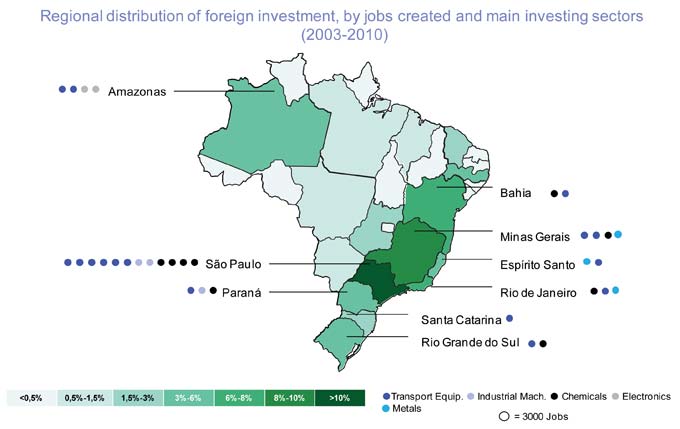 by VALERIU POPOVICI and SABINA AMELIA MERIANO
I

n recent years, Brazil has emerged as the top destination country for foreign investment in Latin America, attracting a third of foreign investment projects into the region, and creating 50,000 new jobs in 2010. Brazil increased six positions as a global destination of foreign projects, reaching fifth place in 2010, after the U.S. and the rest of the BRIC countries, according to the IBM-PLI Global Location Trends report 2011.

Several factors explain Brazil's attractiveness to investors. The giant of South America is the largest market in the region, representing a third of the Latin American population and a total GDP of more than US$2 trillion (equivalent to 43 percent of total Latin American GDP). Its vast and rapidly growing economy is driven by buoyant consumer spending coupled with public policies targeted at increasing social spending and stimulating investment. In addition, the selection of Brazil as host country of the 2014 Football World Cup and the 2016 Summer Olympic Games entails significant investment in infrastructure and worldwide exposure.

Moreover, Brazil is considered by investors as a natural entry point to the South American market, as it shares frontiers with almost all countries in the region (except for Chile and Ecuador). Brazil is a founding member of Mercosur (the equivalent of NAFTA in South America), and is signatory to bilateral trade agreements with most of its neighbors.

Brazil is composed of 27 states, with the eight southeastern states (from Bahia to Rio Grande do Sul) accounting for nearly 70 percent of its population. This part of Brazil is the country's economic engine, contributing nearly 80 percent of Brazilian GDP. These eight states have also attracted almost 70 percent of foreign investment into the country measured by number of jobs created.

São Paulo, with its high concentration of population and relatively good infrastructure, is the main investment-attracting city in the country. However, the city also has the country's highest labor cost levels. Outside São Paulo and Rio de Janeiro, companies can benefit from more competitive labor costs in addition to fiscal incentives and federal programs targeted to attract foreign investments. An example of a successful government policy towards attracting foreign investment outside the coastal areas is the free trade zone of Manaus in Amazonas state.

However, companies should carefully assess the tradeoffs between operating costs and incentives versus the quality of business environment. Generally, lower-cost regions offer weaker or even risky business conditions. It's therefore important to understand to what extent such conditions may be acceptable in order to profit from attractive cost levels.

In recent years, Brazil has succeeded in creating an automotive cluster that is home to the biggest names in the industry operating across the entire value chain. The recent growth in automotive sector investment has resulted from the boost in demand from an emerging middle class not only in Brazil but across the region. Brazil is one of the fastest growing markets for vehicles in the world and has become the fourth largest market worldwide after China, Japan and the U.S. As a result, Brazil was the second largest recipient of foreign investment in the transport equipment sector during 2010, with the sector accounting for nearly 45 percent of the total jobs created from foreign investment in the country during that year.

Besides automotive sector investments, the boating industry has also emerged as a significant source of foreign investment in Brazil, with new projects in Santa Catarina, Espirito Santo and Ceara. Companies from South Korea, Singapore and Italy have been the most important foreign investors in Brazilian shipyards, exploiting the country's growing exports of natural resources and its strategic location with access to the Atlantic Ocean.

Other sectors such as industrial machinery and equipment, chemicals and electronics also saw an increase in job creation through foreign investment in Brazil, with total jobs created from foreign investment in the three sectors reaching approximately 85,000 in the years 2003-2010. During this period, foreign-owned production projects accounted for eight out of 10 jobs, representing almost 250,000 new jobs.

The growth of investment in key industries, such as transport equipment, industrial machinery and equipment, chemicals and electronics, is increasingly driven by recognition of the expertise of the local work force, not only at the blue-collar level but also for higher skilled positions (e.g. engineering and management). Nevertheless, there are concerns that the pool of highly qualified talent may not be sufficient to support the expected growth in the near future. According to the applied research institute IPEA, Brazil will need almost 1.1 million engineers in 2020, nearly double the current number.

Recently, the Brazilian government announced plans to attract specialized workers from abroad, and it is expected that many young European professionals (mainly Italian, Spanish and Portuguese) will be willing to find new career opportunities in Brazil following the trend witnessed in recent years. Work visas in Brazil grew by more than 50 percent to 1.46 million during the first six months of last year. Of this number more than a quarter were granted to nationals from Portugal and Spain alone, according to the Brazilian Ministry of Justice.

At the same time, more and more Brazilian companies are expanding globally. Brazil ranks 22nd as source country for foreign investment around the world. It is the only Latin American country in IBM-PLI's Global Top 25 ranking. Sixty percent of Brazilian projects are destined for other Latin America countries, with Argentina and Mexico attracting more than 50 percent of projects by Brazilian companies during the period 2003-2010. The U.S. tops the list as the main destination for Brazilian investments in the past two years.

Brazilian outward investment is concentrated primarily in the metals, textiles, chemicals, food & beverages and transport-equipment sectors. These sectors accounted for nearly 80 percent of jobs created abroad during the period 2003-2008 by Brazilian firms. Companies such as Gerdau, Vale, JBS, Embraer, Braskem and Petrobas are the main faces of this Brazilian global expansion. In the coming years, we will witness a further acceleration in the global expansion of Brazilian companies. This will be influenced by the growth of Brazilian companies locally supported by the booming local economy, as well as by the Brazilian government's support of the internationalization of homegrown companies.

The surge of Brazil will inevitably boost the region's development. However, to ensure the continuing economic growth and inflow of foreign investment, the Brazilian government will have to ensure that it can remain competitive regionally and globally. The short-term focus of the government should be on making it easier for companies to do business in the country, ensuring the stability of its fiscal and monetary environments and simplifying the labor regulations.

Implementing each of these changes will not be easy, but Brazil has proved over the past decade that it can achieve great changes. Prepare to be surprised.

Valeriu Popovici is a Senior Consultant with IBM-Plant Location International, Brussels, and coordinator of the IBM Global Investment Locations Database (GILD). He can be contacted at vpopovici@be.ibm.com.

Sabina Amelia Meriano is a Research Assistant with IBM-Plant Location International, Brussels, specialized in market research and intelligence for the Latin American region.