A former GM plant in Wyoming, Mich. (left), is one of dozens of shuttered automotive facilities now on the road to a new, repurposed life.
"R

epurposing Former Automotive Manufacturing Sites," a study commissioned by the U.S. Labor Department's Office of Recovery for Auto Communities and Workers, was released in late November by the Michigan-based Center for Automotive Research (CAR). The map portrays some of the study's findings.

CAR researchers found that of the 447 automaker and automaker-captive plants that have been in operation across the country since 1979, "nearly 60 percent — 267 total — have closed and only 180 remain in operation at present. Of the plants closed since 1979, 42 percent of the closures were concentrated between 2004 and 2010. Survey responses indicate that 72 percent of closed plants were one of the top three employers in the community when they closed. Nearly a third of the former plants employed more than 2,000 people at the announced time of closure, and over half employed between 400-999 people. Many of these modern facilities were supported by significant public sector investments in transportation and utility infrastructure."

Of the 139 plants in Michigan, Ohio and Indiana, 36 percent closed in the 1980s or 1990s, indicating they have been closed for eleven or more years without being repurposed. "These long-term closures, combined with the concentration of plant closures since 2000, suggest a need for focused attention to assist in repurposing these sites," said the CAR report. "Whether the resources for this type of intervention are available is a key question."

But the promise is evident: Of the 267 facilities that closed since 1979, 128 have been repurposed, some for logistics, others for entirely new uses such as retail or housing. Usually such activity restores property values, if not employment levels.

"The number of transitioned sites is now trending upward," reports CAR. "While very few sites transitioned to a new owner and a new use before 2000, more than 40 percent of the sites surveyed were purchased for a new use between 2008 and 2010 alone." 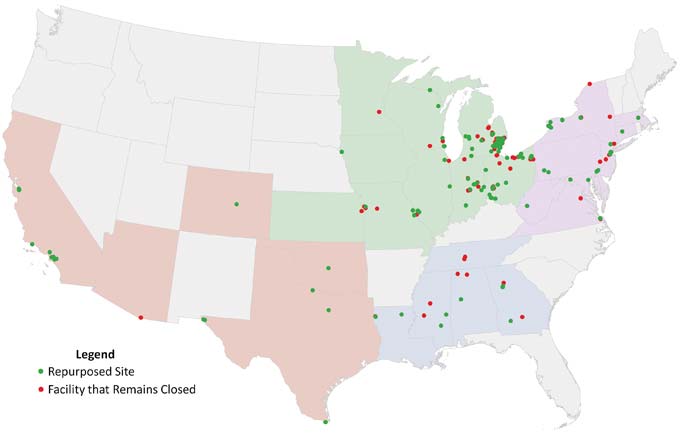 he table below from the U.S. Bureau of Labor Statistics depicts manufacturing hourly compensation costs in the United States in 2010 compared to other nations. From 1997 to 2010, U.S. compensation cost competitiveness in manufacturing improved relative to all but five countries covered: Brazil, Germany, Japan, the Philippines, and Taiwan.

Statistics for China and India are considered less than robust due to difficulty obtaining data, failure to follow international data standards or, in India's case, the fact that "unorganized [or informal] sector manufacturing workers account for approximately 80 percent of total manufacturing employment in India and earn substantially less than their organized sector counterparts."

elow are the top 10 states in percent growth in personal income by quarter for the year ending in the third quarter of 2011, according to the U.S. Bureau of Labor Statistics. Those states which appear at least three times are in bold. Nissan’s existing plant in Aguascalientes, along with another plant in Cuernavaca, helped the company achieve a domestic production record in 2011 of more than 600,000 vehicles.
N

issan Motor Co.,Ltd. announced in late January it plans to invest up to US$2 billion in an all-new manufacturing complex in Aguascalientes, Mexico. The facility, which will complement Nissan's two existing Mexican factories in Aguascalientes and Cuernavaca (south of Mexico City), is scheduled to begin operations in late 2013. Nissan said the location choice hinged on "proximity to Nissan's existing manufacturing plant in the same state, which offers direct access to skilled labor and suppliers."

During the initial phase of its development, the new complex will support production of up to 175,000 units annually of Nissan's 'B' platform products. Further expansion of the site will be considered in phases as product and capacity needs are formalized.

"The new complex in Aguascalientes will allow Nissan's existing and future operations to share critical resources," said the company. "An all-new supplier park also will be built on the site." Up to 3,000 direct jobs will be created initially at the new facility, with approximately 9,000 positions to be generated within the supply chain and wider community. Nissan's total headcount in Mexico will expand to nearly 13,500.

"Mexico is a key engine for Nissan's growth in the Americas," said Carlos Ghosn, chairman and CEO. "Together with our new plant in Brazil, this new manufacturing facility in Aguascalientes is an important pillar in our strategy to ensure that Nissan has the capacity it needs to increase sales volume and market share across the Americas."

In 2011, Nissan set a domestic production record with more than 600,000 vehicles manufactured at its two existing Mexican plants. In 2011, the company sold 224,509 units in Mexico, an increase of 18.5 percent over the previous year, and Nissan Mexicana's 2011 market share of 24.8 percent has never been surpassed by any automotive brand in more than two decades. The company, headquartered in Mexico City, operates corporate, marketing, sales, manufacturing, distribution and design facilities throughout the country including in the cities of Aguascalientes, Distrito Federal, Cuernavaca and Toluca.

Nissan's expansion in Mexico follows the company's recent announcement that it will build an all-new manufacturing facility in Resende in the Brazilian state of Rio de Janeiro. That factory will begin production in the first half of 2014.

Some Visit, Others Stay

In related news, U.S. Citizenship and Immigration Services (USCIS) recently reported 2,364 EB-5 Regional Center Investment Pilot Program visas issued in the first three months of the current federal fiscal year. The EB-5 program rewards with green cards foreign investors and their immediate family members who invest at least $1 million and create 10 jobs in U.S. projects. The program issued 3,463 EB-5 visas during the entirety of FY2011, 1,885 in FY2010 and 4,218 in FY2009.

There are currently 194 approved Regional Centers (RCs), operating in 40 states, including the District of Columbia and Guam. The centers offer investment opportunities across a wide range of projects. The Invest U.S. Regional Center LLC in Colorado, for instance, has welcomed investments in a retail-office complex in Rock Springs, Wyo., and an Interstate Power Systems service center for diesel engines in Gillette, Wyo.

Here are the top five states for number of Regional Centers tracked by USCIS as of early February 2012:

The Association to Invest In the USA (IIUSA), among others, is calling on the U.S. Congress to renew the EB-5 program, which is set to expire in September 2012.

The Northeast led all U.S. regions with a 10-percent increase, followed by an 8-percent increase in the Midwest and 7-percent increases in the South and West. According to the Council, international students currently comprise about 14.2 percent of all graduate students in the United States.

The National Foundation for American Policy released a policy brief in October that says international students who graduate from U.S. universities with advanced degrees in science, technology, engineering, or mathematics (STEM) should get a green card with their diplomas. The paper also says such a policy would significantly benefit U.S. competitiveness and the economy overall.

In "Keeping Talent in America," the NFAP conducted research funded by the Ewing Marion Kauffman Foundation that shows a highly skilled Indian national sponsored today for the most common skilled employment-based immigrant visa could wait 70 years to receive a green card. The report addresses the need for STEM graduate talent and solutions to the backlog.

A study released in November by the University of Arkansas found that international students at the school account for about one-third of the institution's $75.1 million of statewide economic impact. Those students contributed $25.4 million to the Northwest Arkansas economy last year. The impact does not include funding from U.S. sources, such as scholarships. In the fall of 2010, the university had 1,156 international students, who account for roughly 5.4 percent of the 21,400 total student population.

Meanwhile, primary and secondary schools across the nation are pursuing identifications with such programs as the International Baccalaureate program in order to offer more appeal and connection to global cultures and economies. The jurisdictions below have the most IB schools per capita based on the most recently available figures.