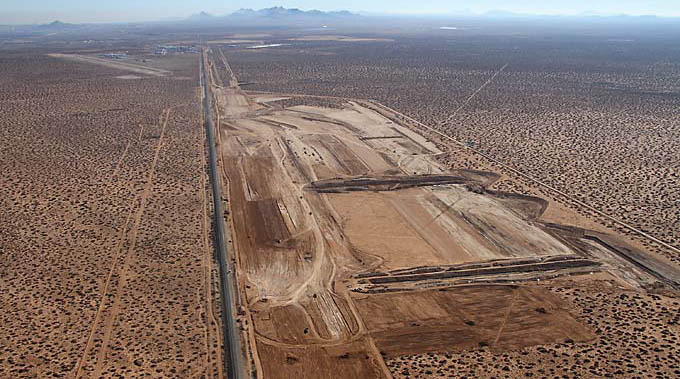 Union Pacific is in the initial phase of building its $400-million intermodal facility near Santa Teresa. The site will eventually employ 600 and is expected to spur additional development.
Photo courtesy of Union Pacific
by JOHN W. McCURRY
D 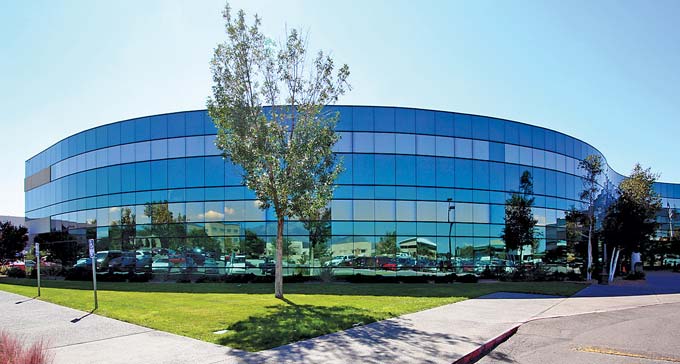 irt moving continues on a large scale near the southern New Mexico community of Santa Teresa. Here, seven miles (11 km.) from the Mexican border and within shouting distance of El Paso, is the beginning of Union Pacific'scolossal new rail facility.

"We really haven't seen an intermodal facility of this scope so close to the border," says Union Pacific spokesperson Zoe Richmond. "It will add a whole new level of potential that we haven't seen anywhere else."

Construction at the 2,200-acre (890-hectare) site will continue through 2015. By the time it reaches full capacity around 2025, Union Pacific estimates 600 people will be working there. The railroad is investing US$400 million in the project.

Once complete, the facility will be 11.5 miles (18.5 km.) long and one mile wide, and will include 200 miles (322 km.) of railroad track and 26 buildings for yard operations. Union Pacific says previous projects like the one in Santa Teresa have stimulated millions of square feet of additional industrial-related development within five to 10 miles (eight to 16 km.) of the rail site, including warehouses, distribution and storage facilities.

"We are starting to see little inklings of this," Richmond says of potential collateral development. "Once we are up and running we will see a lot of potential customers relocating to the area."

Gov. Susana Martinez came to Santa Teresa last April to clear the way for the project by signing legislation providing for a locomotive fuel tax exemption. She also signed a bill authorizing special permits for operation of certain overweight commercial vehicles near the southern border.

Martinez believes the efforts near the border are among some positive changes afoot in her state that are providing a foundation for sustained economic growth.

"We have a port of entry that is not over the river; it's all land so you can carry heavier trucks across the port that will go right to the hub and Union Pacific," Martinez tells Site Selection. "We have a lot to offer. When we turned around the Union Pacific project with the removal of tax on locomotive fuel, it made us enormously competitive. We had a lot of space, it's near a port of entry and the site had an airport nearby."

Further momentum in the southern part of the state has come from recent meetings with governors of five Mexican states to discuss projects and initiatives that might benefit from the Union Pacific facility and from infrastructure projects such as a recently announced water treatment facility in Santa Teresa.

Martinez also acknowledges that the state has considerable challenges to surmount, starting with not being as competitive as its neighbors. She cites last year's Ernst & Young competitiveness study that ranked the state dead last in competitiveness of state and local business taxes on new investment.

"We have a lot of work to do," Martinez says. "We are working for legislation action right now, proposing tax reform."

Martinez is tackling the economy on several fronts, including work force training. She is asking the legislature to fund the state's Job Training Incentive Program (JTIP) to the tune of $10 million, a tenfold increase over previous years. She believes it's an incentive that will reap rapid benefits.

"I have seen businesses that can't hire enough welders, but with the JTIP, they can train them. It's a real important incentive. We are also working to make sure our kids are getting the right vocation education options."

Martinez says she hopes to build on the state's other recent successes, notably in the Albuquerque area, where Lowe's is opening a customer contact center with 600 employees and General Mills recently invested $100 million in an expansion of a facility that was recently awarded LEED Gold certification.

Martinez says she is trying to improve the state's reputation regarding business, which she says is a concern voiced by companies looking at New Mexico.

"New Mexico unfortunately has had the reputation of not being predictable when it comes to business. Companies are concerned about a lack of predictability. I let them know that the previous administration is gone and that the government is not in the business of selecting who are winners and who are losers."

Another challenge is changing the state's tax code, which Martinez admits keeps the state from being competitive. She also says that sometimes environmental regulations have been based on political ideology rather than science. She cites the state's diverse energy sector as having tremendous potential.

"We have an enormous opportunity in New Mexico to embrace how energy-rich we are with the sun, wind, minerals, oil, coal and algae," Martinez says. "We are an energy-rich state as long as we embrace it in an environmentally safe way, understanding regulations are there to save groundwater, but not for politics."

The area around Hobbs is known as the center of New Mexico's energy corridor, much of which is centered around nuclear energy. A Massachusetts company has a different type of energy facility in mind for the eastern New Mexico city.

Cambridge-based Joule has been issued two patents for producing ethanol and diesel from sunlight and waste carbon dioxide. The company believes its process, which does not depend on biomass feedstocks or downstream processing, can yield renewable fuels and chemicals at huge volumes using a fraction of the land required by current methods.

Joule, which has raised more than $110 million in private equity funding for the project, hopes to commission a test facility in Hobbs later this year. Joule has leased 1,200 acres (485 hectares) in Lea County that it says meet its requirements for production, which include high solar insolation (the amount of solar radiation reaching an area), access to non-potable water and waste carbon dioxide. Joule has billed its process as production of "Liquid Fuel from the Sun."

The company says it will be able to deliver diesel and ethanol for as little as $0.60 per gallon. Fluor was awarded a contract for the firm's demonstration plant in February. 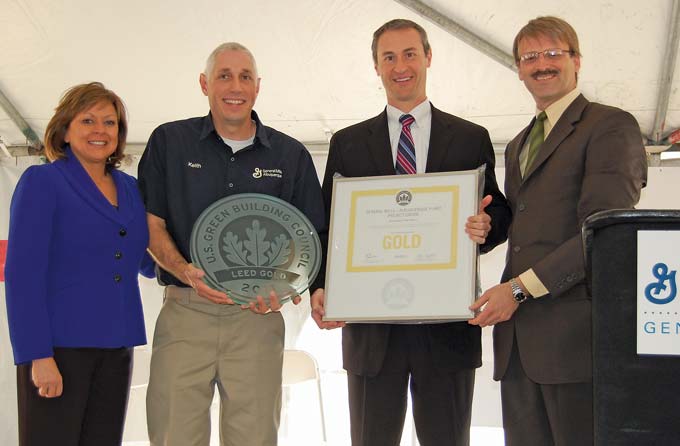