Companies find minds are a wonderful thing to employ. 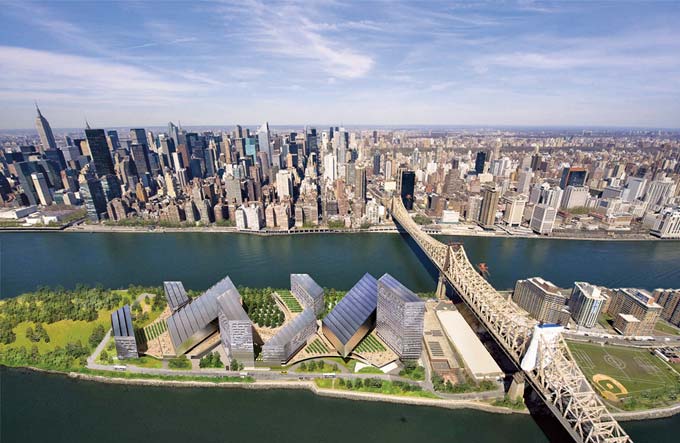 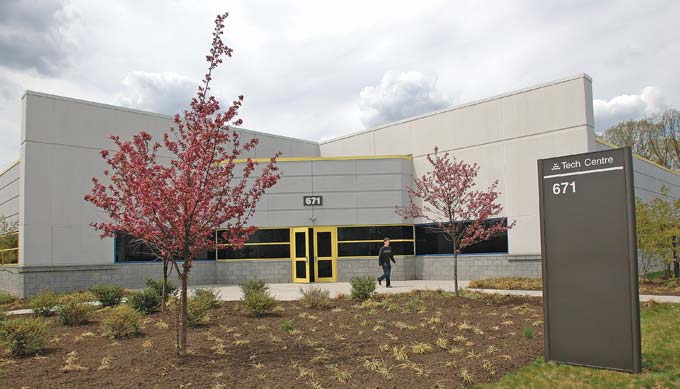 Watson Pharmaceuticals will establish a 50-person global R&D center at the New Jersey Technology Centre, which is also home to the Information Network Laboratory (WINLAB) and Energy Storage Research Group (ESRG) operations of Rutgers University, housed in this building.
Photo courtesy of Rutgers

here are reasons that New Jersey (second), New York (sixth) and Pennsylvania (ninth) all place among the top 10 states in total R&D. Certainly the region's strength in the nation's leading R&D recipient sector, chemicals, and its pharmaceuticals subsector is one: Company-funded pharmaceuticals R&D alone, at $45.2 billion, accounted for nearly 16 percent of all U.S. R&D in 2008 (the most recent year for which National Science Foundation data is available). The 2012 Global R&D Funding Forecast from Battelle and R&D Magazine calls for business spending on R&D to increase in 2012 by 3.8 percent.

R&D power is also undergirded by the high reputation of the region's higher education community. Whether rep and IP translate to royalties and IPOs is another question. But there are increasing efforts to set the stage for winning answers.

Some are not so new, but plenty innovative. Take Pennsylvania's Ben Franklin Technology Partners program, which in the southeastern/Greater Philadelphia region alone has invested in nearly 40 percent of Greater Philadelphia's early-stage technology companies that received venture funding over the past five years. "We funded and assisted 338 companies, and our clients created 1,400 high-technology jobs," says a recent report from the organization looking back at those five years. "We committed $30 million to more than 200 companies, and our clients raised more than $850 million in follow-on funding." Those firms more often than not have ties to such institutional names as Drexel, University of Pennsylvania, Penn State, Temple, Bucknell, Lehigh, LaSalle and others.

Another tried and true institutional anchor in the region is the State University of New York (SUNY) network of 64 campuses, which host 465,000 students. The system recently received 24 awards totaling $40 million through New York's Regional Economic Development Council initiative to use local expertise to drive economic growth and create jobs. Half of that amount is going toward building, land and infrastructure improvements for the computer chip commercialization center at the Marcy Technology Complex at SUNY IT in Oneida County.

Other winning projects include the RNA Institute of Biomedical Translational Research (Univ. of Albany); CNY BRC, a bioscience incubator operated by Upstate Medical University that is scheduled to open in June 2012 at a brownfield site in the heart of Syracuse; and a smart grid research program at Stony Brook University on Long Island.

Preston Gilbert, operations director for the SUNY Center for Brownfield Studies in Syracuse, bring more than 30 years in economic development experience to his post. He says the system's network of expertise and students offers "a rich pool to fish from." Among other projects, he's leading an effort to study the potential redevelopment of pulp and paper mills throughout the northeast and New England for use in creating biofuels, chemicals and other products from a unique hot water extraction process.

SUNY Chancellor Nancy Zimpher, known for her work connecting the academy and business during her tenure at the University of Cincinnati, plans to extract more value for the corporate community from SUNY's footprint. She said in January that the system in 2012 "will use labor statistics to calculate sector demand, from business and the social sector, and by region, for a qualified work force. Then second, we will focus on our individual campuses, or clusters of campuses, to adjust program offerings and enrollment patterns to meet these sector demands."

No Ivory Towers ... But An Island Will Do

In December, New York City Mayor Michael R. Bloomberg, Cornell University President David J. Skorton, and Technion-Israel Institute of Technology President Peretz Lavie announced plans to build a 2-million-sq.-ft. (sq.-m.) applied science and engineering campus on Roosevelt Island in New York City. The selection of the Cornell/Technion consortium was the result of the city's Applied Science NYC initiative, which seeks to "increase New York City's capacity for applied sciences and dramatically transform the City's economy." Among several reasons for the consortium's selection were the institutions' long success in spinning out new businesses from scientific breakthroughs, and the proposal's focus on academic collaboration with the private sector.

In addition to the Roosevelt Island site, the city will also provide $100 million in capital to assist with site infrastructure, construction, and related costs. In addition, the city is engaged in what it calls "productive discussions" with the other respondents — Carnegie Mellon, Columbia and a New York University-led consortium — "and the possibility of additional science and engineering partnerships in the city is still open," possibly on available city land at the Navy Hospital Campus at the Brooklyn Navy Yard or on Governor's Island.

"Thanks to this outstanding partnership and groundbreaking proposal from Cornell and the Technion, New York City's goal of becoming the global leader in technological innovation is now within sight," said Bloomberg.

Cornell also announced that it received a $350 million gift from an anonymous donor, the largest contribution in the university's history and one of the largest in the history of American higher education, which will support the NYC Tech Campus project.

Ultimate completion of the campus for up to 2,500 students and 280 faculty is projected by the year 2043. Prior to commencement of construction on Roosevelt Island, Cornell/Technion plans to open in an off-site location in 2012, with the first phase of the permanent Roosevelt Island home expected to open by no later than 2017. Cornell/Technion has agreed to a 99-year lease for the Roosevelt Island site, with an option to purchase the land at the end of the term for $1. Cornell will develop and own the campus itself, and will assume financial responsibility for its establishment and operations.

The campus will be organized around three interdisciplinary hubs: Connective Media, Healthier Life, and the Built Environment. Cornell will immediately offer Master and Doctoral degrees in areas such as Computer Science, Electrical and Computer Engineering, and Information Science and Engineering. In addition, after receiving the required accreditation, the campus will also offer innovative Technion-Cornell dual Master of Applied Sciences degrees.

An economic impact analysis completed by the New York City Economic Development Corp. projects that the new campus will generate more than $7.5 billion (NPV) and more than $23 billion (nominal) in overall economic activity over the course of the next three decades, as well as $1.4 billion (nominal) in total tax revenue. The campus alone will help create up to 20,000 construction jobs and up to 8,000 permanent jobs. More importantly, the campus is expected to generate nearly 600 spin-off companies over the projection period.

In the technology sector, employment in New York grew by nearly 30 percent between 2005 and 2010, with total employment now at nearly 120,000. Also, in 2010 New York surpassed Boston to become the number two recipient of venture capital funding for technology companies, while in the third quarter of 2011, New York surpassed Boston in venture capital funding across all categories.

After relocating its headquarters to New Jersey in 2010, Watson Pharmaceuticals in January announced plans to establish a Global R&D Technology Center in North Brunswick, N.J., leasing a 32,000-sq.-ft. facility at the New Jersey Economic Development Authority's Technology Centre of New Jersey, a 50-acre complex consisting of lab, production and office space. Watson, known for its generic pharmaceutical development, intends to initially invest approximately $4.5 million in outfitting the new facility. Expected to be completed in the spring of 2012, the facility will employ approximately 50 scientists, chemists, engineers and support staff.

"Watson is pleased to continue to work with Governor Chris Christie, Lieutenant Governor Kim Guadagno and the Partnership for Action team as we expand our presence in New Jersey," said Paul Bisaro, President and CEO of Watson. "The location of the new Global R&D Technology Center will enable Watson to leverage our proximity to such educational centers of excellence as Rutgers University. This will enable Watson to establish collaborations with University departments including pharmaceutics, chemistry and engineering and permit us to benefit from the talent pool in the heart of the pharmaceutical industry of New Jersey.

In its new, 149,000-sq.-ft. Parsippany headquarters complex, Watson combined senior management and global generics and brands administrative functions previously in separate facilities in the Morristown and Parsippany area, as well as relocated remaining corporate leadership functions including finance and legal functions that had previously been located at Watson's Corona, Calif., site.

Watson joins such companies as Merial Limited, Chromocell Corp. and Rutgers Technology Center II — home to WINLAB and Energy Storage Research Group. The complex also includes the Commercialization Center for Innovative Technologies, which houses 22 emerging technology companies and is one of only 23 business incubation programs from around the world that have earned the Soft Landings International Incubator designation from the National Business Incubation Association.

Michael Pazzani, vice president for research and economic development at Rutgers, says one thing that attracted Watson was an NSF-funded research center funded by $5 million annually that focuses on the manufacture of pharmaceuticals.

"They also indicated they'd be interested in working with our chemistry department, and with Princeton, about 25 miles down the road from us," says Pazzani, noting the attractive incentives and support offerings put together by the state's business action group and its Choose New Jersey program. He says companies often talk to Rutgers about research cooperation (as in this case), but they're also interested in simply hiring students, especially those pursuing studies in the computer science and engineering fields.

Asked to assess his institution's evolving IP policy, Pazzani says, "I think we're a lot easier to deal with in general, and less bureaucratic than we were a decade ago. We get contracts signed in weeks instead of months. I was in another university that took 12 months to negotiate a 13-month research contract."

Pazzani hastens to add that Rutgers doesn't give things away, but "we can be reasonable to work with. On the other hand, we don't add such high royalty rates that companies go designing around our inventions." And in some cases, the Rutgers campus proves more amenable than the corporate campus:

"Occasionally, very large companies find it easier to run an animal study with Rutgers than to do it within their organizations," he says. The school also has a new search engine (ora.rutgers.edu) where companies can search for expertise.

Rutgers is now finalizing a report on a planned 100-acre technology park on campus, with 95 percent of that space set aside for corporations. Rutgers is working with Battelle to set up the organization that would lease the land from the university and develop it.

"Two or three years from now," says Pazzani, "we hope a company like Watson could lease space right on our campus."