Positioning for the Future:
The Panama Canal Effect 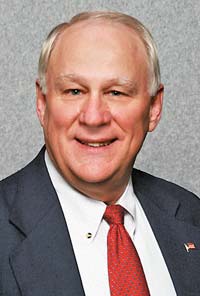 iming is crucial in logistics. For logistics centers and inland ports, timing and location is even more important.

The risks and uncertainties in the global economic and financial marketplace can make site selection decisions more like an exercise in reading the tea leaves correctly. Not exactly an exact art.

Here's a case in point from a few years back that has ramifications and lessons for today.

In 2006 and 2007 the Trans-Pacific container trade was booming, plans for a major Panama Canal expansion were still pretty much on the drawing board and major port and rail expansion projects on Canada's west coast were just getting under way. Burgeoning all-water services from Asia to the U.S. East Coast were viewed mostly as a mild irritant and a distant threat. Besides, business was booming! There was plenty to go around for all comers.

During this period the Port of Tacoma was setting records for its intermodal volumes to Chicago and the East Coast. The port was on a roll and in the middle of a major terminal expansion program — one being a massive new container terminal for NYK that would be built from the ground up and scheduled to open this year. The port also purchased a 745-acre tract, known as the Maytown property, in a rural area about 33 miles from the port. The plan was to develop the property as a major rail logistics center to relieve train congestion at the port.

Those plans were extinguished by the subprime crisis and subsequent economic collapse. The NYK terminal project is a fading memory and the Maytown center, which was strongly opposed by local residents, was abandoned. The port sold the property in 2010 to a gravel mining company at a loss of $10 million.

Today, whatever trade and economic recovery that is occurring is fragile at best. So the question is: Will the $5.25-billion Panama Canal expansion save the day? When completed in 2014, the project will double the canal's capacity and allow most of today's larger "post-Panamax" container ships to traverse it.

The answer to the Panama Canal question is mixed, depending on which coast is involved. For struggling facilities on the West Coast the all-water threat to volumes and market share is now a clear and present danger.

For ports and logistics centers on the East Coast the possibilities are more intriguing, but also something of a double-edged sword. That's because ports such as Savannah, Miami, Charleston and Norfolk (which already has a 50-foot draft) are in a difficult position. They want to prepare for a potential surge in volumes through the Canal in 2014, but there's really no way to know in 2012 what the global and U.S. economy and global trade will be like, or how carriers will arrange their all-water strings. If there's a boom (or boomlet) and they are prepared they could prosper; if they are not prepared they'll lose out. If there is not much of a commercial uptick from the Canal — or carriers do not go all-out for all-water or the economy collapses again — then new facilities could turn into underutilized financial albatrosses.

The West Coast, specifically the Los Angeles area, still has a huge infrastructure advantage over every other U.S. market. Not only is the area supported by the two largest container ports in the U.S., our research indicates that the infrastructure of logistics buildings (as classified A, B, & C by Grubb & Ellis) also significantly favors the area. The Southern California region, for example, has some 955 logistics-classified buildings of more than 200,000 square feet in size totaling over 580 million square feet. Meanwhile Norfolk, Va.; Savannah, Ga. and Charleston, S.C., have a combined 117 logistics buildings in this same size range with a total of about 70 million square feet, and none of these Eastern ports have vacant and available facilities of 1 million square feet or more.

Those numbers, along with the availability of land close to the ports, indicate there is an opportunity for expansion on the East Coast, if ports there are capable of generating bigger shares of the all-water trade through the Canal starting in 2014. But the bigger issue at the moment is dredging to meet the water draft requirements of the bigger ships down to 50 feet.

Many ports are gearing up for the Panama Canal effect:

White Hawk Has It All

hen company executives decide the time has come to build a new facility, the decision is never taken lightly. Many factors must be considered: Is there an available workforce and can they be trained? Does the infrastructure meet the company's needs? Are state and local leaders friendly to business?

For the North Eastern Strategic Alliance (NESA) — a regional economic development organization representing nine counties in South Carolina's northeast corner — they answer these questions with a simple catch phrase "the NESA region has it all," and for many employers they do. The perfect example is Florence, South Carolina's White Hawk Commerce Park.

White Hawk is a shovel-ready, 1,175 acre industrial park crafted under the CSX Corporation's Select Site Initiative. The initiative focuses on access to rail services, proximity to highways, workforce availability, and access to natural gas, electricity, water, and the like.

The park is situated in the heart of the NESA region, which itself is centrally positioned on the eastern seaboard. The site boasts direct access to I-95 and I-20, as well as two side-tracks, and unit train capabilities. White Hawk is located an hour away from the Port of Charleston and just a half-mile from the Florence Regional Airport. In sum, shipments coming out of White Hawk can reach the far-east or the mid-west without a problem.

Beyond location and transportation, White Hawk's on-the-ground infrastructure doesn't disappoint either. The site is fully equipped with access to Progress Energy transmission and feeder lines, City of Florence water, SCANA 6" and 4" natural gas lines, as well as telecommunication and high-speed fiber optics.

Now while White Hawk is at the top of any list of shovel-ready industrial parks, we cannot pretend like it is a wonder unto itself. All the infrastructure, highways, and rail lines will not make a company successful, if there isn't community support and direct access to strong human resources. But for the folks in the NESA region, this is not a new aberration — frankly they've known what businesses are looking for on these fronts over a generation.

When the Presidential candidates recently passed through South Carolina, they were nearly singularly focused on jobs, and the economy. And certainly every economic development officer welcomes any elected official's decision to focus on these topics, but for the hardworking citizens of South Carolina's NESA region, jobs and the economy have been the focus for decades.

As a result, South Carolina is home to one of the most business friendly environments in the United States. It is a right-to-work state that boasts low tax-rates, and myriad incentives to new employers.

In some circumstances South Carolina provides tax credits of up to $9,000 per job created by qualifying companies. These credits can offset up to 50 percent of a company's state income tax. And if a business does not use the full credit in the first year, there is a rollover program in which unused credits can be carried forward for a full 15 years. The State even provides sales tax exemptions on electricity and fuel used in manufacturing processes, machinery and equipment used in production.

Yet in spite of this emphasis on low taxes, the State maintains a competitive level of investment in education and workforce development. For example, two leading technical colleges are located just down the road from White Hawk, and through the State's Ready SC program, qualifying new employers can train their workforce at no cost.

South Carolina and the NESA region are absolutely committed to developing the local economy — and employers around the country are taking notice. Not far from the White Hawk site, one finds facilities associated with leading companies including General Electric, Heinz, Dupont, ESAB, Federal Express and more.

In 2008, Florence, South Carolina was ranked fifth in the nation by The Miliken Institute for Business Expansion. Looking at the White Hawk Commerce Park, it's easy to conclude that four years later, the region's only gotten better. 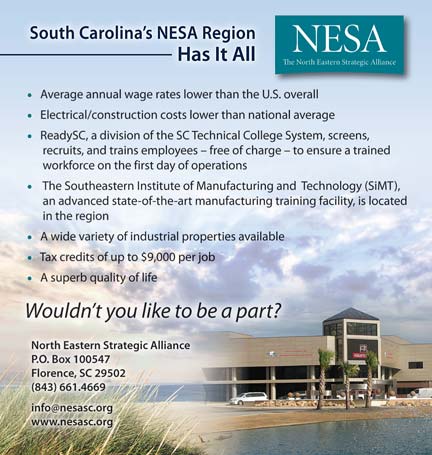