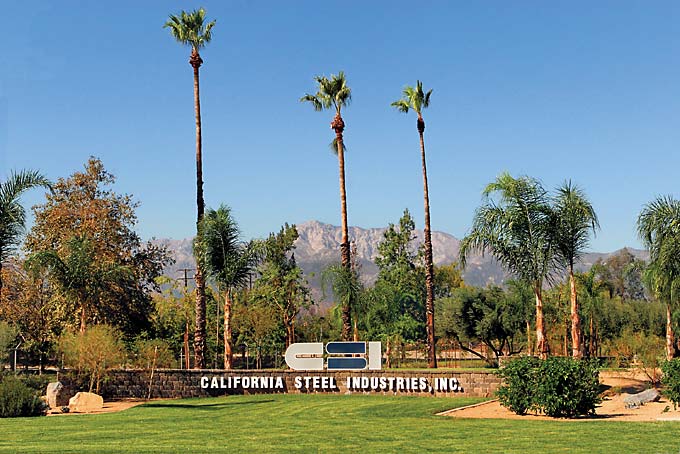 "The workforce of this area is the most vital thing in our company's success," says Guge, executive vice president of finance and administration at the Fontana-based company. "It is a real difference-maker for us."

Guge notes that "we have never had a layoff in our 27-year history, even through the Great Recession. We are very loyal to our employees and they are loyal to us."

In the last two years, CSI has spent more than $70 million on a new reheating furnace that is the most environmentally efficient in the U.S. steel industry. "As the economy improves, we will increase our capacity and hire some more people," says Guge.

CSI employs 900 workers at its 450-acre plant in Fontana, about 50 miles east of Los Angeles. The plant experiences very little worker turnover, notes Guge. "We have about 7 percent turnover including retirements," he says. "Most people who come to work here stay here."

Workforce tends to be the driving factor in corporate relocations and expansions in San Bernardino County, a two-million-resident metropolitan area that boasts a labor pool of 900,000 people.

In 2011, the 20,000-square-mile county added nearly 2,500 jobs to its local economy, including significant activity from manufacturers.

"The support that businesses receive from the San Bernardino County Economic Development Agency and local government is outstanding," Guge says. "You will not get any more support in California than what we receive here."

CSI takes advantage of a county program that conducts on-the-job training of electricians and mechanics. "The program began 13 years ago and we have been very successful in developing high-quality technicians who have become fully qualified craft workers at CSI," notes Guge.

Other factors contribute to CSI's success in Southern California, adds Guge. "Logistics is the absolute reason we are able to be in business here," he says. "With access to several major freeways, Burlington Northern Santa Fe and Union Pacific rail, and the Ports of Los Angeles and Long Beach, we get all the support we need for importing raw materials. We receive virtually daily shipments of our feedstock from the ports. It is our lifeline."

The weather is a plus too, he adds. "It is not very difficult for us to get people interested to come to work here," Guge says. "We get sunshine more than 300 days a year. It is a great place to live, and it is close to the beaches and mountains."

A Market of 23 Million Buyers

CSI is far from alone in choosing San Bernardino as a place to expand. United Furniture Industries scoured the entire Western region of the U.S. last year before selecting Victorville for a 505,192-sq.-ft. manufacturing and logistics plant.

"We looked at Northern California, Arizona, Nevada, Utah, Oregon and Colorado as part of our site selection process," says Bob Cottam III, vice president for Piedmont Risk Management and company spokesman for UFI. "When we learned about the attractiveness of the Inland Empire, we decided to dig a little deeper in Southern California."

What they found was a marketplace of 23 million people within a three-hour drive of northern San Bernardino County. "According to the 2010 Census, there are 55 million people living in the West, and nearly half of them live within three hours of Victorville," Cottam says. "If you are making furniture, and transportation is a significant component of your cost of goods, then that market makes a lot of sense for us."

UFI found another critical factor in the region: suppliers. "We did an in-depth survey of our vendors — framers, foam suppliers, etc. — and found that we had every vendor we needed along Interstate 10 or Interstate 15 within an hour of Victorville," says Cottam. "By the first of June last year, we had narrowed down our search to Victorville, Stockton (Calif.) and Las Vegas. From there, we went to work drilling down on real estate pricing and availability, permitting and labor markets. We were able to concoct a much more aggressive real estate deal in the High Desert."

UFI completed the lease and transaction for tenant upfits by Sept. 8. "We started making furniture there on Sept. 15," Cottam says. "We had tremendous participation in getting things done, from air permits to building permits to everything else we needed."

Stirling Capital Investments, the developer of the project, expedited all aspects of the deal, notes Cottam. "Our timetable was to be manufacturing furniture at the beginning of the fourth quarter of 2011, and with their help we actually closed on the deal a few weeks early," he says. "They are some of the best people we have dealt with in my 35-plus years in business."

UFI took about half of Stirling's 1-million-sq.-ft. building in the SCLC. Mars, the chocolate company, took the other half. "We are using about 200,000 square feet for manufacturing and the other 300,000 square feet for distribution," Cottam says. "We have about 80 workers on site now and will eventually grow to 400 employees."

Finding a home for a manufacturing plant in California can be challenging, many executives admit, but Steve Andrews says that is not a problem for his firm — Products Techniques in Rialto.

The company makes paints, coatings and paint removers that are used on aircraft and defense equipment. "We need to be in a location that permits this activity from a zoning perspective, and this is one of the few places in Southern California that allow really heavy manufacturing," says Andrews, president of PT.

Andrews' father ran the company for many years in Los Angeles County before deciding to relocate the firm to San Bernardino County in 1982. "They moved here because the cost of living and the cost of doing business were much better," Andrews says. "The crime rate was much lower too."

Andrews, who has been running the company for the past 14 years, says that assistance from the county has enabled PT to grow. "I have used their employment and labor group for work-force development," he says. "I have been able to take advantage of subsidy programs for hiring. We worked with California Manufacturing Technology Consulting and the San Bernardino County Workforce Investment Board to secure a grant to help fund our ISO certification. That enabled us to retain our defense business and increase our sales."

PT employs 14 workers and occupies 12,000 sq. ft. on an acre of land on Riverside Avenue between I-10 and the 60 Freeway. Sales are up 25 percent this year, notes Andrews.

"We have been able to retain our workers and add two new employees in the last two years to help us keep up with increasing sales," he notes. "If things continue to move in the same direction, we expect to expand our facilities in the next two years or less."

The area's transportation network is a big factor in the company's growth, he adds. "One of the most convenient things about our location is the transportation hub for shipping," he says. "Every logistics location here is within a mile and a half of us. I cannot think of a more convenient location for shipping and receiving. It is absolutely phenomenal. The rates for shipping here are the least expensive too."

Andrews notes that "we are close to Ontario Airport, just 20 minutes away, and the regional airport at Riverside. We are close to Corona, and we are only an hour away from Long Beach Harbor, one of the biggest and busiest ports in the world."

Andrews credits the county with being very supportive of the needs of local businesses. "In my experience, they are very proactive," he says. "They follow up with us regularly, but they are not a nuisance. When they have a new program, we hear about it. They seem to be very interested and sincere in doing whatever they can to help us. If I call them and ask for help, they are on it right away. There is no foot-dragging. There is no bureaucracy getting in the way."

Larger companies are expanding in San Bernardino too. Atlanta-based Home Depot, for example, moved into a 667,000-sq.-ft. distribution facility in Ontario near the intersection of I-10 and I-15.

The national home improvement retailer rolled out a series of "rapid distribution centers" in California to expedite delivery of products to more than 500 stores in 13 Western states.

Home Depot cited access to the ports, railways and major freeways as central to their selection of Ontario. The company also cited the area's quality of life as being a plus for the firm's workforce.

"There is a trend toward onshoring of manufacturing because of logistics costs and rising labor costs in China," Olhasso says. "As a result, we are seeing a good amount of manufacturing projects in our community. Having a workforce of 900,000 people within a 30-minute drive is a real plus. Many of them are well skilled in the manufacturing sectors in great demand these days."

"Logistics is a very large sector here," notes Olhasso. "The I-10 Corridor is rapidly filling up with big-box distribution centers, and so is the Victor Valley area."

Two emerging sectors are wind power and solar energy. "Some of the larger solar energy companies are either negotiating for deals or are under construction right now in the county," she says. "The wind farms are primarily in Riverside County, but we are getting some interest from them too."

In all industrial project deals, says Olhasso, the overriding consideration is the work force. "Having a well-trained workforce is the biggest concern of the corporate end-user. The responsiveness of our Workforce Investment Board is exemplary. Our workforce training program is very simple to use and it is tailored to the needs of each company. It is very rewarding."

One of the dominant players in San Bernardino County is the City of Ontario. The 50-square-mile city at the intersection of I-10 and I-15 serves as the Inland Empire's regional distribution center for goods moving between Los Angeles and Las Vegas.

Some of the world's largest companies — including United Parcel Service and Toyota — have located their Western U.S. regional hubs in Ontario.

"The location advantages are what we continue to market," says John Andrews, director of economic development for the City of Ontario. "Cargo trucks can make two trips back and forth to the port each day. We have 90 million square feet of industrial space under roof right now. We have some projects going through the entitlement and approval process now for start in either 2012 or 2013."

Hillwood Properties is proposing a large distribution center project adjacent to the airport. Together with other planned developments, industrial space under roof could soon reach 100 million sq. ft. in Ontario, says Andrews.

"That reinforces our position in the region," he notes. "This is a job development center here in Southern California. The Inland Empire is a good place to do business and create good-paying jobs for the region."

San Bernardino received another shot in the arm recently when the 17th annual Kosmont-Rose Institute Cost of Doing Business rated parts of the county as some of the least expensive business locations in California.

Hesperia and other parts of the High Desert ranked among the Golden State's best business bargains, according to Kosmont.

This investment profile was prepared under the auspices of the San Bernardino County Economic Development Agency. For more information, contact Mary Jane Olhasso at 909-387-9801 or by email at molhasso@sbcounty.gov. On the web, go to www.sbcountyadvantage.com. 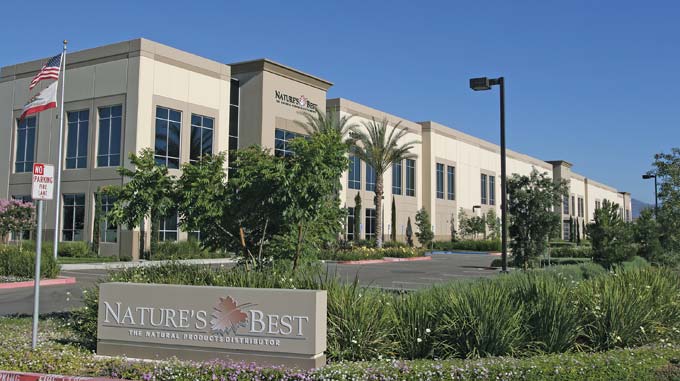 Watson Land Company’s 409,000-sq.-ft. cross-dock building in Chino is leased to Nature’s Best. It is a part of the 1.2-million-sq.-ft., four-building Watson Commerce Center. All buildings are LEED Gold certified.
Photo courtesy of Watson 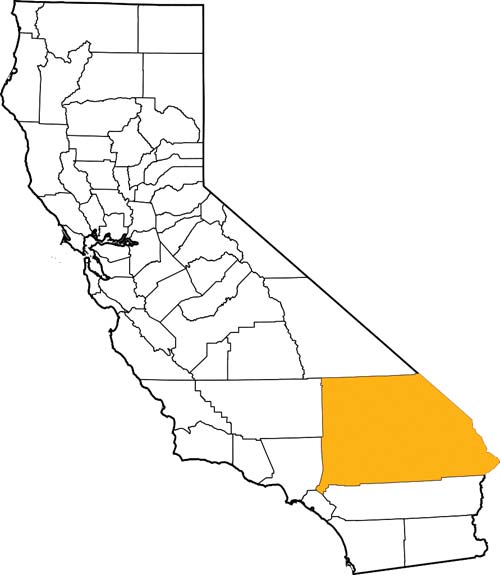 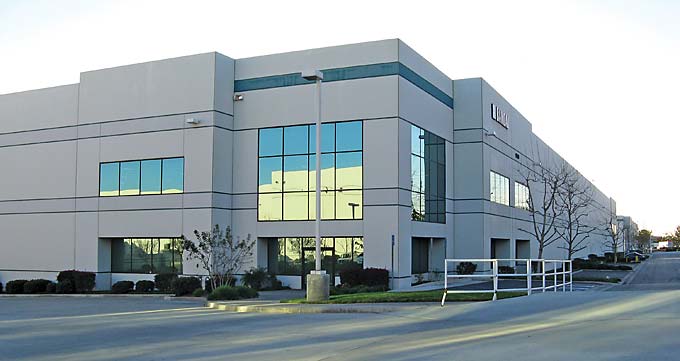