Daimler’s recent investments include its new project with Beijing Automotive Industry Corp. in China (left) and continued expansion at its successful Mercedes-Benz plant outside Tuscaloosa, Ala. (right).
Photos courtesy of Daimler
by ADAM BRUNS
F 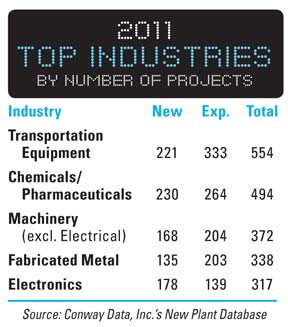 our of the top five industries for corporate facility projects in 2011 showed substantially more expansions at existing sites than at new locations — as good a sign as any that companies not consolidating outright are at the very least sticking to what they know.

That's one conclusion to be drawn from the data collected year-round in Site Selection's proprietary New Plant Database, which qualifies private-sector facility projects that meet one of the following three criteria: at least US$1 million invested; at least 50 new jobs created; or at least 20,000 new sq. ft. (sq. m.) of new or refurbished space.

China, India and South Korea continue to garner strong shares of projects across multiple industries. But project evidence also indicates that the U.S. reshoring phenomenon is more than media-driven hype.

While automotive industry projects again lead the way in annual project tallies over chemicals/pharmaceuticals, machinery and fabricated metal, one thread running throughout all the top-ranking industries is energy, whether associated with electric vehicle batteries, turbines, polysilicon and solar cells and modules, or natural gas.