An Arizona tribal community lays the groundwork for growth.

Southern Dunes Golf Club, purchased by the Ak-Chin Indian Community in 2010, has rocketed to No. 60 on Golfweek’s Top 100 Resort Courses in 2011, after winning Troon’s internal Turnaround Course of the Year award in 2010.
by ADAM BRUNS
O

ne hundred years ago, Native American Jim Thorpe, whose Indian name means "Bright Path," was declared the greatest athlete in the world at the 1912 Olympic Games in Stockholm, Sweden.

That same year, in May, President William Howard Taft created by executive order the Ak-Chin Indian Community, designating more than 47,000 acres as its Arizona home, less than an hour south of Phoenix in Pinal County. Four months later, after intense lobbying by area farmers and other interests, that allotment was reduced by the federal government to less than 22,000 acres.

Today Ak-Chin Indian Community and business leaders are reclaiming land. But their eyes are on the bright path to the future, as they seek to foster enterprise instead of entitlement. They are taking actions that will result in a balanced and diverse economic future for their fewer than 900 residing members, but also for the larger Phoenix region with which their destiny is intertwined, a crucial hub of what AECOM's Global Cities Institute calls the "Sun Corridor Megaregion."

In February the 450-acre former Phoenix Regional Airport property, purchased by the Ak-Chin Indian Community in 2006, was officially renamed Ak-Chin Regional Airport. Armstrong Consultants' planned improvements include renovations of the 5,000-ft. runway and taxiway, new runway lighting, renovation of the FBO (Fixed Base Operations) building and additional enhancements. Initial construction is planned to begin by late spring 2012 with a grand opening by the end of the year.

Just five minutes from the Airport, the Santa Cruz Commerce Center industrial park is located adjacent to the Maricopa-Casa Grande Highway and the Southern Pacific Railroad. It currently has more than 50 acres immediately available for lease in shovel-ready lots ranging from 1.2 acres and up, and it recently began offering a build-to-suit option for qualified tenants. The Mesquite Building office complex was built and leased in less than a year, and plans call for a similar building to be constructed by 2013.

Charles Carlyle, an Ak-Chin member who serves as chair of the Industrial Park Board, says the Community is changing with the times. He's lived in the area for all of his 60 years, working in a variety of industries and leadership positions. Just as the farms that originally kept the reservation from its initially designated size ended up selling land to developers, he says the Community too is seeking to diversify from its ag base — and use strategically chosen land parcels to do it.

One in particular is the Airport. Carlyle says a Phoenix developer who deals with real estate surrounding airports called Ak-Chin Regional Airport "a gold mine," especially as so many cities across the nation overlook smaller airports instead of realizing their full potential.

Based in part on new marketing, the Community saw nearly a dozen inquiries from businesses in the first two months of 2012. Carlyle says the Board is focused on attracting more technically advanced fields such as data processing, as well as light industrial. They want green-tech firms that are conscious of conserving water. And they are looking for more firms in the housing construction supply chain.

"We'd love to see some green industrial," says Phil Entz, property manager of Santa Cruz Commerce Center, "not just solar, but hydroponics and biomass, that can play off the surrounding ag uses." Meanwhile, "because the rumor mill has been going about Airport improvements, I'm already receiving unsolicited calls from people interested in locating there or using the Airport as a base of operations."

The Community has prepared two fee-to-trust applications to the Department of Interior (DOI), Bureau of Indian Affairs (BIA) that include the property boundaries of Ak-Chin Southern Dunes Golf Club tract and the Bunger property/airport tract. "The two tracts being incorporated into trust status would offer tremendous opportunity to enhance current and future economic initiatives," says the Community.

The potential for nearly 1,000 acres of Ak-Chin properties to be placed in federal trust status and therefore come off surrounding jurisdictions' tax rolls has provoked some concerns among officials in those territories. But Ak-Chin leaders have earned recent praise for how they work with developers and neighbors alike.

In 2008, the Honoring Nations program of the Harvard Project on American Indian Economic Development recognized the Ak-Chin Indian Community's Community Council Task Force for its work on dealing with suburban encroachment on land adjacent to the Reservation. "Developers, as well as city and county officials know who they should talk to and what to expect," said the citation. "Task Force reviews are professional, consistent and fair, with set procedures and timelines. Through its professionalism, the Task Force demonstrates to non-Native corporations and governments that the Community can develop a constructive, official position on permit applications."

"The City [of Maricopa] is looking at losing tax base," says Ak-Chin Industrial Park Board Chair Charles Carlyle of the fee-to-trust applications, "but I see it as gaining sales tax: People from here go into Maricopa. We have supporters from not only this area but also Casa Grande. We're in the process right now of looking at all the pros and cons."

As the Honoring Nations award citation said, "Ak-Chin is an essential player; it will not be overlooked in the future."

The Ak-Chin Indian Community knows a thing or two about fruitful cultivation, as seasonal farming along the Vekol Wash is their heritage. More organized farming helped the Tribe find itself, as, stoked by a desire to form a farm enterprise, its leaders established an identity, bylaws and council that were officially recognized by the U.S. Bureau of Indian Affairs in 1961. The success also meant Community members were able to work on the Reservation instead of travelling off site for gainful employment.

"I guess the farming is my baby," says Leona Kakar, whose surname echoes the name of the Ak-Chin people's ancestral village. Kakar, 76, is a Community elder who formerly served as the chair of the Community Council and currently serves as the chair of Ak-Chin Farms. She remembers the days when "there was nothing but poverty," and a sense of communal purpose and goodwill fueled everything from the groceries where she worked to the backyard gardens that fed families such foods as cured cholla buds and mesquite beans.

Ak-Chin Farms currently harvests over 15,000 acres, making it one of the largest farming communities in the U.S.

The BIA told the Community in 1961 it would not use tribal trust funds to support its attempt at farming. Times were hard and the work was done with borrowed equipment and handshake agreements. "We would put the bills in a hat, roll it around, and whichever one we picked would be the bill we paid that month," laughs Kakar. When the Farm realized its first profit of $3,000 a couple years later, she says, the BIA was ready to take credit for the success. "I said, 'Let them have the glory,' " says Kakar, " 'as long as we have the Farm.' "

The farm business was aided by a 1984 water settlement declaring that the Community was entitled to 75,000 acre-feet of Colorado River water. Its continuing success brought visits from indigenous tribes all over the world, seeking to learn from Ak-Chin success.

"Ak-Chin has been instrumental in our growth and expansion in Maricopa," says Glenn Hickman, president of Hickman's. "They continually team with us to find business solutions that are mutually beneficial."

The Farms have a potato growing contract with Frito-Lay's LEED-Gold plant in nearby Casa Grande. But today the main focus is on silage crops to feed cattle at nearby dairy operations, which, notes Kakar, "moved out of the cities because of the housing growth."

Indeed, it is the residential growth in the Phoenix metro area that has in part driven Ak-Chin enterprise and success. Maricopa County's population grew by more than 24 percent between 2000 and 2010 to more than 3.8 million. Meanwhile Pinal County's population surged by 109 percent over that period, to nearly 376,000. Between 2004 and 2007, 21 new subdivisions were proposed for a projected 130,000 new residents in the county.

Harrah's Ak-Chin Casino opened in 1994 — "they took our hayfield and planted a casino in it, and it's been a lot more profitable," Kakar jokes. According to a 2011 study, Harrah's Ak-Chin Casino Resort is the largest contributor to the Pinal County economy, accounting for nearly 1,100 jobs and generating more than $205.3 million in economic activity in 2010. And that does not take into account a brand new 152-room hotel tower.

The Casino expanded in 2010, the same year the Ak-Chin Indian Community purchased Southern Dunes Golf Club, which, like the Casino, is managed by an external partner, the world-renowned Troon Golf, which runs over 200 high-end properties all over the world.

"I can't imagine a better ownership community to work with," says Ak-Chin Southern Dunes General Manager Garrett Wallace, citing the Community's willingness to listen to Troon's expertise. Wallace says from day one Ak-Chin Chairman Louis Manuel, Jr., has said he wants the course to be the best in Arizona. A five-year plan is in motion, and "not a month goes by that we don't do something to make the golf course better," says Wallace. "It's a fantastic experience as a manager and operator."

The club is just beginning to scratch the surface in the corporate meetings arena. And a new GPS-based information system in the golf carts will link promotions among various Ak-Chin properties. That sort of cross-pollination reflects the teamwork within the Ak-Chin governmental structure.

"There's a great amount of ease in the way the departments work with each other," says Phil Entz, "which makes some of the most complex projects quite a bit easier."

Fiscal solvency inside the Community means its leaders can devote more attention to the fiscal success of its business partners. As Leona Kakar puts it, "Now we have no problems paying bills."

"Gaming revenues have allowed the Community to make significant investments in the area," says Jerry Owen, planning and development director for the Community, including a new fire station, a state-of-the-art water reclamation facility and a major surface water treatment plant now under construction. In addition, as part of the move of properties toward trust status, he says utility and drainage studies are under way, all to be incorporated into an airport master plan and a land use master plan.

"To me the beauty of Ak-Chin is it's a relatively small Community, united in terms of its vision and what it wants to accomplish," says Owen, who calls the ability to acquire ancestral lands important and a motivation. "We have a very proactive Council, seizing the opportunity to set the Community on a successful and sustainable path to the future."

This Investment Profile was prepared under the auspices of the Ak-Chin Industrial Park Board. For more information, contact Phil Entz at (602) 568-3246 or visit www.leaseakchin.com. 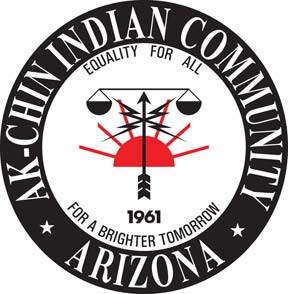 The official seal of the Ak-Chin Indian Community 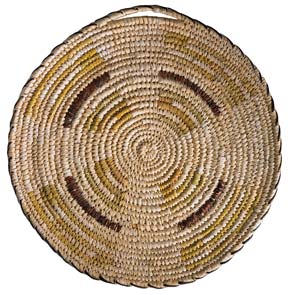 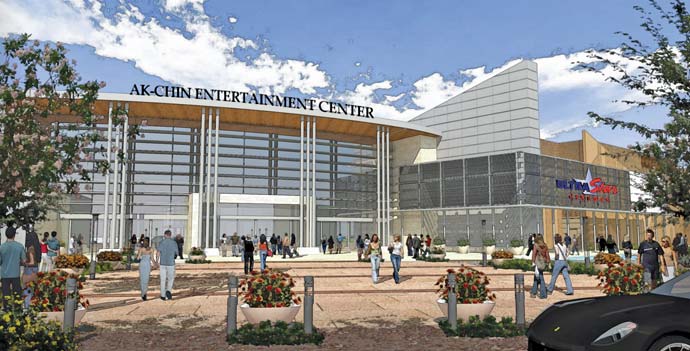 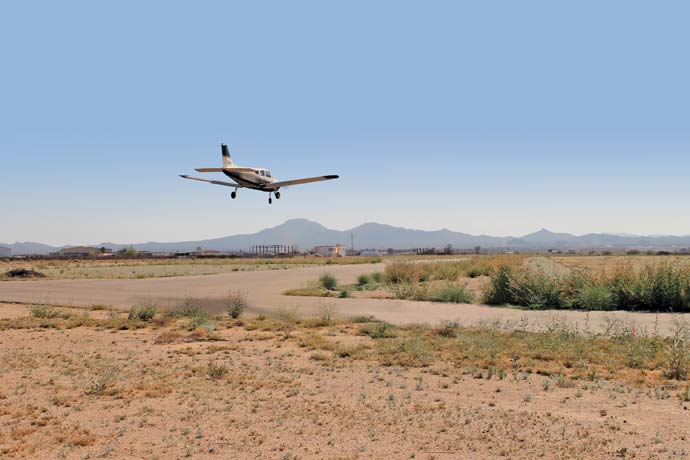 The Ak-Chin Industrial Park Board, established in 2005, facilitates the processes for planning and zoning, architecture and construction, and building permitting and signage within the Community on behalf of the tenant. The advantages of operating on tribal land include below-market lease rates, lower tax costs and reduced energy expenses.

Ak-Chin Water & Sewer offers rates approximately 15 to 20 percent below City of Maricopa rates. Power rates from Ak-Chin Energy Services are typically 20 to 27 percent lower than rates of surrounding utilities. Ak-Chin does not charge for trash services, and provides its own public safety services including fire and police. Among the advantages of leasing on tribal land: