A shifting labor landscape remains favorable enough in Kentucky for its
auto manufacturers to invest in new operations; a new Louisville center caters to
do-it-yourself distillers, extending the reach of a signature industry sector. 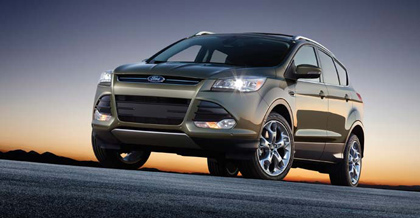 Ford Motor Corp. is building its 2013 Escape at its Louisville Assembly Plant, which is completing a $600-million expansion.
M

ost buyers of Ford Motor Co.'s 2013 Escape won't know specifically where their new mini-SUV was made. But, in fact, they will have Louisville labor and a labor-friendly Kentucky business climate to thank for their ride. As reported in the May 2011 issue, Ford invested $600 million in late 2010 in its Louisville Assembly Plant (LAP), one of three North American body-on-frame truck plants it's retooling to enable production of fuel-efficient products from its global vehicle platforms. The project is adding 1,800 jobs to the 1,100 already in place.

More recently, Ford announced in October 2011 that a new, national labor agreement had been ratified by UAW-represented employees in the U.S., covering 41,000 employees including those at the Louisville plant and three others where production shifts are being added. LAP is increasing its operations to two shifts and significantly enhancing the facility's productivity. Reprogrammable tooling in the body shop will allow the plant to produce multiple vehicle models at the same time without requiring downtime for tooling changeover, making the Louisville operation Ford's most flexible, high-volume plant in the world. LAP can build up to six different vehicles at the same time, allowing Ford to meet demand more quickly in the event customer preferences shift due to changing economic conditions — a hallmark of the past several years and for the foreseeable future.

"I took office in December 2007, and the recession in Kentucky started at about that time," Gov. Steve Beshear tells Site Selection. "In many places, folks decided to hunker down and wait it out. We decided to become more aggressive in our job creation efforts. In 2009, for example, we completely revised our economic incentives programs. Our toolbox had gotten a little rusty. We gave ourselves maximum flexibility to work with existing business as well as new business we could attract to Kentucky. That paid off handsomely for us, because we are coming out of that recession a lot faster and a lot better off than a lot of states around the country."

Kentucky ranked eighth on Site Selection's Governor's Cup ranking, and the Ford project cited above was a Top Deal for 2010, as reported in the May 2011 issue.

The Bluegrass State is climbing in other rankings, too, including Forbes' ranking of the best states in which to do business. Other measures point to room for improvement, such as the Pew Center on the States' report, "Evidence Counts: Evaluating State Tax Incentives for Jobs and Growth," released in April, which puts Kentucky in the "Mixed Results" category along with 11 other states — including Virginia, which is Site Selection's Top Competitive State for 2011.

The point is Kentucky is improving by most measures, and Gov. Beshear intends to keep his state's industrial — particularly automotive — base healthy. Two Ford plants, a Toyota plant in Georgetown and GM's Bowling Green factory for Corvette production are just part of a sector that is home to scores of suppliers, as well.

"We knew we were a leading state in the auto industry, but 10 years from now we still want to be," says the governor, "and that industry is changing dramatically, especially in how the vehicles are powered. We want to make sure we're making the cars of the future here in Kentucky." The Kentucky-Argonne Battery Manufacturing Research and Development Center, a partnership of the Commonwealth, the Argonne National Lab in Chicago and the Universities of Kentucky and Louisville, will further that cause, as a leading center of lithium ion battery commercialization. Hitachi is bringing more battery development work to Kentucky, too, notes the governor.

Meanwhile, his state's competitive landscape shifted somewhat in February 2012 when one of his northern neighbors, Indiana with its own share of automotive industry manufacturers, suppliers and R&D players, jumped the labor fence to the right-to-work side. No matter, says the governor.

"There are some companies who look at right-to-work as something they must have in order to look at a state, but I think there are very few companies like that," he says. "In Kentucky, we strive to get our foot in the door, because if companies come and look at us they will find a very favorable labor climate. Ford is unionized, and they're prospering. Others, like Toyota, are not unionized, and they are prospering. It's a very stable labor environment, and companies that look at that in detail quickly become very comfortable about locating here."

ouisville has long been home to the U.S. distilling industry, but now there's another reason to visit the heart of bourbon country — especially for those seeking to learn how to make their own. Moonshine University is part of the new Distilled Spirits Epicenter, along with the Grease Monkey Distillery and Challenge Bottling operation, that opened in early April in downtown Louisville. It offers courses in product development, packaging, marketing, safety and other areas of interest to the growing market of craft, or artisan, distillers.

Grease Monkey Distillery, in a renovated mechanic's garage, is a teaching facility and equipment provider for distillers needing cookers, fermenters and stills for small-batch runs. The bottling operation completes the distillery process with bottling services for custom runs.

The Distilled Spirits Epicenter was conceived by David Dafoe, founder of Flavorman, a 20-year-old beverage development company based in Louisville, explains Kevin Hall, operations manager. "David recognized that the craft-distilling movement, much like the craft brewing movement 20 years earlier, was really beginning to take hold. In 2006 there were 143 federal licenses for distilled spirits plants in the U.S. Today there are over 700," notes Hall. "This tremendous growth was not, however, being supported by educational resources where would-be distillers could learn the art, science and business end of the distilling industry."

Louisville — and Kentucky — are at the center of the distilling industry in the United States; every major distilled spirits manufacturer has a plant within 50 miles (80 km.) of Louisville, Hall points out. (Wild Turkey brand owner Gruppo Campari broke ground on March 29 on a new, $44-million, 125,000-sq.-ft./11,600-sq.-m. packaging facility at its distillery in Lawrenceburg, closer to Lexington, but illustrating Hall's point, creating 62 new jobs.)

"There is no place else in the country with access to those kinds of resources," Hall relates. "The mission, then, was to make Louisville the 'epicenter' of the craft distilling movement. To do that, one has to have a distillery. As it happens, the premier manufacturer of distillery equipment in the United States is also located in Louisville." Vendome Copper and Brass Works is a 100-year-old, fourth-generation, family-owned business. "Their equipment is beautiful, but their machine shop is no show place. They needed a space to showcase their stills, and Epicenter needed distilling equipment. It was a perfect match."

Epicenter is working with Jefferson Community and Technical College to certify its curriculum. "This assurance of academic rigor in the programming will prove attractive to companies incurring the expense to attend the classes," says Hall. "It is also a step toward developing an accredited program for Master Distillers, a term which today can be used by anyone with a still and a business card. Accreditation would be a step in the right direction for one of Kentucky's signature industries."

Distilled Spirits Epicenter is also working with the Kentucky Distillers' Association and state and local economic development officials to make Kentucky more attractive to craft distillers from a tax and regulatory perspective, says Hall. "Recent laws passed in the Pacific Northwest have eased barriers to entry in this growing industry. Given Kentucky's rich distilling history, similar easing of these barriers would make it a natural fit for anyone interested in opening a craft distillery."