In this file photo, engineering researcher Aimee Bross worked on field-emission tests for SEM equipment at the Nanotech West facility on the campus of The Ohio State University. The school led all public universities in business-funded R&D for FY2010.
U

niversity spending on R&D in all fields increased 6.9 percent between FY2009 and FY 2010 to US$61.2 billion, according to FY 2010 data released in March from the National Science Foundation (NSF) Higher Education Research and Development (HERD) Survey.

The increase was due in large part to the $2.7 billion in reported expenditures funded by the one-time American Recovery and Reinvestment Act of 2009 (ARRA), said the NSF. As a result of ARRA, the percentage of academic R&D funded by the federal government rose to 61 percent in FY 2010, constituting $37.5 billion of the $61.2 billion total.

Among the 10 broad fields for which data were collected, life sciences account for the largest share by far ($34.9 billion of the $61.2 billion total). Engineering was the next largest broad field with $9.3 billion in reported R&D expenditures. Among subfields, medical sciences continued to hold the largest share of the total (31 percent or $19.2 billion in FY 2010).

Fields seeing the most dramatic percentage-point increases in R&D funding from FY2009 were led by communications, journalism and library science (46.7 percent, to $157 million), followed by 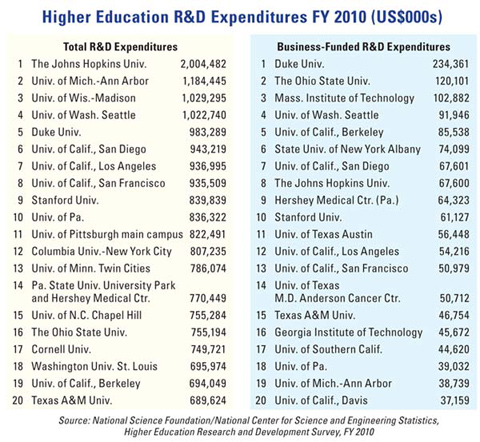 Of the 742 institutions surveyed, the top 25 in terms of R&D expenditures in all fields accounted for 35 percent of total academic R&D spending. Yale University and Georgia Institute of Technology were new additions to the top 25 in 2010, ranked 24 and 25, respectively.

Of the approximately $3.2 billion in university R&D funded by business, 40 percent (or $1.28 billion) was in the medical sciences field. The next most-funded fields by the business community were engineering ($821 million), biological sciences ($326 million), agricultural sciences ($136 million) and environmental sciences ($128 million). "The Southeast is an untapped region for MindTree from a talent and client acquisition standpoint. Setting up our first major U.S. development center in Florida gives us a foothold into this region," said Scott Staples, president, Americas, noting the area's IT and engineering talent, quality of life and, perhaps most important, its university. MindTree will be investing nearly $3 million to renovate and repurpose an existing structure located across from the Florida Innovation Hub at UF (pictured) at Innovation Square, providing the company close access to the University of Florida's Engineering and Computer Science programs.

The Gainesville Area Chamber of Commerce and the Council for Economic Outreach worked with local and state partners including representatives from the University of Florida, Santa Fe College, the Alachua County School Board and Enterprise Florida.

MindTree is a member of The National Association of Software and Services Companies (NASSCOM), a not-for-profit industry association for the IT-BPO Sector in India. Five days previous to the project announcement, NASSCOM released a new report called "India's Tech Industry in the US." Among its findings: India-based IT and BPO firms doubled the number of jobs for locals in the U.S. in the last five years to nearly 107,000. Moreover, said NASSCOM, the companies have invested more than US$5 billion through 128 acquisitions in the U.S., and have contributed over $15 billion towards the U.S. Treasury in the past five years.

"These companies have increased their investments in the U.S. local centers by increasing the number of seats by nearly 10 times in the last five years," said the report. "The total seats are expected to grow by 50 percent in the next five years. California, Texas, New Jersey, Illinois, Michigan and New York account for 50 percent of the direct employment supported by the industry."

In early April news emerged that India is in consultations with the U.S. at the World Trade Organization challenging a nearly 100-percent hike in the fee — to $4,500 — for U.S. work visas for employees of India-based IT-BPO firms.

A week before MindTree's announcement, Brazil-based aircraft manufacturer Embraer, which maintains Florida facilities in Ft. Lauderdale and in Melbourne, announced it will be adding a new R&D facility at Melbourne International Airport — the Embraer Engineering and Technology Center USA. The project will create 200 new engineering jobs with average salaries of $70,000, with at least 40 new jobs anticipated in 2012.

The new center will be housed in a 67,000-sq.-ft. (6,224-sq.-m.) facility to be constructed on the site of the current Embraer Executive Jets Division Headquarters and final assembly building, which began operations in February 2011. Embraer dedicated its global Embraer Executive Jets Customer Center in December 2011, rounding out the company's $50-million investment in the Space Coast to date. The company plans to break ground on the new facility in summer 2012. he city council of Tijuana, Baja Mexico, approved new tax incentives in Nov. 2011. It didn't take long to see them bear fruit, as U.S.-Taiwanese consortium Prime Wheel, a maker of aluminum wheels, which had announced in 2011 it would invest $100 million and create 1,000 jobs at a new facility in the city, was the first recipient of funds from the program.

A check equivalent to US$123,700 was presented to Prime Wheel, representing savings applied to different fiscal obligations for 2012 and 2013, including reductions in land title fees, construction permit fees and fire department fees, and a reimbursement of 30 percent of the property acquisition tax (ISABI).

Other projects to land in Tijuana in recent weeks include a $7-million steel supply center from Ryerson, which hopes to employ 50 at the site within three years.

Those companies include Samsung, Greatbatch, Foxconn, Energy Labs, Avery Dennison and Fisher & Paykel, all of which received federal and state government incentives to support their projects.