Projects in and near Providence bolster the region’s growth prospects. 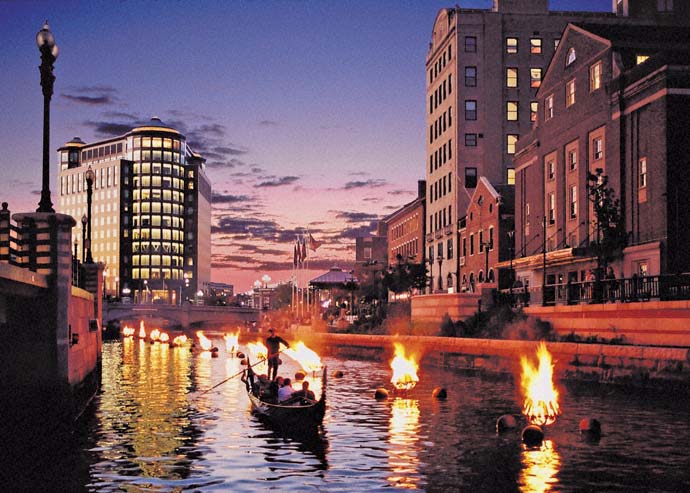 The City of Providence, boosted in part by the relocation of I-195, is seeing project activity from the digital media sector, and is looking to see more from the life sciences sector.
by JOHN W. McCURRY
W 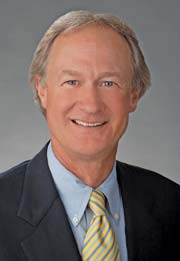 arwick, R.I., might not be as well known as Providence, its neighbor 10 miles (16 km.) to the north, but it is starting to get attention for its new intermodal hub at the Warwick Station Development District near T.F. Green Airport.

The city has a master plan calling for 1.5 million sq. ft. (139,350 sq. m.) of mixed-use development on 95 acres (39 hectares) around the airport and a new Interlink intermodal train station which connects the airport to Providence via commuter rail. Rail service to Providence and Boston began in December 2010 and was expanded a year later.

Now, the city is seeking to develop land around the station with office space, hotels, retail and entertainment projects, housing and light manufacturing. There is also the potential for an additional 1 million to 2 million sq. ft. (92,900 to 185,800 sq. m.) of office and hotel development in the area.

One of the big proponents of Warwick Station Development District is Rhode Island Governor Lincoln Chafee, who sought funding for the $267-million Interlink project while mayor of Warwick and later as a U.S. senator. Chafee was mayor of Warwick for most of the 1990s, so he is naturally excited about the project. 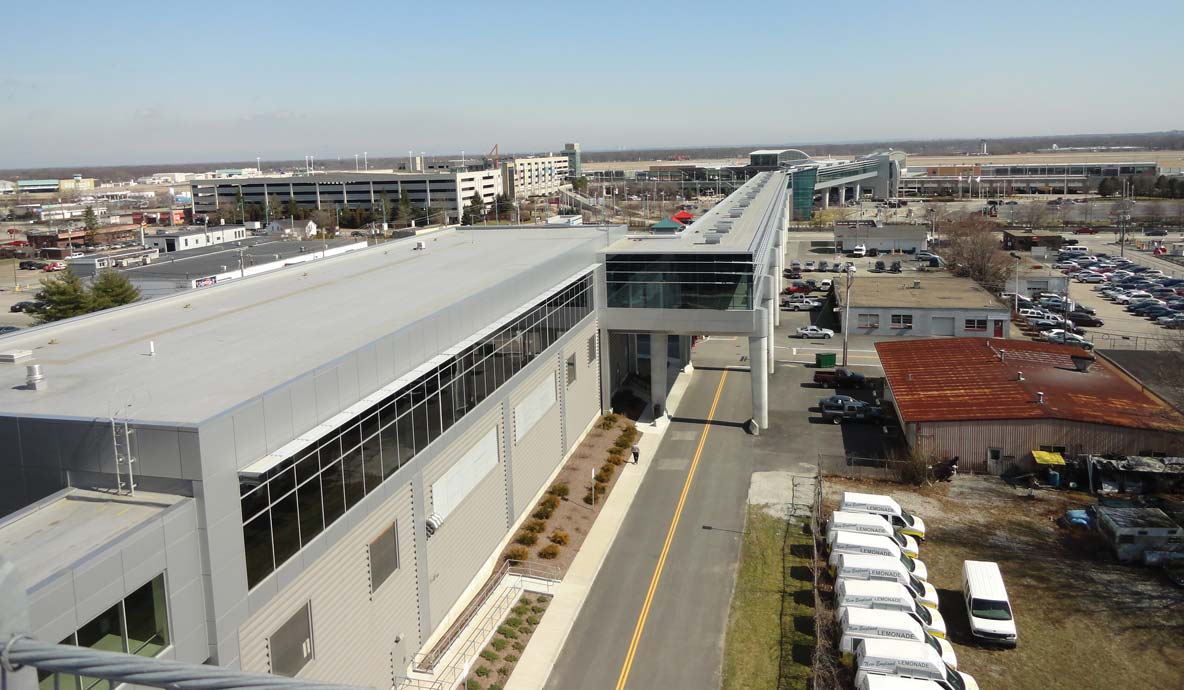 As of Nov. 2011, 20 commuter trains a day connect T.F. Green Airport in Warwick, R.I., to Providence and Boston via the recently opened InterLink.
Photo courtesy of RIEDC

"It will be a great asset for economic growth as we move forward," Chafee says. "There is some very underutilized real estate in the area. There is a lot of potential for meeting space around the airport such as they have around O'Hare in Chicago. This is going to take off."

Providence's Knowledge District, an area that includes what has been known as the Jewelry District plus land gained by the relocation of I-195, has quickly gained a toehold in the digital media sector with two high-profile projects. Both companies leased buildings formerly occupied by Blue Cross of Rhode Island. 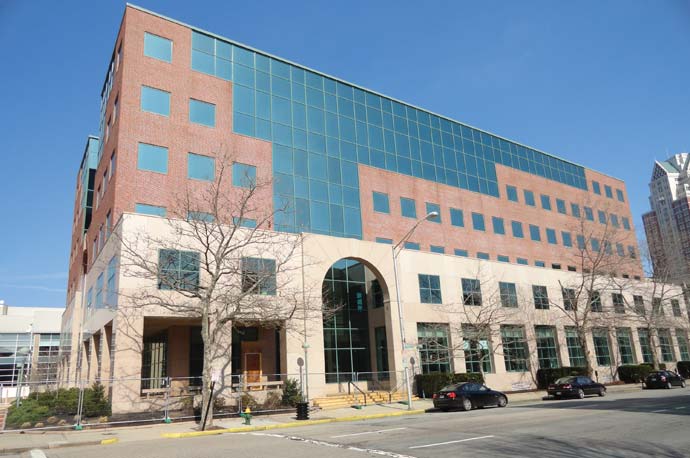 Hasbro and 38 Studios are the anchors of Providence’s burgeoning digital media cluster in what is known as the city’s Knowledge District.
Photo by John W. McCurry

The first to arrive was 38 Studios, which moved from Maynard, Mass., in 2011. The company, founded by former Boston Red Sox pitcher Curt Schilling, received a $75-million loan from the state and has a goal of eventually employing 450. Formed in 2006, the company released its first video game in February.

Last summer, Pawtucket-based Hasbro announced it would invest $24 million in its expansion in a building located around the corner from 38 Studios. Hasbro plans to create at least 284 and as many as 500 jobs over the next several years.

Redevelopment of land made available by the relocation of I-195 is giving the city a rare opportunity to develop more than 20 acres (8 hectares) of property.

"When the highway started coming down in earnest, people started realizing we had this extraordinary opportunity," says Colin Kane, chairman of the I-195 redevelopment commission. He describes the commission as land developers with broad permitting authority to provide a "one-stop shop" for developers or land buyers. The commission is charged with maximizing the land's use.

The Quonset Business Park, located on the site of former Quonset Naval Air Station site, which was deactivated in 1974, has had considerable success. It is home to 168 companies which employ 8,800. The Quonset Development Corp. and the Town of North Kingston have streamlined the regulatory and permitting process to the point that companies can put shovels in the ground within 90 days. The state plans to use the QDC initiative as a model for a larger statewide "Rhode Island-Ready" demonstration project being developed by the RIEDC's Office of Regulatory Reform.

"We want to make every parcel as pad-ready as possible," says Steven King, QDC's managing director. Quonset's largest employer is submarine builder Electric Boat, a subsidiary of General Dynamics. The company recently completed a 148,000-sq.-ft. (13,749-sq.-m.) expansion and plans to add 500 jobs within the next two years to its work force of 2,300. The company's facility now encompasses about 1.62 million sq. ft. (150,498 sq. m.). 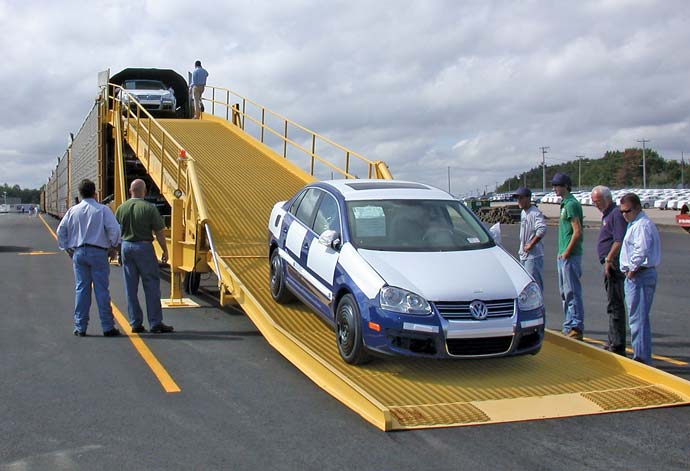 The park's Port of Davisville became the 7th largest auto importer in North America in 2011 when more than 150,000 autos, mostly from Germany, came through the port. Most vehicles arriving at Quonset Business Park are processed, finished and distributed across the country by North Atlantic Distribution, Inc. (NORAD), a Quonset tenant company.

Quonset is also home to Rhode Island's largest solar farm, located on the campus of Toray Plastics America. The $2-million photovoltaic array was completed last August and helps the company offset electricity costs. Toray, which specializes in manufacturing materials such as plastic packaging for potato chip bags, is the state's largest user of electricity.

Quonset is slated to be the staging area for what would be the nation's first offshore wind farm, Deepwater Wind, planned for 3 miles (4.8 km.) southeast of Block Island, which is about 13 miles (21 km.) off the coast of Rhode Island. Deepwater plans to use five Siemens 6-MW wind turbines for the project. Construction will begin in 2013 if the project achieves required permitting. The project also includes a transmission cable connecting the island to the mainland grid for the first time. National Grid has agreed to buy all of the output from the project under a 20-year power purchase agreement.

Athletic shoe maker New Balance recently unveiled plans for its new world headquarters in Boston. The 250,000-sq.-ft. (23,225-sq.-m.) headquarters building will be part of a larger development which will include a sports complex, retail shop, restaurants and a hotel on a 14-acre (5.7-hectare) site in the Allston-Brighton area of the city. 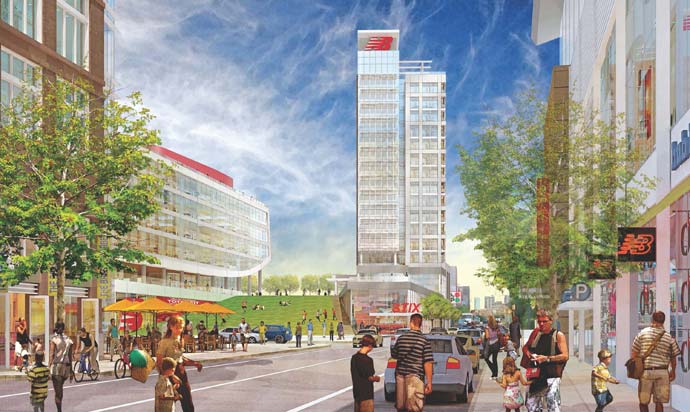 New Balance’s headquarters will be the centerpiece of a new development in Boston’s Allston-Brighton section.
Image courtesy of New Balance

New Brighton Landing, developer of the project and a sub-entity of New Balance, submitted the master plan for the development.

"The Master Plan provides an overall development concept for the 13.9 acres [5.6 hectares] of land where we seek to create Boston's 'health and wellness district' with an assortment of retail, office and sports/fitness related uses, anchored by a new world headquarters for New Balance and a premier sports complex," says Matt LeBretton, New Balance director of public affairs. "As an Allston-Brighton business community member for 36 years, we support thoughtful development that benefits the community through job creation, public open spaces and overall infrastructure improvements. We actively participated in the Brighton Guest Street Planning Study, hosted by the Boston Redevelopment Authority, and will continue to work closely with the BRA, the City of Boston and the local community to ensure the development and the energy it creates is beneficial to area residents and businesses, current and future employees, and the City of Boston."

New Balance still manufactures 25 percent of its shoes in the U.S. Most of that U.S. manufacturing is done in Maine at factories in Norridgewock, Skowhegan and Norway where it employs a total of about 800 people. The company recently added 60 jobs at these three facilities.

Those jobs could be in jeopardy pending the outcome of ongoing Trans-Pacific Partnership agreement (TPP) negotiations. At issue are tariffs on shoes made in Vietnam, which has become a major shoe-manufacturing center. U.S. Sen. Olympia Snow of Maine recently toured the company's plant in Norridgewock to draw attention to the issue.

Green Mountain Coffee Roasters (GMCR) has major expansions project in the works for its facilities in Essex, Waterbury and Williston, Vt., plus a new location planned for South Burlington.

Green Mountain Coffee Roasters is expanding several facilities in Vermont including manufacturing operations in Essex.
Photo courtesy of Green Mountain Coffee Roasters
"As a proud and long-time corporate citizen of Vermont, we are always pleased to share news of our continued expansion. Vermont has instilled in GMCR many of the values that have guided our company from a small coffee retailer on the Waitsfield village green to one reinventing how North America prepares coffee and other beverages both at home and away from home," said Lawrence J. Blanford, president and CEO of GMCR, last fall. "As we look to support the continued growth in our business, we expect to lease additional office space, build-out new facilities and hire new employees in multiple communities across Vermont. With these expansion plans, we could increase our Vermont employee base by 30 percent over the next 12 to 18 months."

In Waterbury, where the company currently occupies 12 buildings, it recently completed a 75,000-sq.-ft. (6,968-sq.-m.) expansion of its manufacturing facility. The project was designed to accommodate increased packaging capabilities, expand the current coffee tasting and quality control lab and provide office space for the company's Specialty Coffee business unit.

The company also occupied a 35,000-sq.-ft. (3,250-sq.-m.) building on 53 acres (22 hectares) purchased in Waterbury Center. GMCR expects to renovate the existing facility, which will house its new beverage research and development efforts as well as other support functions.

In Essex, the company plans a major capacity expansion at its existing production facility. This includes a 240,000-sq.-ft. (22,296-sq.-m) addition that is expected to be completed this summer. The expanded facility will accommodate new coffee roasting, grinding, flavoring and packaging capacity.

In Williston, GMCR is converting a portion of its existing 228,000 sq. ft. (21,181 sq. m.) of existing space to accommodate additional packaging capabilities. The company is also leasing additional space in the area for its kitting and special packing capabilities.

Also expanding is King Arthur Flour in Norwich, which completed a $15-million project that will add 70 to 120 jobs over the next five years. And Commonwealth Daily built a new yogurt production facility in Brattleboro. A joint venture between Ehrmann USA and Commonwealth Yogurt, the plant employs 65.

Safran USA plans to build a $100-million, 275,000-sq.-ft. (25,547-sq.-m.) facility in Rochester, N.H. The company will co-locate with Albany Engineered Composites, a subsidiary of Albany International. The new facility will manufacture composite aircraft engine components and will employ 400.

"We are very pleased to launch the construction of a manufacturing plant in Rochester, where the Safran group and AEC will combine their resources in order to produce advanced composite parts for the LEAP aircraft engines developed by CFM International, a 50/50 joint company between Safran and GE," said Peter Lengyel, president and CEO of Safran USA's Washington D.C. Operations.

Pitney Bowes has opened a Global Technology Center in Danbury, Conn. The company says the newly renovated 300,000-sq.-ft. (27,870-sq.-m.) facility will support its continued evolution into customer communications management to help businesses grow by building customer loyalty and increasing profitability through highly-personalized communications. The company is moving 170 jobs from its Shelton, Conn., facility. 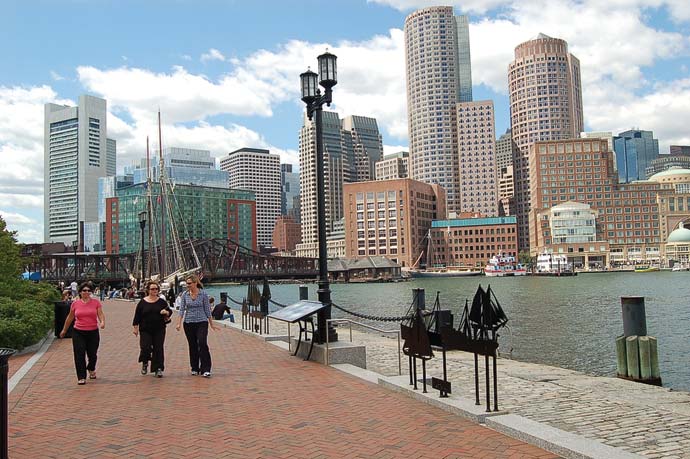 Boston’s waterfront continues to reflect the robust development profile of the city itself. As of late March there were $3 billion worth of projects under construction in the city, which has attracted more than 100 companies and 3,000 new jobs to its waterfront Innovation District since January 2010.
Photo courtesy of Greater Boston Convention & Visitors Bureau