No need to sell these senior IT executives on Québec’s location advantages.
They’re writing the book on that. 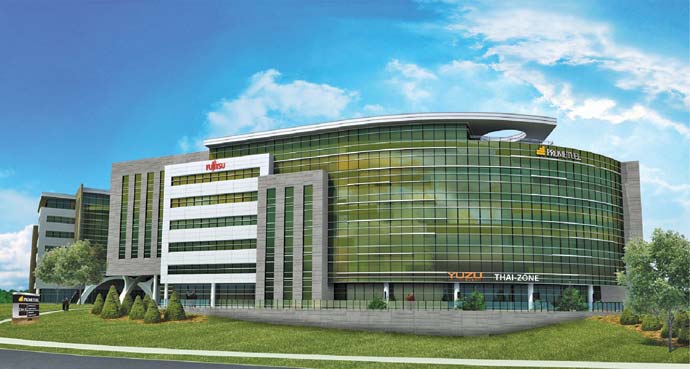 uébec-based IT executives at multinational computer services giants attribute the success and expansion of their enterprises to being located in Québec. An increasingly bilingual and skilled work force, higher education resources, proximity to Europe and the U.S. Northeast and a business climate that encourages capital investment are some of the assets they identify as drivers of their ability to compete. More specifically, they compete successfully with other subsidiaries of their parent companies worldwide for capital investment, or they complement those subsidiaries as no other operation can, they maintain.

Fujitsu Canada is a case in point.

"I was recently selected to be the North American representative of a corporate leadership program in which I had to present a business practice plan to the Fujitsu board of directors," relates Christian Giroux, executive vice president, Eastern Canada at Fujitsu Canada. "The plan involved roughly C$100 million worth of investment. That's very significant here, and it's why it became important to explain why Fujitsu should invest here instead of elsewhere. Why would the investment be made here instead of Atlanta or somewhere else? That's where the advantage of Québec City became central to this process."

Giroux had built the Québec City operation, which specializes in IT consulting to large clients, including the Québec provincial government, from 400 employees in 2005 to nearly 1,100 today. (In 1997, Fujitsu acquired Montreal-based DMR, founded in 1973, which later became Fujitsu Canada.)

"A few years ago, we were looking at our strategy and realized we had reached a plateau of what DMR could become in town, and I wanted to use the footprint of Fujitsu here to grow. That would be the occasion for us to change names, even though they didn't need us to — it was us looking at our market and the need to offer more services from Fujitsu beyond what we had been doing as DMR over the last three decades."

Giroux's plan called for the Tokyo-based multinational IT equipment and services giant to invest $100 million in the Québec unit, the first phase of which was approved and announced in November 2011, involving a $20-million investment — $14 million from Fujitsu and $6 million from Québec's Ministry of Economic Development, Innovation and Exports.

The centerpiece of the first phase is the Fujitsu Innovation Center, a collaborative space where business partners and customers are invited to work with Fujitsu specialists to put new ideas into practice and build innovative business solutions. "The work there is different from that of an R&D center," says Giroux. "It starts where research ends. The work involves prototyping or demonstrations." Fujitsu estimates that it will develop some 20 initiatives in cooperation with about 10 partners in its innovation center by March 2014.

The Fujitsu Innovation Center also gives Québec City businesses access to Fujitsu's products and technologies available worldwide, its experts' know-how, especially in the area of cloud computing and green IT, the expertise of its major global partners and collaborators and the capacity of its data centers and laboratories, where it invests $2.7 billion each year in R&D. "One of my goals is to connect to that and bring that here. The Fujitsu Innovation Center is our link to that so we can have a share," says Giroux.

How Did Québec City Win the Project?

"At the end of the day, the board didn't ask questions about the project, but rather about Québec City. I was selling Québec City as the place for their investment — that is my experience. The Japanese are very keen on the notion of the smart city, communities that are linked together. I presented the idea of the Fujitsu Innovation Center being a key element here to help us become a smarter city. The support I garnered here was linked to that concept."

Québec City is a close-knit community, Giroux explains, and it rallied behind the notion of Fujitsu establishing the Innovation Center there rather than in another location. "When the community supports the project, it is very significant. There is the support if the universities, the business community, the mayor — they all supported this investment. The community welcomes innovation and supports projects that attract investment here. If the goal is to create added value in the community and more quality jobs, then the community will support you. Without the assets I was able to present, I am not sure I would have been able to conclude the first phase of this investment." Giroux says plans are getting under way to replicate the Center at an undetermined location in the U.S. and at a second Canadian site.

Meanwhile, IBM is expanding its Québec footprint near its already sizable manufacturing campus in Bromont, east of Montreal. IBM, Teledyne DALSA Semiconductor, the University of Sherbrooke and the federal and Québec governments are the partners behind the C2MI (MiQro Innovation Collaborative Centre) research facility, also in Bromont, that provides space for these entities to conduct R&D on future very-high-tech product offerings. The center was scheduled to open in early May.

IBM's presence in the region is part of the computer services giant's microelectronics property portfolio, which includes facilities in Burlington, Vt., for silicon testing and East Fishkill, N.Y., where semiconductor wafers are made.

"The Bromont facility is the logical extension and finishing operation for one value chain that incorporates these three facilities," says Raymond Leduc, director, Bromont manufacturing. "We run these facilities like one factory, although we are geographically separate. It's one entity, which is in keeping with IBM's approach of being a global company."

The 800,000-sq.-ft. (74,320-sq.-m.) Bromont facility handles assembly of components for use in applications ranging from the hand-held device market to games consoles to supercomputers. Provincial economic development agency Investissement Québec's International Subsidiaries Department helped IBM consolidate the games console business in Bromont. And game show Jeopardy's Watson supercomputer included more than 2,200 modules that were assembled and tested at IBM's Bromont plant. "When IBM decides it needs to invest in its microelectronics division for next-generation hardware, we are always part of that equation, meaning Bromont, Burlington and Fishkill," says Leduc.

IBM's Bromont facility is so central to the microelectronics business that support for the C2MI facility was virtually a given. "Bromont's piece of the business is deemed worth investing in for the long haul, and the focus of C2MI will be research and development of applications that will be manufactured at our facility here," in the Bromont Science Park – Microelectronics and Advanced Manufacturing, says Leduc.

IBM's microelectronics division contributes significantly to the company's claim to being the perennial leader in patents filed — about half of Big Blue's more than 6,100 filings in 2011. "It's about a lot of product innovation and equipment innovation and material innovation here," says Leduc. "It's very demanding. We are constantly being asked to develop new applications, processes and tools. But I would much rather be in that kind of stressful environment, where we need to invent on schedule, than to know that we have people in other countries breathing down our necks that can do things that we can do here much cheaper."

Leduc says IBM's investment in people is what sets the Bromont operation apart. The company draws from seven universities in Québec, including the University of Sherbrooke, from which 170 employees were graduated (Leduc considers them "very high-caliber talent"), a community college with an industrial manufacturing technologies degree, the large Montreal metro area and the U.S. just 30 miles (48 km.) away. Just three hours due south of Montreal, in the Albany, N.Y., area is IBM's other major research center for nanotechnology and advanced wafer technology at SUNY Albany (Intel is collaborating with IBM on next-gen, 450-mm. wafer R&D). And it's joint venturing with GLOBALFOUNDRIES, Samsung, Toshiba and other high-tech companies at a major new facility at Luther Forest north of Albany.

"We use what we sell, and we sell what we use," says Leduc. "The recognition early on was that for the Bromont operation to be successful it would have to have an edge, which means that we must have a very strategic and judicious use of IT. We understand the market, and it helps us build better products for that market."

The province plays an important role in fostering companies' success, says Leduc, who refers to Québec as "a very loyal, very strong partner over the years, and the C2MI facility is proof of that." Future applications of games developed at Ubisoft's campus in Québec City and by others will likely be developed and tested at the Bromont location.

"R&D tax credits from the province make Bromont the ideal location to do R&D in our field, and IBM does about $6 billion a year in R&D — it strongly values research and development. We, along with Burlington and Fishkill, will bring to the table a way for IBM to do more of that in a field that is very important to the company. It allows us to get the appropriate mandates and to provide superior value in our segment. It ensures that it will get done here as opposed to somewhere else in the world."