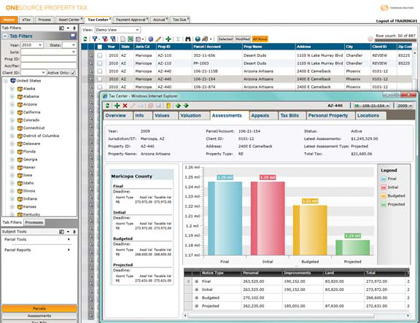 anaging personal property taxes and compliance across multiple states can be an ongoing challenge for large corporations. Nestlé USA has a diverse portfolio of more than 40 manufacturing facilities, distribution centers and office buildings, plus vending equipment, that requires a robust system.

Mike McCrary, manager of property taxes for Nestlé USA (except for the Nestlé Waters division), says the company selected Thomson Reuters' ONESOURCE Property Tax for its ease of use and the level of support offered for the Web-based system. The 2012 filing season is the fifth for which Nestlé has used ONESOURCE. McCrary, who is based in St. Louis, has a staff of two full-time people and three part-timers. He says the company operates in every state that taxes personal property.

"If you are knowledgeable about property taxes, it is very easy to use," McCrary says. "It has a lot of tools and they continually make positive changes to the software and the system. The support center is absolutely phenomenal and they are very good about helping with issues."

Nestlé currently uses ONESOURCE to process returns and check requests. ONESOURCE also does some returns for Nestlé. Updates are a crucial ongoing process due to the continual changes that happen with tax laws across the country.

Which state presents the greatest tax challenge? McCrary submits California, which has many variations on how things are taxed. He says it is difficult to keep up with how depreciation tables are applied.

"If we think there is a better way to do things, we are constantly making suggestions. Thomson Reuters is very good about seeing if they can put them in, and in most cases they can. They do a good job of keeping up with changes," McCrary says. "I'm a big fan of the company and the way they operate. The help desk is great and they are constantly trying to improve the program."

• Intuitive Home Tab for quick and easy access to all the components needed to complete property tax filings.

• Tighter integration of the Asset and Tax Center so users can easily toggle between key functionality for streamlined, uninterrupted return preparation and filing.

• Support of Microsoft SQL so tax professionals can leverage data from other systems for complete and seamless access to all property-tax-related information.

Chip Ferris, senior director of technology solutions for ONESOURCE, says the system was developed 16 years ago. During the first years, the majority of clients were REITs, but the system's scope subsequently broadened to include a wider look at the personal property tax market as ONESOURCE sought to become a player in the corporate sector. Current users are a diverse mix comprising 50 percent retailers, ranging from big-box companies to smaller mall-based companies; 25 percent manufacturing companies; 15 percent in equipment leasing and 10 percent in pure real estate operations such as REITs.

"We think this mix is pretty representative of where we will continue to be," Ferris says.

Updates in the works for ONESOURCE will be geared around workflow, Ferris says. These include site-level information that can be tracked.

"We are pushing work through the system, documents, appeals and ultimately things like the financial aspects of the process. That's a big focus."