Utah In a Laffer 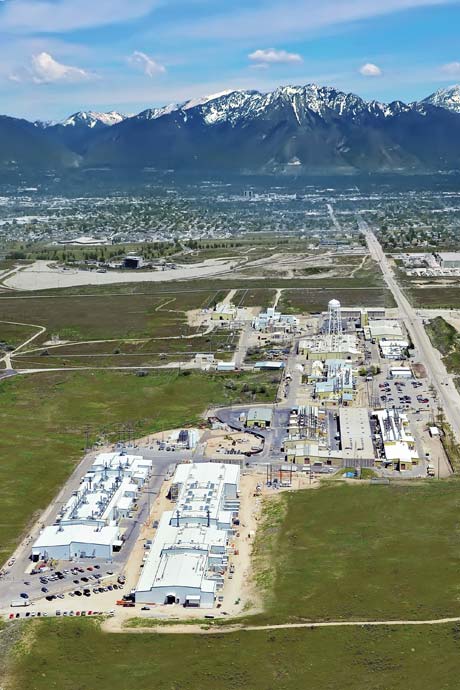 Hexcel Corp. will add 600 new jobs over the next 10 years in West Valley City in Salt Lake County.
Photo courtesy of Hexcel Corp.

lot of companies pay lip service to concepts like teamwork and mentoring. At L-3 Communications, they actually believe enough in those concepts to make them core competencies of their work force. That's a big reason why the firm chose Salt Lake City for a major expansion.

"The state of Utah not only offers the best in outdoor activities. We have also found that the people who live here are very well educated and innovative," says Albert Modrovsky, vice president of strategic initiatives for L-3 Communication Systems Group. "They tend to thrive in an environment of teamwork and are more than willing to mentor other employees by sharing their work experiences and industry expertise."

The company announced in December that it will add up to 500 jobs in the state capital. The firm's Utah division, Communication Systems West, provides network engineering, software integration, hardware manufacturing, and test support services for the defense industry.

"I cannot think of a better place to do business," said Susan D. Opp, president of the company's Utah operation. "Utah has the combination of a skilled, well-educated work force, excellent quality-of-life options, and state and local governments that promote business growth. That is why our operation has continued doing business in Utah for over 50 years."

The study notes that Utah has performed consistently well in this ranking because of its conservative fiscal policy and limited future state pension liabilities, as well as its ability to hold the line on personal and business taxes to remain nationally competitive.

Companies find that kind of environment inviting. "The state continues to do things to make Utah's business environment very pro-business," says Modrovsky. "An example of this is the state's campaign of 'Life Elevated,' along with the strong support of Salt Lake City's Chamber of Commerce, making Utah an attractive place to live, work and run a business."

Incentives were important but not the sole reason L-3 selected Salt Lake City, he adds. "One of the incentives offered to us was a state financial agreement where we would receive financial support from Utah to add additional jobs over the next few years," he says. "This will create a win-win situation for the people who live in Salt Lake City and for us as employers. As our business continues to grow, we are always looking for new talent."

Modrovsky says L-3 considered other locations, but "this new location is closely located with our engineering and manufacturing staff. This location allows us to expand our operations without moving some of our key staff members."

Michael Bacal, communications and investor relations manager for Hexcel Corp., says his firm likes Utah so much that it will add 600 new jobs over the next 10 years in West Valley City in Salt Lake County.

"This is our primary carbon fiber production facility for the entire company," Bacal says. "We use these products in commercial and military applications for aerospace production. The demand for these products will be increasing significantly over the next decade to service the Airbus A350 and other aircraft."

State and local support sealed the deal for this project, he notes. "We have been in Utah for decades. The county and the state have an active economic development program," says Bacal. "They were willing to make investments up front to receive tax payments stretched out over the longer term to get the benefit of increased jobs in the area. They were farsighted in the support they were willing to provide. They understood the benefits of a responsible and growing business, and they understood that there are other places we could have put this business."

The Utah Governor's Office of Economic Development approved a one-time, post-performance refundable tax credit of $7.77 million over the 10-year life of the project.

"Utah's strength in the composite engineering cluster has resulted in industry-leading, world-class companies choosing our state over competitive global cities in Europe and Asia," said Jeff Edwards, president and CEO of the Economic Development Corp. of Utah, who has worked with Hexcel on several expansions over the last two decades.

Bacal notes that Utah "has been a center of excellence for composites. Utah realizes that there is an active marketplace where people want new industry. They recognize that and they are competitive for these projects. We are expanding right now in Alabama too. Carbon fiber plant capacity expansion is a two- to three-year process for each segment you are adding. There are long lead times for these projects."

The quality of the Utah workers was a driver of this decision, he says. "We are obviously very pleased with our Utah work force," Bacal says. "We have been here for over 30 years. The workers here are well educated, and they are willing to commute from outside the area."

Spencer Eccles, executive director of GOED, said that "because of companies like Hexcel choosing to expand and relocate in Utah, the next decade will be a time of great excitement in the state's aerospace and defense cluster. We have seen a lot of diversity in the types of companies coming to and expanding in Utah, as well as in the products they create. I expect that we will see that diversity bear considerable fruit in the next several years."

So does having lots of workers. "We are five years younger than the next youngest state — Texas," says Harter. "We have very large families with lots of kids. Almost one-fourth of our residents go to a K-12 school. That comes to 576,000 kids. The average age of Utah workers is 29; and 100 percent of the corporate income tax and 100 percent of the personal income tax in Utah goes to support education."

Companies also find a highly trained work force that is bilingual, says Harter. "We have one of the highest percentages in the nation of people who speak more than one language."

"Research universities and regional universities and community colleges are vital to our entire work force effort," notes Harter. "We meet annually with every industry in Utah. We conduct a thorough review and make sure that each industry is getting the support they need."

That's why Goldman Sachs is adding 300 people in Salt Lake City, says Harter. "It is now the second largest facility in their company," he says.

Hot spots besides Salt Lake City in Utah include Ogden and South Jordan. HomeDepot.com is building a 95,000-sq.-ft. (8,826-sq.-m.), 650-job facility in Ogden, where Newell Rubbermaid has relocated its Levolor window blinds division headquarters and plans to hire 550.

"Ogden has received numerous recognitions as a top place to live and work in the U.S. and for the quality of our work force and for being one of the fastest communities to recover jobs lost during the recession," says Steve Fishburn, business development manager for the City of Ogden.

Ogden also landed Wayfair, the second largest online retailer of household goods in the country. The firm relocated a customer service contact center and a distribution center to the city from Boston. The firm is taking up 105,000 sq. ft. (9,755 sq. m.) in Ogden.

"Wayfair has 350 employees and is hoping to expand to about 600 workers over the next few years," says Fishburn. "We competed against 85 cities to recruit the Home Depot project and against 65 cities for Wayfair."

"Our residential building permits are leading the state," says Brian Preece, director of city commerce for South Jordan. "This is the place where people want to live right now."

Adobe is developing a $1.6-billion technology center in northern Utah County that could add up to 1,000 new employees.
Photo by Kevin Winzeler courtesy of the Utah Governor’s Office of Economic Development