State incentives to retain jobs evolve with the times,
but defining “at risk” can be tricky.

by JAY BIGGINS and BEN WEISFUSE 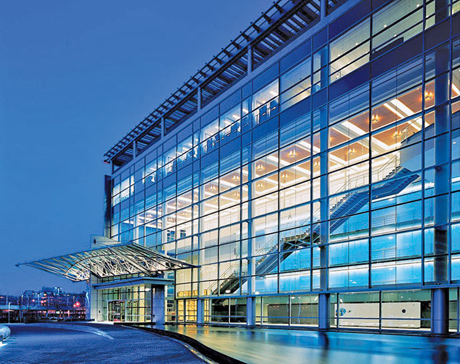 In 2011 UBS considered moving its 2,000-employee North American headquarters (pictured) out of Stamford, Conn., where it was lured from New York 15 years earlier by, among other things, a $165-million incentive package. After considering a $27-million package from New Jersey, as well as a spot at the redeveloped World Trade Center site back in New York, UBS in August 2011 committed to staying in Stamford through its lease expiration in 2017, and was rewarded with a $20-million forgivable loan from the state in return for investments in infrastructure, employee training and technology. The latest? Some in Stamford were part of a 10,000-employee reduction announced in early November, but UBS has reassured the state that it will honor its commitment to maintain at least 2,000 employees in the state.
Photo courtesy of UBS
A

s the global economy struggles to recover from the worst recession in recent memory, persistent high unemployment and low investment have begun to redefine the way economic development policy makers think about employment goals. The simple but harsh math of economic development starts with a basic premise: There can be no job growth before first retaining existing employment.

A growing number of states have modified existing incentives programs or created new ones to address job retention, including pioneers Illinois, Indiana, Michigan, Ohio, Massachusetts and New Jersey. As this roster indicates, retention incentives are concentrated in states with relatively high cost structures in the industrial Midwest and Northeast — states with legacy industries under enormous global competitive stress and excess capacity. Not surprisingly, many retention incentives are focused on (or limited to) manufacturing projects and/or distressed areas. Other states exposed to distressed industries have joined, while relative newcomers to incentives, such as Arizona, also have created tools to address the job retention imperative.

Running against the grain, Michigan has recently tightened up on retention incentives, requiring a company to also generate at least 25 new jobs. Possibly this is an indication of how discouraging job retention can be, or perhaps a harbinger of an eventual swing back to a new-job emphasis as the economy improves.

Updates From the States

The following is a brief summary of some of the most compelling retention incentives programs:

Massachusetts: The Economic Development Incentives Program (EDIP) was recently amended to provide for a tax credit of 40 percent of investment in Manufacturing Retention Projects retaining at least 50 jobs, and located in "gateway communities" — areas affected by out-migration of manufacturing employment. The tax credits are applied against corporate income tax or can be refundable in the event the company does not have adequate tax liability.

Illinois: Illinois has long employed a favored incentives format in the Midwest — the EDGE program, Economic Development for a Growing Economy. The EDGE program allows discretionary corporate income tax credits for up to 100 percent of personal income tax withholdings. The maximum term is 10 years. Projects must retain at least 25 jobs with an average wage above the county average, and invest at least $5 million in an existing facility.

Indiana: Indiana also has its own EDGE Program, providing discretionary tax credits against state corporate income tax of up to 100 percent of personal income taxes withheld for up to 10 years. Unlike the Illinois EDGE program, the Indiana tax credit is refundable — a potentially crucial difference for struggling companies lacking adequate tax liability to utilize the tax credits.  A minimum of 35 retained jobs paid above the county average wage is required, and the jobs must be retained for two years beyond the term of the tax credits (i.e., maximum term of 10 years + two-year retention).

Kentucky: The Kentucky Reinvestment Act (KRA) Program allows discretionary awards of corporate income tax credits for up to 10 years, limited to either 50 percent of capital costs or 100 percent of retraining costs. The KRA requires a modest capital investment of $2.5 million, and provides for a cushion in job retention obligations, requiring maintenance of at least 85 percent of the prior year's headcount. In addition, the Kentucky Industrial Revitalization Act provides non-refundable tax credits for manufacturing and agri-business (25 jobs minimum) and coal projects (500 jobs).

New Jersey: New Jersey has experimented with progressively more impactful retention incentives to retain jobs and to pursue "smart growth" objectives. In many ways New Jersey has been among the most ambitious and creative states in confronting complex economic development challenges.

The basic retention program is New Jersey Business Retention and Relocation Assistance Grant (BRRAG), which provides for an annual corporate income tax credit of up to $2,250 per job retained (depending on the amount of capital investment involved), ranging in term from one to six years based on the number of jobs involved. Employment must be retained five years beyond the last year of received credits — i.e., a total retention term ranging from six to 11 years. This program has a $20-million annual cap.

However, the BRRAG program was temporarily overtaken by a more potent stimulus program enacted in 2010 — the Grow New Jersey program — providing for transferable tax credits ranging from $50,000 to $80,000 per job over a 10-year term for projects in one of several "targeted industries" and located in designated areas (most of the state). Minimum investment is $20 million.

In addition, New Jersey offers the Urban Transit Hub Tax Credit (UTHTC), a program sized to have immediate impact in spurring catalytic projects within a half-mile radius of mass transit stations in designated cities. Industrial projects served by freight rail also are eligible. Capital investment of at least $50 million and 250 jobs are required, which can be satisfied by existing jobs certified to be "at risk" of leaving the state. The tax credit is 100 percent of qualified capital investment if at least 200 of the jobs are new; otherwise the tax credit is 80 percent.

The UTHTC and Grow NJ programs were authorized under the same $1.75-billion program cap to be awarded by July 2015. However, based on the projects in the pipeline, tax credit capacity for both programs will be exhausted by the end of 2012. The Governor and legislature are considering how to retool and renew funding for the next generation of incentives.

Ohio:  The Ohio Job Retention Tax Credit Program (JRTC) allows discretionary corporate income tax credits of up to 75 percent of personal income tax withholdings for up to 10 years. Ohio requires retention of at least 500 jobs. Minimum capital investment varies with project type — i.e., $50 million for manufacturing and $20 million for office operations. The Ohio Legislature established a $13-million annual cap for the JRTC Program, and made the tax credits refundable.

Connecticut: The Urban Reinvestment (URA) allows transferable tax credits over 10 years for projects with at least $5 million in capital investment. The URA was further enhanced by adoption of the First Five Program, which allowed formerly mutually exclusive incentives, including tax credits and forgivable loans, to be bundled into a single package, for the first five eligible businesses that apply. The program has been expanded to eight projects, and has been extended and rebranded as "Next Five." Under this enhanced program format, an eligible retention project must have a minimum capital investment of $25 million.

Other states with incentives statutes permitting their programs to be used for retained jobs include Florida, Georgia, Iowa, Louisiana, Maryland, North Carolina, Pennsylvania and Virginia.

A prevailing theme throughout all retention incentives programs is a fundamental challenge: The basic factual premise underlying a "retained job" is the risk it will be relocated or eliminated without incentives. This challenge imposes a heavy burden of due diligence and negotiation on economic development officials to avoid sliding down a potentially slippery slope toward a situation in which any lease expiration means jobs are "at risk" of leaving, setting up an expectation of incentives that is neither fiscally possible nor appropriate.

Some states have set the bar high. New Jersey requires a detailed competitive analysis backed up by a CEO certification that jobs are in fact "at risk." Such standards may well be important in preserving the integrity of incentives programs, and their continued support by statehouses and the general public.