From financial services and insurance firms to retailers and restaurants, Columbus provides a safe haven for corporate management. 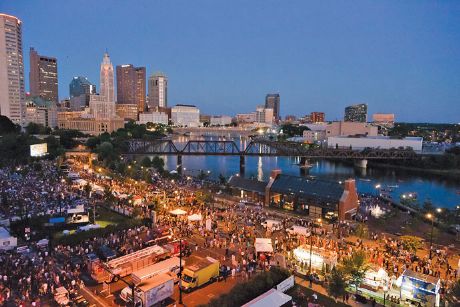 More than 300 corporate managing offices call the Columbus area home, including 15 Fortune 1000 companies that base their corporate headquarters in the capital region of Ohio.
W

hen your company employs nearly 20,000 people in a single city, it's a safe bet that your firm likes the area's business climate.

"Several factors make Columbus a great employment market," says Lyttle. "It is located in the Eastern Time Zone and it offers close proximity to the financial markets of New York, Philadelphia, Chicago and Wilmington, Del. There is a terrific work-force pipeline produced by the 100,000-plus graduate students in the area at Ohio State University and 54 other colleges in the region. And the company's history in Columbus seals the deal. BankOne was born and raised in Columbus, and BankOne merged with JP Morgan Chase in 2004. There was a lot of physical infrastructure in place here to serve the merged company."

The financial services juggernaut is not alone. More than 300 corporate managing offices call the Columbus area home, including 15 Fortune 1000 companies that base their corporate headquarters in the capital region of Ohio.

JP Morgan Chase is the largest private-sector employer in Columbus, and that is no accident, notes Lyttle.

"Our company has 19,300 employees in the Columbus area," he says. "We have 260,000 people worldwide. Columbus is second only to New York in terms of our employment in a single market. This goes back to our long history, through BankOne, with Ohio State University. We have a very close relationship with OSU. This region is a large employer of financial sector talent and insurance talent. That is very good for our company. Having Nationwide Insurance here, as well as other large financial services firms and insurance providers, means that there is an abundance of well-trained talent based in the Columbus area."

At 2 million sq. ft., the McCoy Center in Columbus represents JP Morgan Chase's largest facility in the world in both size and employment. More than 10,000 company employees report to McCoy each day for work.

"It is the square footage equivalent of the Empire State Building," says Lyttle. "It is on 200 acres and is four stories tall. It is a quarter-mile end to end."

Saving Capital in the Capital City

"Columbus is a good headquarters market for a number of reasons," Boyd says. "It has a very diverse economy. It has retail, logistics, technology, academics, government, and insurance and financial services, and that diversity gives stability to the local economy. There are incentives that are specific to downtown Columbus for locating office projects in the central business district. Our clients are looking at this location very closely."

Costs are the crucial differentiator, notes Boyd. "Columbus has a very attractive operating costs profile. It fits the profile of a smaller, less congested metro area in the Midwest."

"Columbus is only a one-hour flight from all of the major financial markets in the U.S. that are east of the Mississippi," says Boyd. "OSU provides a great base for employees, and that gives Columbus-based corporations a competitive edge."

Jamie Richardson, vice president of Columbus-based White Castle, says the national restaurant company employs 300 workers at its headquarters. "Columbus has a great quality of life and a great capacity in its growth pattern. It has become a magnet for companies looking to put down roots," he says.

White Castle was founded in Wichita in 1921 but chose to move to Columbus in 1934. "What brought us here are the same things that keep us here today," Richardson says. "We have an incredibly loyal group of people that fit nicely with our corporate culture. The work force here is incredibly bright, articulate, creative and hard-working. That is true of Central Ohio in general and is a big reason why we have 68 restaurants in Ohio. They are incredibly good problem-solvers who have an exceptional ability to communicate and connect."

The family-owned company, which specializes in serving fresh, hot hamburgers and cheeseburgers that can be consumed in just four bites, has remained a tight-knit operation for 91 years, notes Richardson. "And we are not just restaurants," he adds. "We also own and operate three meat plants, two bakeries, two food-processing plants and two factories where we make the fixtures and equipment for our restaurants."

Columbus has so many eatery establishments that it could be known as restaurant row. Other well-known chains based in the Ohio state capital include Bob Evans, Cameron Mitchell, Wendy's and Donatos Pizza.

Besting Texas for a Prized Project

By Oct. 15, 2013, Bob Evans Farms Inc. will move into its new 175,000-sq.-ft. headquarters in the Columbus suburb of New Albany. Based in the Columbus area since 1968, the restaurant company plans to employ more than 400 workers at its home office by the time of the relocation.

"The first and most important factor behind our selection of New Albany was that it represented the best place for us to be able to attract, develop and retain the best work force possible," says Joe Eulberg, executive vice president of human resources for Bob Evans. "Also, the ability to build the right kind of headquarters on the site available was critical. The New Albany package overall was very strong in that regard."

Eulberg adds that Bob Evans also must consider "the best use of shareholder dollars. How do we most responsibly do the right thing from a cost standpoint? That worked out very well for Bob Evans in New Albany."

Eulberg notes that Bob Evans looked at other cities and states, including Texas. "Texas certainly was in the mix for this project," he notes. "But we did not have a desire to leave Ohio. A long-distance move would have been more disruptive to our operations. And it is better for logistics to remain here in Central Ohio."

Eulberg praises the Columbus business environment. "The business community here works together tremendously well," he says. "It is the 15th largest city in America and has the major city amenities without a lot of the major city problems. In the restaurant business, you always want a stable environment in the local economy. From a transportation and distribution standpoint, Columbus is a real leader. Moving product in and out of here is quite easy, and you can reach a lot of the U.S. population directly through here."

Les Wexner, chairman and CEO of Limited Brands, agrees. The popular women's apparel and accessory retailer has been based in the Columbus area since the company's founding in 1963. Today, the firm employs 6,000 people in the region.

"The city has a young population, and the universities give us an international edge," says Wexner. "We are constantly pushed to stay current. Columbus has the resources to support the industry, the talent to keep us innovative, and the clientele to cater to. Columbus offers a profoundly diverse population, worldly in its outlook but with Midwestern values."

Limited Brands occupies more than 5 million sq. ft. at its headquarters campus in Columbus and owns such brands as Victoria's Secret, PINK and Bath & Body Works.

"We have enormous natural advantages in Columbus," Wexner adds. "We are the population center of North America. We are the state capital of a major state. We have the third-largest teaching university here. It is a good place to be."

White Castle employs 300 workers at its headquarters (above right). The national restaurant company was founded in Wichita in 1921 but chose to move to Columbus in 1934.