Johnson County knows how to cultivate a knowledge economy. 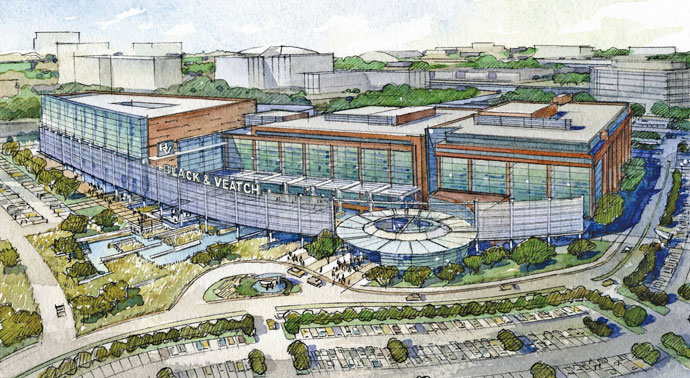 Black & Veatch, headquartered in Overland Park, Kan., continues to be at the vanguard of Johnson County’s cluster of successful and growing architecture, engineering and construction firms. The company in 2009 announced the $60-million purchase and subsequent $47-million renovation plans for its HQ site, which at that time hosted 2,300 of the firm’s 3,800 Kansas City-area employees.
Image courtesy of Black & Veatch
by ADAM BRUNS
W 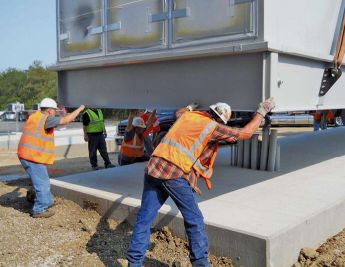 A 2.5-MW generator is set into position at the new, $30-million CoSentry data center in Lenexa, one of 20 municipalities in Johnson County, Kan. “Incentives from the state as well as the right power infrastructure from KCP&L will allow CoSentry to build the most redundant, reliable and robust co-location center in the Kansas City metropolitan area,” said Doug West, vice president and general manager, when the 60-job project was announced in January 2012.

hen Teva Pharmaceuticals broke ground in July 2012 for its $71-million, 400-job move from Kansas City, Mo., to the Kansas City suburb of Overland Park, Kan., it was just one of some 50 corporate projects since January 2011 to arrive in that city's home territory of Johnson County.

The total surpasses by a healthy margin the tally in runner-up Wyandotte County (home to the city of Kansas City, Kan., and an effective merged city-county government). It also casts the spotlight on the industrial development success of a county long known for its affluence but not necessarily its influence as an economic development engine in its own right.

Johnson County encompasses 20 municipalities, with Overland Park and Lenexa leading the way in recent corporate facility development. The county itself has no economic development agency. What it does have is a reputation for wealth, and for a wealth of education excellence. According to figures from the Kansas City Federal Reserve and U.S. Census, more than 52 percent of Johnson County's population holds a bachelor's degree or higher. (The national average is 28 percent.)

The county has seen recent projects from animal health firm CEVA Biomune and Perceptive Software in Lenexa; Canadian automotive parts firm Van Rob in Shawnee; and national e-government specialist NIC in Olathe, among others. The county also is home to an organically grown cluster of architecture and engineering firms, most of which seem to be expanding in some capacity.

Blake Schreck, president and economic development director of the Lenexa Chamber of Commerce, says growth in biosciences and engineering "in this era of the knowledge worker, coincides nicely with the county's high valuation of education." Not only can parents see strong career fields to which they can point their children, but "it plays into the profile we like to promote here — service-sector, white-collar, high-paying jobs." He says Lenexa welcomes 50,000 people per day to workplaces in the city, and is only half built-out as it expands westward.

Having led economic development efforts in neighboring Olathe and Overland Park during his nearly 30 years in the area, Schreck can attest to what he calls a "unique patchwork quality" across the region. Sometimes it's downright neighborly, as with the temporary housing of some CEVA employees at an incubator in Olathe while the company completes a $7-million R&D expansion.

The state line issue is always there, says Schreck, but he sees it as a marketing advantage for the overall area, noting that there are not many bi-state metro regions in the nation with the size, heft and political weight of Johnson County on one side and Jackson County, Mo., on the other.

"The state line gets criticized as a barrier to development," he says, but at the same time, "people see they have a lot of options."

The quality-of-life options in Johnson County have been a strong suit ever since the development of the Corporate Woods business park in the early 1980s. Schreck says the park was a pioneer and signature development in the concept of living and working in the same community.

"Overland Park was the place to be, and Corporate Woods was a big part of that," he says, attracting a number of "big-time" companies to the still strong College Boulevard corridor. Today, just down the street, the leftover campus space from Sprint's downsizing has essentially presented the area with another Corporate Woods, in the form of a couple million sq. ft. of office park. It is a good scenario for a county that's added 10,000 people a year for 25 years.

A list maintained by the Kansas City Area Development Council of the 37 major architecture/engineering firms in the region shows that 13 of them have operations in Johnson County employing 5,576 people, or 44 percent of the regional employment total in that niche. They're led by Black & Veatch and its 3,600 employees. The company in 2009 announced the $60-million purchase and subsequent $47-million renovation plan for its HQ site in Overland Park, which at that time hosted 2,300 of the firm's 3,800 Kansas City-area employees. Plans call for the 36-year-old campus, now nearing the completion of its makeover, to ultimately have the capacity to host 3,400 employees.

Others in the cluster include Kiewit Power Engineers; Shafer, Kline and Warren; GBA; Henderson Engineers and Olsson Associates.

Even the AEC giants based in Kansas City, Mo., have their hands busy at infrastructure projects for the growing Johnson County: HNTB is project manager consultant for the $250-million Johnson County Gateway at the busy interchange at Interstate 435, Interstate 35 and Kansas Highway 10, where projections say vehicles per day will rise from the current 230,000 to 380,000 by 2040. And Burns & McDonnell, with Topeka-based partner CAS Constructors, is heading up construction of a new $16-million wastewater treatment plant in the southwestern part of the county, serving not only the growing communities of Edgerton and Gardner, but also the 1,000-acre Burlington Northern Santa Fe Intermodal Facility and adjacent Logistics Park KC.

Johnson County accounts for 34 percent of the State of Kansas population holding at least a bachelor’s degree, and nearly 42 percent of the total in the bi-state Kansas City MSA.

One of the county's fast-growing firms is Olathe-based Terracon Consultants Inc. The firm has offices all over the nation, driven in part by 25 acquisitions in the past decade alone, and has grown from a $60-million company to a $400-million company in the past 15 years. Terracon President David Gaboury, P.E., says the company, born and bred in Cedar Rapids, Iowa, moved to the area in the mid-'80s because it was practical and because growth was happening in that direction.

"We're a little different from some of the engineering companies here, because our business model is decentralized," he says of the employee-owned firm, which now has 135 offices around the U.S. "In earth and environment work,  having local people and knowledge is important."

A local engineering office in Lenexa, where the headquarters used to be located, employs nearly 80 people. In 2007 the growing company decided to plant its new corporate headquarters in Olathe, where 140 employees work. Gaboury says the process was his first experience of the incentives competition between Missouri and Kansas, something he calls "kind of a crazy deal." Pondering the reasons behind so many engineering companies in the area, he says, "I can't figure it out. It may be more serendipitous than anything else."

Then again, he observes, maybe it's because there are few peers when it comes to a well-educated high-quality work force, with a strong work ethic and with an affordable compensation range vs. locations on either coast. Moreover, he says, "People in Kansas City are not interested in moving to other places."

Engineering schools at Kansas State University in Manhattan; Missouri State in Rolla, Mo.; and Iowa State in Ames provide plenty of engineering talent for that side of the business. But it can often be a challenge to interest some people in relocating to Olathe, he says.

"When we have attracted senior talent to come to Kansas City for corporate positions, there are some who are very open to that, but for people from the coasts, there is work to be done to get them to think this is somewhere they want to be."

Yet when it is time to get moving to a project site or client office, he finds it beneficial to fly from the middle of the country at Kansas City International Airport — and to fly Southwest Airlines 90 percent of the time.

"Thank God for Southwest," he says. "We have quite good Southwest service, and can get nonstop around the country."

"I'm not from Kansas City," he says, noting his natural bias for his former home of Denver. "But I'd be hard pressed to make a business argument there's a better place."

The state-line issue reared its head this year when Teva North America announced its would move its Teva Neuroscience headquarters from Missouri to Kansas. Then again, there were beneficiaries on both sides.

The City of Overland Park issued $65 million in bonds to help Teva with the project, which is being developed by Block Development Co. of Kansas City, Mo., and designed by Hoefer Wysocki Architects, based in the Johnson County municipality of Leawood. The State of Kansas is contributing nearly $31 million in incentives. The company will employ 400 at the site, formerly a Sprint property, and has said it may eventually employ 600 there.

One thing can unite the whole region, however, and that's Google, which chose the area over more than 1,000 others as the first recipient of its Google Fiber ultra-high-speed broadband infrastructure program. The project announced pricing options in July. The first homes to be connected were expected to come online in September.

"This launch of Google Fiber has huge and positive ramifications for Kansas City," said Jim Heeter, president and CEO of the Greater Kansas City Chamber of Commerce, while complimenting the bi-state partnership of Kansas City, Mo., Mayor Sylvester "Sly" James and Kansas City, Kan., Mayor Joe Reardon. "The access Kansas City will gain means higher productivity, better learning opportunities, more jobs, and increased revenue in our community. It seems the Internet knows no boundaries, and I applaud Mayors James and Reardon for having a similar mindset when it comes to reaching across state borders, working collaboratively to maximize the opportunities for their two cities." 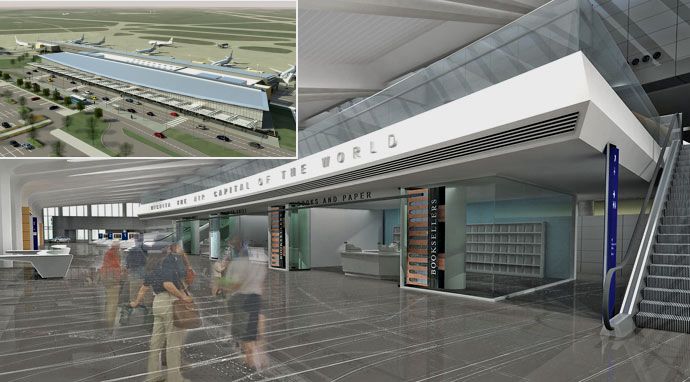 Wichita Mid-Continent Airport broke ground in September on a new 273,000-sq.-ft. (25,362-sq.-m.) terminal building.  Designed by Kansas City, Mo.-based HNTB, in association with GLMV Architecture, the terminal is designed to reflect the importance of the history and future of aviation in Wichita. The terminal will feature 12 gates and is expected to open in 2015.
Images courtesy of HNTB