How to Measure
A Nation’s Image

National reputations are hard to quantify and even harder to repair
once damaged. A brand index for countries helps with the first part. 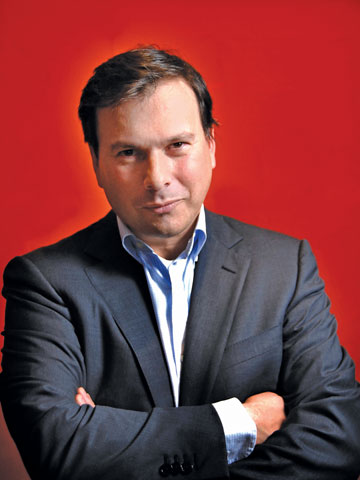 ASA’s space program contributed to countless inventions, including the lithium battery, the artificial heart pump and even the cordless vacuum. It also helped to demonstrate America’s technological prowess to the world — an element that contributes in building the U.S. “nation brand image,” according to Simon Anholt, independent government policy advisor and creator of the Anholt-Gfk Roper Nation Brands Index. Anholt explained his Index at a recent FDI Marketing and Communications Seminar in London organized by Red Hot Locations, producer of the World Forum for Foreign Direct Investment.

Anholt’s Index measures the image and reputation of the world’s nations in such categories as people, products, government and culture. It compares each nation’s brand image to the rest and tracks how they rise and fall over time. America’s position as the leading nation brand in the Index has been built up slowly in the minds of the world’s public in the ways they encountered and engaged with “all things American.” This includes viewing NASA moon shots, Hollywood movies, meeting Americans in bars and viewing any marketing push from the country.

As this brand image is built up over a long period of time, and with so many personal inputs into the perception, rapid changes to the ranking of a country’s nation brand are extremely rare, says Anholt. But when they do occur, they have wide-ranging consequences for the nation that go beyond reputation and investment.

For example, between 2007 and 2008, American attractions, such as the Grand Canyon, became 3.5-percent more scenic and beautiful to the rest of the world. This was not because America underwent a massive anti-litter campaign, finished a series of historic renovations or engaged in a worldwide marketing initiative. Instead, the election of Barack Obama as President signaled a break with a previous administration and policies that were considered to be unpopular across a wide proportion of the world. Whether his election was good or bad for the U.S., or even the world, was not the point, but many in the world perceived it to be positive change.

This single event affected how many people viewed America in areas far outside those usually associated with government. America became more beautiful and its people were thought to be nicer simply because of a change in government. This helped America rise from seventh to first overall in the Index.

The opposite can also be true. The 2005 publication in Denmark of cartoons insulting the prophet of Islam, Muhammad, dealt the country a blow from which it still has not completely recovered. Scandinavian countries enjoy a good reputation — they are considered wealthy, tolerant and well educated, says Anholt. But after the publication of the cartoons, Denmark’s brand image plummeted. The effect was widespread. Not only was it considered a bad place for a holiday or in which to invest, the people were thought to be uneducated and rude, and even the landscape was suddenly atrocious, he explains. “That’s enough to sink the ship, perhaps permanently.”

At the Red Hot Locations event in late September, Anholt discussed the impact that actions have on a country’s brand image and what they mean for its chances of attracting investment. According to Anholt, there is no such concept as “brand” as a standalone term. A nation’s brand image is much more than simply an image associated with it, he explained. It includes everything people know and assume about a country. It is largely made through the actions that a country undertakes and the assumptions already held by individuals. This makes it important to business but largely unchangeable through short-term actions.

“Between 2007 and 2008, American attractions, such as the Grand Canyon, became 3.5-percent more scenic and beautiful to the rest of the world.”

Hollywood and NASA have been America’s greatest marketing tools, says Anholt. Hollywood can distribute a positive but independent image of America through film. NASA’s forays into space served as unbeatable displays of American ingenuity. Neither of these institutions and their impact on global perceptions could be achieved by another country, he adds. “In fact, you could consider the Declaration of Independence the United States’ original brand strategy,” says Anholt.

But unfortunately for the U.S., its nation brand is slowly but surely being eroded. This is not unique to America. All of the leading, established Western nations have been dropping by small increments every year. Meanwhile, those in the middle and even at the bottom creep upwards by the same amount. “It would be statistically irrelevant if it was not so year after year,” Anholt says. “You can almost hear the creaking of the machinery as the whole thing is preparing to turn upside down.”

There is not a whole lot America can do about how the general populace of the rest of the world views the U.S. and other leading nations, he adds. Country-wide reputations are large constructs that, for good or ill, are fairly well fixed in peoples’ minds. “It could help if America were to focus itself on being more useful around the place, though.”

There is a bit more room for changing a nation’s brand image when focusing solely on investors, however. Overcoming a bad reputation is difficult but can be achieved with hard work, he says. Many investors are willing to separate business decisions from other areas that would normally be affected by a country’s brand image. “For example, they can disapprove politically and be perfectly happy to invest,” he says. “Or they can think that it’s absolutely the worst place to invest but be perfectly happy to go on holiday there.”

But most areas have no reputation. The average person thinks of three countries — their own, America and one other that is currently on their minds for whatever reason — they are planning a trip or they spoke to someone from there recently, for example, says Anholt.

Even investors, who are supposed to know about places, have limited know-ledge. This can be both a benefit and a hindrance. For example, looking at regions in different nations, new cities in China can attract investment, because they represent an emerging undiscovered opportunity, despite the Chinese government dragging down the nation’s overall brand. Whereas American states without an international reputation can suffer. “The perception is: ‘if you haven’t heard about it before, then it wasn’t worth hearing about,’ ” says Anholt.

As it currently stands, the world’s perception of positive brand images is moving away from regions in America and other leading Western nations. Many of the “new world” markets do not have a reputation for colonialism or exercising “hard power” options such as military intervention.

Many of these locations do not have the history or infrastructure to shoot for the stars — by rocket or red carpet — so focus on the “soft power” of values, culture policies and institutions.

Only time will tell whether America will focus on the hard or soft going forward, and how successful each will be. What will be the impact of the next election on the world’s perception of the U.S.? We will know very soon. 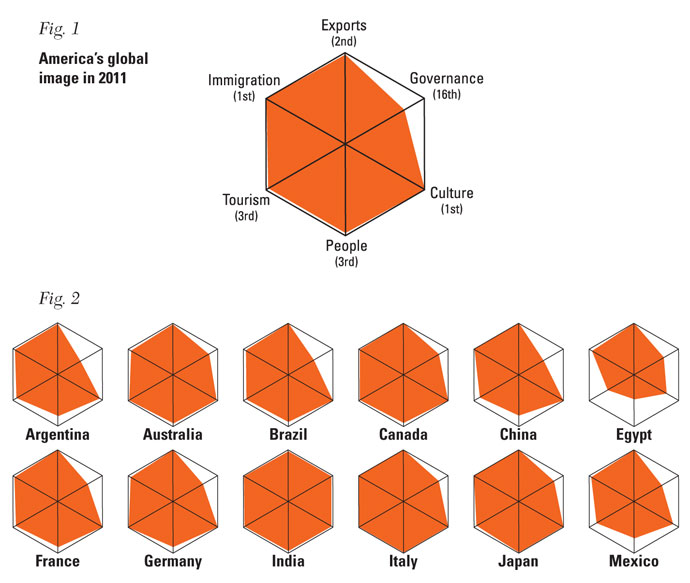 The Anholt-GfK Roper Nation Brands Index has, since 2005, been polling a sample equivalent to 60 percent of the world’s population on its detailed perceptions of 50 countries, and is one of the largest social surveys ever conducted. The diagram shows how international public opinion perceives the United States in each of six main subject areas — the “points of the hexagon” — in which a series of questions measure popular perceptions of governance, exports, people, tourism, culture, investment and immigration. Figure 1 shows America’s global image — characteristically strong in all points of the hexagon apart from a big dent in the policy area — and Figure 2 shows how this breaks down in 12 of the 20 key countries where the survey is conducted.