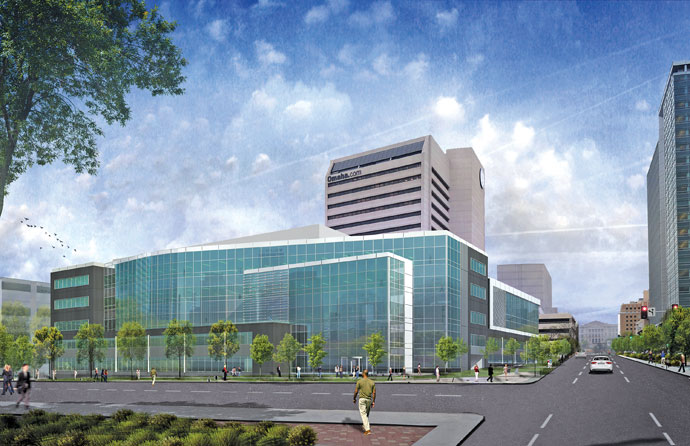 "We looked at some other Midwest cities — Chicago, Kansas City, Minneapolis, etc. — where we had some employees," says Robert Jones, chief administrative officer of Gavilon. "We looked at flights and industry perspective. But the pivotal factor came down to the fact that our existing employee base of 400 workers is right here, and we are very committed to the city of Omaha."

By December of 2013, the Gavilon employees who currently work in rented space on the ConAgra corporate campus will move to the new World-Herald Square Plaza, a glass-exterior facility that could accommodate up to 560 people.

"We are very excited about this project," says Jones. "Our ability to attract a talented and highly educated work force is one of the paramount reasons why we believe in Omaha. The school systems and the quality of life here are second to none."

Gavilon is just one of a growing number of firms betting big on Nebraska. Under the leadership of Mayor Jim Suttle and Gov. Dave Heineman, Omaha is rapidly becoming a preferred destination for corporate headquarters between Chicago and Denver.

"The skill level here is just tremendous," Jones says. "We hire receptionists with college degrees. For every job opening we have at Gavilon, we will get 50 to 100 applicants. The people here want to work they work hard. They are very dedicated and committed. We ask a lot of our employees, and they are always up for the challenge."

Jones says he expects Gavilon to continue to grow. Company-wide, the firm employs about 2,000 people. "We do believe that we will expand in the agriculture and energy markets," he says. "Our head count at Omaha will grow too. We will continue to grow the infrastructure that supports the business. We provide all of the necessary support services here — legal and accounting and risk management, etc. We also do some commercial activities here, such as dynamic trading."

The new building will feature a state-of-the-art trading floor and other upgrades. Gavilon should qualify for nearly $4 million in tax-increment financing at the site in Omaha's central business district.

"The economic development organizations of Nebraska and Omaha were very helpful," Jones says. "We worked with the state, the city and the local chamber. They provided tremendous support for us in terms of what we were doing from a financing perspective. They also helped us in getting the building approved and opening doors with certain partners on this project. And they were very keen to make us aware of incentives that we qualified for here in Omaha."

Jones adds that "Omaha is one of those cities that, until you have been here, you have no appreciation for it. I did not know that the city had so much to offer until I moved here. The housing market is great, and you don't have to send your kids to private school. This is a very family-friendly environment."

Gavilon is not alone. On June 19, TPG TeleManagement celebrated the grand opening of its own global headquarters in Omaha. 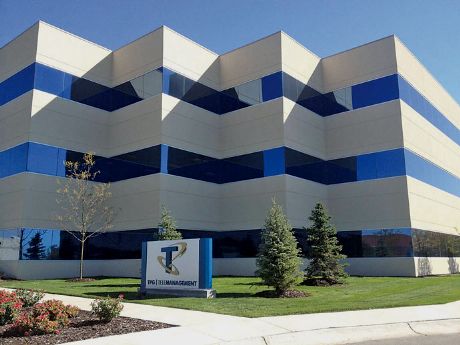 A firm that specializes in helping other companies evaluate their employees' interactions with customers, TPG was recently named to the Inc. 500 for the second year in a row and was named the seventh-fastest-growing business in Nebraska by the Omaha World-Herald.

"We have been in Omaha for 12 years. It is a good fit for our business model," says Scott Keller, president of TPG. "We pull from the best of the best employees with customer contact service for engaging customers. We do this through call and chat listening. We wanted and needed incredibly rich talent to pull from, and we found these folks in Omaha."

It takes a specialized skill to do what's needed at TPG, notes Keller. "We monitor calls for quality assurance," he says. "We are considered the number one brand in the country for doing this work. We do the analysis of these calls for our customers and then turn that data into information so that the client will know how to improve their business and improve the way they interface with the consumer. To do this effectively and remain the industry leader in our field, we need to hire the best people available."

Keller says that "the base employee at TPG has demonstrated leadership in a customer contact center. They have been a leader in a quality division or a manager at a call center. Our first Omaha operation was opened in 2000 with just seven people. Our CEO Lisa DeFalco selected Omaha for its work force, which was very experienced in the customer contact business. She also found that Omaha was a very pro-business area."

Omaha beat out Greater Phoenix and other well-known call-center markets to land the TPG operation 12 years ago. "The initial pull to Omaha was the fact that this was the best location of leadership teams in this sector," says Keller. "They were headquartered in Omaha 20 to 30 years ago. So many large brands, like ConAgra, are centered in Omaha, and that meant that many of the relationships in this industry were already here."

Top leadership teams at Gallup, West Corp., ITI and other firms were based in Omaha when TPG moved to the city, "and that made it so much easier to come here and thrive in this market," Keller says. "Our company has evolved over time, and now we are considered the best at what we do."

Keller says TPG "needed to make sure that we could run East Coast to West Coast shifts at its new headquarters. We now have a global time zone operation. Being located in a Central Time Zone community allows us to serve all of the U.S. time zones easily. We also now serve clients in seven different countries."

Keller likes other Nebraska attributes too. "Fundamentally, the cost of doing business here is very competitive," he says. "The economic development people have been very helpful in terms of training support. The state and the city and the chamber are all doing whatever they can to see that we generate more jobs in Omaha."

Omaha Mayor Jim Suttle says that is what the citizens of his city elected him to do. "We are in the black and we are going to stay in the black as a city," he says. "My goal is to reactivate some older tracts in the city so that we increase employment opportunities for some of our poorer areas. Just north of downtown, I put together a 70-acre [28-hectare] tract with sewer and other essential utilities so that we could create four shovel-ready sites for industry. That is part of our immediate strategy for the next 12 months."

The mayor also took an active role in a redevelopment known as Midtown Crossing. Mutual of Omaha invested $350 million into seven buildings in Midtown. "That area is now doing very well," Suttle says. "The new apartments there are fully rented."

His next big project involves the demolition of the Civic Auditorium and redevelopment of four city blocks around it. "We will be looking for national developers for that site," the mayor says. "We hope to issue the RFP by the first of the year."

The Omaha mayor is not the only Nebraska official with bold plans. Gov. Dave Heineman says that Nebraska "needs to reform the income tax system in our state. We are just in the idea stage now, but we need to overhaul that system. Basically, 80 percent of our businesses are small business, and the income tax is how they pay their taxes. We need to make Nebraska more competitive for these small business owners."

The Tax Foundation recently conducted a study and concluded that "Nebraska has the lowest corporate tax costs for newly established business operations in the 50 states."

The Location Matters study, done in collaboration with KPMG, looked at a range of business taxes across seven industries and found that the Nebraska Advantage incentives program was a significant factor in the state's strong showing.

Still, the governor is not content. "We will continue to modernize our economic incentives program," Heineman says. "If there is an adjustment that we need to make in order to make Nebraska more competitive, we will do that."

The governor says he is committed to creating more international business opportunities for Nebraska companies. "We just returned from China. We want to open a Nebraska center for economic development in Shanghai," says Heineman. "There is an enormous opportunity for Nebraska products to be sold there. I opened an office in Japan in 2006."

Heineman says Nebraska will continue to pursue job growth in four major industries: biotechnology, information technology, distribution and logistics, and manufacturing. "We have some of the biggest railroads and largest trucking operations in the country here in Nebraska, and we have one of the largest food processors in the world, ConAgra, here as well," he says.

Heineman says he hopes that corporate executives around the country will consider not just Omaha but locations such as Lincoln, Kearney, Hastings, Grand Island and other communities around the state.

"We want a partnership for a lifetime. We want you to be an integral part of our state and civic community," the governor adds. "For people to come and see what we have to offer, that is so important. We can fill in all the blanks while they are here." 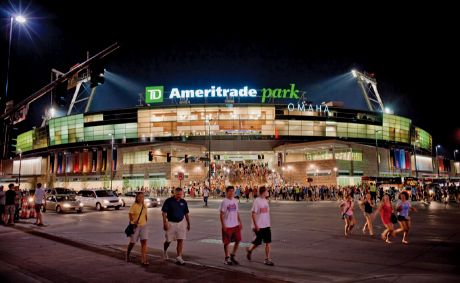 TD Ameritrade Park serves as the new home of the College World Series for NCAA men’s baseball in Omaha.

Photo courtesy of the Omaha Convention and Visitors Bureau