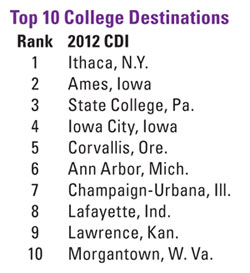 College students are no different from the companies that one day will hire them in looking for their own best return on investment, which is why the American Institute for Economic Research (AIER) this fall released its 2012 AIER College Destinations Index (CDI), which examined a dozen factors in evaluating the 227 U.S. metropolitan statistical areas (MSAs) with student populations of 15,000 or more.

Among the factors measured were degree attainment, cost of living, creative-class representation, arts and leisure, and area unemployment, entrepreneurial activity, earning potential and brain gain/drain statistics. Overall, the report found that the recession knocked larger metros out of the top 10 since the last report two years ago. "Between then and now, the economy changed," says Stephen Adams, president of AIER. Counter-intuitively, larger metro areas that rely on diverse economies have suffered more in the Index ratings, whereas smaller towns where colleges play a larger role have remained more stable.

However, some institutional anchors have better purchase than others.

A July report from Bain & Co. and global education institution investor Sterling Partners found that an increasing number of colleges and universities — now up to approximately one-third — are on financially unsustainable paths, with university debt on average increasing annually at 12 percent per year, even as tuitions reach the stratosphere (see chart).

"Higher education in the United States is facing a liquidity crisis of disruptive proportions," said Jeff Denneen, Bain partner and head of the firm's higher education practice in North America, "and it is imperative that universities become much more focused on creating value from their core. Who will pay $40,000 per year to go to a school that is completely undistinguished in any dimension?"

Routes to creating value may be found in part by freeing capital in non-core assets, said the authors, including better management of real estate, physical assets and intellectual property. U.S. colleges and universities, they found, collectively have more than $250 billion worth of real estate assets on their balance sheets. 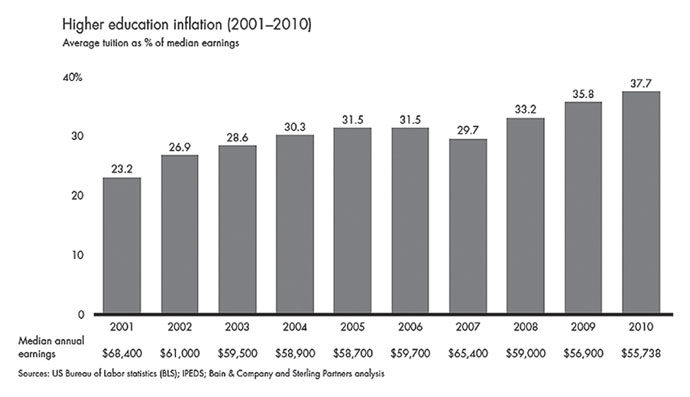 General Motors will open a new 500-employee IT Innovation Center in Austin, Texas, and a 1,500-employee center at its Warren Tech Center campus in Michigan. Here, GM IT employees (l. to r.) Dan Krzywosinski, Neal Bond and Michelle Lauka work in Warren, on the campus designed by architect Eero Saarinen and landscape architect Thomas Church that opened in 1956.
G

eneral Motors' plan to open four new IT Innovation Centers in the United States rolled into reality this fall with the September announcement of a 500-employee center in Austin, Texas, followed by the news one month later that a second center would hire up to 1,500 employees at the company's venerable Warren Tech Center in Michigan.

GM said it is "looking to create and deliver IT services with new capabilities that will help the company improve its performance, drive down the cost of ongoing operations and increase the level of innovation delivered to GM customers." In-sourcing IT services is central to that plan, as the company looks to transform over the next three years from 90-percent outsourced IT work to 90-percent in-house. The job range includes software developers, project managers, database experts and analysts.

According to media reports, GM has worked with the Michigan Economic Development Corp. and its Michigan Strategic Fund over the past year and a half to amend its global retention tax credits, with hundreds more new jobs still on the horizon. In the past few years the Warren Tech Center has welcomed a new advanced battery facility and, most recently, a new data center.

The Texas choice was based primarily on the existence of a talent base, said GM, with 46,000 people with the right skills, according to May 2011 Bureau of Labor Statistics data. The company's Texas employment base is 4,500, including 1,800 at GM Financial locations and more at two customer call centers.

GM is also a corporate partner at the Pecan Street sustainable living and smart grid project in Austin. An early October report from Jones Lang LaSalle found that connected cities have an annual GDP growth rate that is 0.7 percent higher, an unemployment rate that is a full percentage point lower, and office occupancy rates 2.5 percent higher than less advanced cities.

The report's No. 1 city from a pre-selected group of 10 was Austin, which is home to, among other things, the Texas Advanced Computing Center (TACC) at The University of Texas at Austin, one of the leading centers of computational excellence in the United States. apital-intensive large petrochemical complexes centered around ethylene crackers have been searching and siting across the U.S. But there's also a US$3.7-billion project coming to Nanchital, Mexico, near the port city of Coatzacoalcos in the state of Veracruz. Led by Brazilian firm Braskem in partnership with Mexican energy giant Grupo Idesa, the Etileno XXI project, several years in the making, moved forward in early October with the award of a $2.7-billion engineering, procurement and construction (EPC) contract to a partnership consisting of Fluor Corp., Technip and Odebrecht, the Brazilian firm that owns a controlling stake in Braskem. The EPC team will execute the contract in several operating centers located in Nanchital and Mexico City; Rome, Italy; Lyon, France;and Rotterdamin the Netherlands.

Etileno XXI will be located at the mouth of the Coatzacoalcos River at the top of the Tehuantepec isthmus separating the lowest point in the Gulf of Mexico from the Pacific Ocean by only 188 miles (302 km.). The complex will feature a 1-million-ton-per-year ethylene cracker, two high-density polyethylene (HDPE) plants, and one low density polyethylene (LDPE) plant. The project is also slated to include a 150-MW combined cycle power and steam co-generation plant, and a multimodal logistics platform.

In May the project received Mexican environmental approval, which was quickly followed by approval of a $300-million loan from the International Finance Corp., part of the World Bank Group. The project received approval for another $300-million loan from the Inter-American Development Bank in April. Those two lead loans will be backed by a "B Loan" between $600 million and $750 million and another $600 million approved by the Italian credit bureau SACE.

Etileno XXI is projected to create more than 9,000 construction jobs, and 3,000 direct and indirect jobs once operation begins in 2015. It is the largest direct investment in Mexico in history by a Brazilian company, and the largest petrochemical project in Mexico in 20 years.