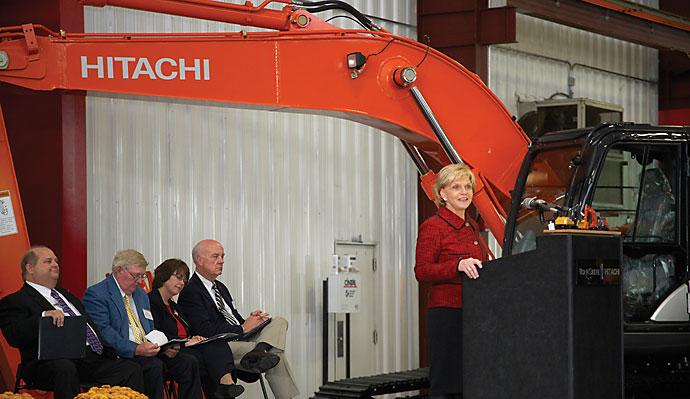 orth Carolina's combination of work-force availability and skill sets of interest to employers, proactive business-development agencies, logistics assets and higher education infrastructure helped it reclaim Site Selection's Top Business Climate spot from rival Texas — which wrestled the title from the Tar Heel State in 2011. Texas drops slightly to third place, behind Ohio's second-place finish — up from ninth place last year. Ohio also won the Governor's Cup this year, with the most new projects announced of any state in 2011, according to Site Selection analysis. Georgia and Virginia round out the top five. This year's ranking confirms the South's status as the region to beat, with nine of the top 10 states based there.

The publication's ranking is based 50 percent on a survey of corporate site selectors — who named Texas their No. 1 choice, followed by North Carolina — and 50 percent on five criteria, three that require states to demonstrate a strong record of attracting capital investment: the state's placement in Site Selection's most recent Governor's Cup ranking of qualified projects the previous calendar year; its Competitiveness Ranking, published the previous May; and its projects logged into the magazine's New Plant Database year to date. (Qualified projects meet one or more of these criteria: a minimum investment of US$1 million, 50 or more new jobs or new space of 20,000 sq. ft. or more.) The other two criteria are the Tax Foundation and KPMG's Location Matters analysis of state tax burdens on mature firms and on new firms. North Carolina performed strongly in all categories, garnering enough points to claim the top spot for the 10th time in 12 years. 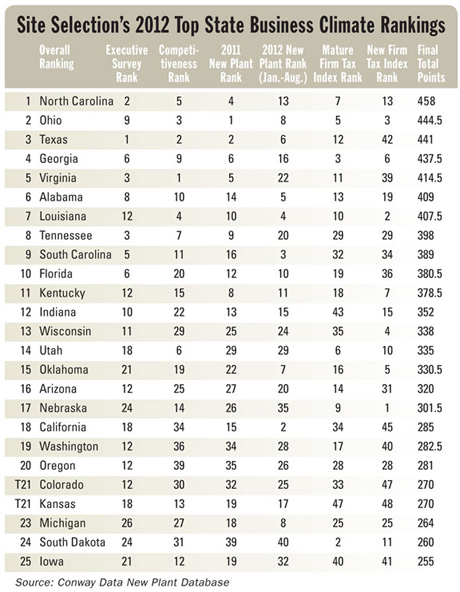 "I really believe this is about the quality of our work force," says Gov. Bev Perdue. "We have a work force that is second to none and a community college system in 59 communities that can train specifically to industry and retrain as often as the employers' technology demands it. That has been the constant in all of the industry hunts I have been on. Early on, businesses talk about the quality of the work force and the training they find at the community colleges."

Quality of life also enhances the business climate, says the governor, giving businesses a wide variety of amenities to enjoy and a wide range of locations in which to enjoy them. "We have a good brand and a robust incentive package —not as strong as in some other states, but when you package together the local communities and the state and our ability to train workers, it adds up."

Gov. Perdue and Commerce Secretary Keith Crisco developed an after-care program that assists companies once they are established in the state, not just during the recruitment process. "We get the reboots, the resets, from many companies as they continue to hire because they know that we will support them after the ribbon is cut," says Perdue. "We have spent a lot of time working with existing companies, making sure the environment is robust for them and that they have every opportunity to expand and grow here."

Winning projects in the first place is fun, too, says the governor.

"Frankly, there is nothing more fun as a governor than competing globally and winning a big-name project either to re-up and hire more people to build a bigger platform in the state or to recruit a company from somewhere else and have them establish a headquarters or other platform in North Carolina. It's cool, frankly, as a woman to help a woman- or minority-owned or small business start up. I didn't know I was good at economic development until I was governor. It's been one of the highlights of my tenure," she adds. Gov. Perdue did not seek re-election in 2012.

Gov. Perdue announced October 5th that Deere-Hitachi Construction Machinery Corp., one of the largest manufacturers and distributors of excavators in the Americas, will expand its operations in Kernersville. The company plans to create at least 340 jobs by the end of 2016, and invest more than $97 million in its Forsyth County facility. The project was made possible in part by state grants from the Job Development Investment Grant and the One North Carolina Fund.

"Companies like Deere-Hitachi recognize that North Carolina is a great place to thrive because of our top-notch business climate, incredibly well-trained work force and central location with access to customers and transportation channels," said Gov. Perdue. "When the company was ready to expand, North Carolina was the perfect choice."

Deere-Hitachi is a 50/50 joint venture between John Deere, based in Moline, Ill., and Hitachi Construction Machinery Corp. in Tokyo, Japan. The company was established in 1988 to provide both Hitachi and Deere brand excavators to the Americans. As part of Gov. Perdue's most recent visit to Japan, she met with executives at Hitachi to discuss its current presence in North Carolina and opportunities for it to grow.

At the Kernersville location, the company has integrated its design and support functions, as well as manufacturing, information systems and training and support programs, enabling Deere-Hitachi to provide more value to customers.

"This investment will have a significant positive impact on the State of North Carolina, providing additional employment opportunities for Deere-Hitachi as well as many of our North Carolina-based suppliers," noted Al Seeba, chairman and CEO of Deere-Hitachi. "Deere-Hitachi has been manufacturing in the state since 1988, and we are pleased to partner with state and local officials to help make our vision a reality."

The expanded Kernersville facility will enable the company to manufacture additional excavators for the mining and construction industries, as well as keep up with demand for the 47-metric-ton machine. In addition to the 743 Deere-Hitachi employees in Forsyth County, the company has operations in Canada and Brazil.

Also in October, Lenovo, the world's second-largest personal computer vendor, announced it will build a U.S. personal computer manufacturing line in Whitsett, near Greensboro. The announcement defies a trend that has seen electronics manufacturing jobs migrate overseas for more than two decades. As part of the expansion, Lenovo will create 115 new manufacturing jobs where workers will build both Think-branded notebook and desktop PCs for sale to domestic business, government and education customers, as well as consumers.

"Lenovo's decision to create electronic manufacturing jobs in North Carolina is a tremendous vote of confidence in the great skills and productivity of our state's workforce," said Gov. Perdue. "We have a strong track record of commitments to education, training and economic policies that promote growth in our state's manufacturing sector. This decision by Lenovo clearly demonstrates that North Carolina is an attractive place where leading global businesses can thrive."

The new U.S. PC manufacturing line currently is under construction and will open in early 2013. It will reside within Lenovo's recently expanded, 240,000-sq.-ft. (22,300-sq.-m.) U.S. distribution center in Whitsett. Hiring for the manufacturing and related positions will begin later this year. The U.S. manufacturing line will be capable of turning out some of Lenovo's newest and most innovative products, such as the recently announced ThinkCentre M92p Tiny Desktop and ThinkPad Tablet 2. Lenovo believes that having a manufacturing component in the U.S. can provide the capability to deliver products to customers more quickly and reliably in many situations, while offering an even broader and more valuable set of PC-related services.

"Lenovo is establishing a U.S. manufacturing base because we believe in the long-term strength of the American PC market and our own growth opportunities here," said Yuanqing Yang, chairman and CEO, Lenovo. "As Lenovo expands globally, we are establishing even deeper roots in each major market. In addition to localized sales and marketing teams, in our major countries we are establishing an even stronger manufacturing footprint, investing in R&D and ensuring that we hire top local talent. This global reach with local excellence helps us become even faster, more innovative and more responsive to our customers around the world." Lenovo's U.S. headquarters is located in Research Triangle Park. The company employs more than 2,000 people in North Carolina. 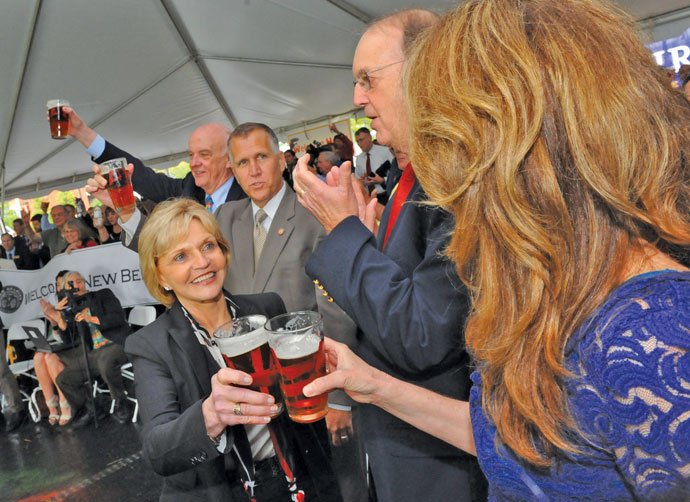 Gov. Bev Perdue toasts executives from Colorado-based New Belgium Brewing, the third largest craft brewer in the country and the maker of Fat Tire Amber Ale, at the April 2012 announcement of the company’s East Coast brewery in Asheville. The company plans to create as many as 154 jobs and invest about $175 million over seven years. New Belgium will be constructing a new, state-of-the-art brewery and tasting facility that will be a destination for visitors of the emerging brewery cluster in Buncombe County and the surrounding western North Carolina region. (For the story behind Asheville’s rise in the brewing world, see “Hops City” at siteselection.com.) 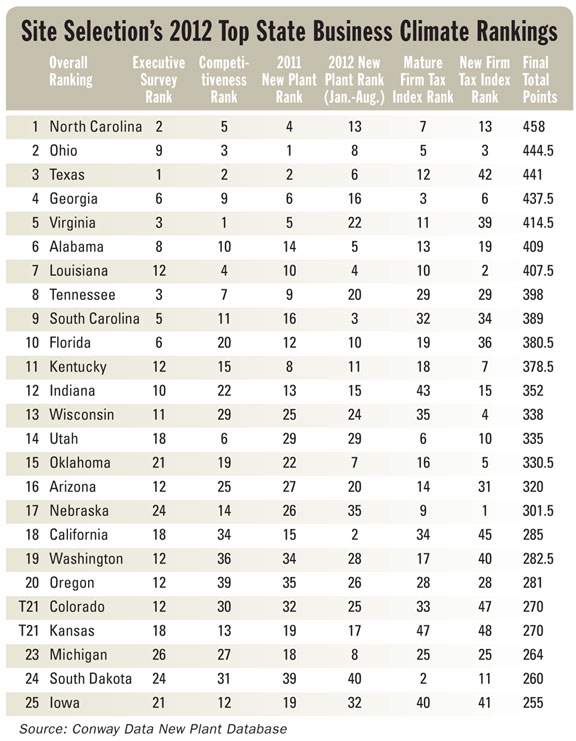