A high-tech cluster adds solar device innovation to its roster. 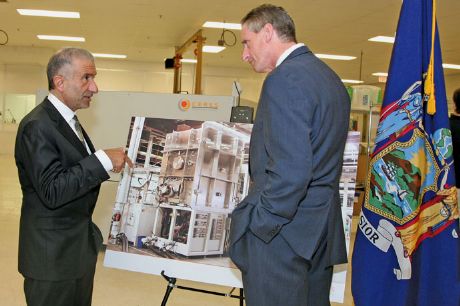 evelopment of new solar energy technologies figures to be a major driver in the economy of Upstate New York in the coming years. Collaboration between the U.S. Photovoltaic Consortium (PVMC) and Hudson Valley-based Ceres Technologies is the latest step in the industry's advancement. Participants project that the US$20-million deal will create more than 250 jobs in the region over the next five years.

The PVMC is a $400-million consortium for cooperative R&D among industry, university and government partners to accelerate the development, commercialization, and manufacturing of next-generation solar photovoltaic (PV) systems. The PVMC has access to the programs, talent and advanced manufacturing development facilities at SUNY Albany's College of Nanoscale Science & Engineering (CNSE) and SEMATECH and has become a proving ground for innovative solar technologies and manufacturing processes.

For Ceres, a provider of support equipment to the semiconductor and solar sectors, the partnership represents an opportunity to solidify its stature in the state's burgeoning solar sector. The relatively new company is located less than an hour from the CNSE campus.

Kevin Brady, president and CEO of Ceres Technologies, says his company's location just south of SUNY Albany has allowed it to develop an ongoing relationship with CNSE.

"We provide a variety of equipment on the semiconductor side as well as to SEMATECH," Brady says. "As they started to embark on the solar effort, we expressed an interest in being a part of that."

Ceres was a supplier to Veeco, an equipment manufacturer supplying the PVMC. Veeco's announcement of its exit from the solar business last summer was followed by CNSE's October 2011 takeover of Veeco's facility and PVMC's plan to use it for thin-film prototyping. Ceres bought Veeco's product line in February 2012 and subsequently began working with the consortium.

Ceres currently employs 80 people split between its 65,000-sq.-ft. (6,038-sq.-m.) manufacturing facility in Saugerties, N.Y., and its 10,000-sq.-ft. (929-sq.-m.) high-bay manufacturing site in Kingston, N.Y. Ceres was formed in October 2011 as a spin out of Precision Flow Technologies, a contract manufacturer for the semiconductor and solar industries.

Brady says 70 percent of Ceres' customers are in the semiconductor, solar and LED industries. He is bullish on the future of the New York's solar industry. 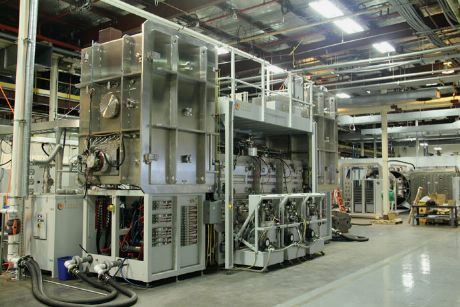 Ceres Technologies will be a key partner in establishing an advanced manufacturing development facility at SUNY Albany’s College of Nanoscale Science & Engineering (CNSE).

"New York State is very keen on developing and promoting a robust infrastructure that will support manufacturing of solar devices as well as semiconductor devices," Brady says. "From our perspective, plugging into the narrative is quite important to us. In general, New York State has been successful in getting that message out. We have seen a fair amount of response from industry folks, even from outside of the state. Internationally, even as far away as China, our customers seem to be aware of the technology development going on in this region."

Ceres will join PVMC as a core member and serve as a key partner in establishing an advanced manufacturing development facility at CNSE to enable rapid prototyping of innovative solar devices. PVMC is part of the national effort to reduce the cost of installed solar energy systems from $5 per watt to less than $1 per watt over the next 10 years.

Ceres has been awarded $764,000 in Excelsior Tax Credits by Empire State Development through the Mid-Hudson Regional Economic Development Council to assist the partnership. The partnership is projected to create 75 jobs for both Ceres and the CNSE, and an estimated 100 jobs at suppliers in the region.

"This significant expansion shows that the investments we have made in nanotechnology research in the Capital Region are generating economic growth and creating jobs across the state," said Gov. Andrew Cuomo at the Aug. 29 announcement. "This new public-private partnership shows how government is working with the private sector to invest in our state and grow our economy. We look forward to continuing to partner with the private sector to expand nanotechnology in every region of the state."

'The Opportunity is Huge'

Dr. Pradeep Haldar, CNSE's vice president for clean energy programs who serves as the COO and CTO of the PVMC, says Ceres is a natural fit for working with the consortium due to its proximity and its status as a major supplier to the industry. He says both the PVMC and Ceres are contributing to the collaboration's funding. Haldar says the PVMC is trying to set up a large-scale manufacturing line for thin-film PV modules and systems.

"The intention is to allow companies to use it as a test bed for research and development and new processes," Haldar says. "Ceres is providing about a half dozen tools on the front end of the line and another set of equipment on the back end." 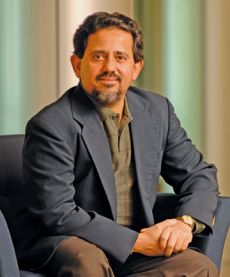 Haldar expects the CNSE to partner with other companies in the solar sector.

"We are slowly signing up more partners across the supply chain in the solar industry so that we can build a robust supply chain."

Haldar says that while the solar sector has been shaky and has been hurt significantly by the stagnant economy, there is reason for optimism.

"The market demand signs continue to grow exponentially, not just in the U.S., but worldwide. There have been some shakeups in the industry, but it's moving forward, and the strong companies will provide the leadership. The industry needs the kind of consortium that we have established here. That in itself will help the manufacturing and supply chain guys become stronger and move through the shaky economy."

Establishing an infrastructure is key for the industry's health and the New York State government has taken steps in that direction, Haldar says.

"Governor Cuomo is very supportive of solar technologies," Haldar says. "He has announced the New York Sun Initiative, a major initiative to move solar forward. What the state doesn't want to do is throw money at specific technologies like other states have done. New York has a very calculated and structured approach for investing in high-tech industries, including solar, and has been putting resources into everything starting from the first step to make sure there are enough opportunities for employment. New York is one of the leading candidates for deployment because of the high cost of electricity. The opportunity is huge."

Haldar says the consortium is striving to establish a standard of manufacturing excellence. The goal is to achieve cost targets through yield improvements and high-volume manufacturing approaches. He says the goal is reducing costs to $1 per watt, and he believes that is achievable in the next five to 10 years.

"There isn't one person or one company that can do this alone. The consortium is critical and Ceres is an important partner."

Middle Falls at Letchworth State Park in the Genesee Valley. The park is named for William P. Letchworth, one of the owners of a leading national manufacturer of saddlery hardware in the 19th century. 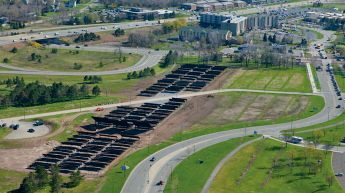 The University of Buffalo’s Solar Strand will generate enough electricity to power hundreds of student apartments and will reduce greenhouse emissions by 400 tons per year.  Photo by Douglas Levere ©2012 University at Buffalo
S

olar innovation in Upstate New York is not confined to Albany. Earth Day in April 2012 marked the official energizing of the UB Solar Strand, a 3,200-panel photovoltaic array at the main entrance of the University at Buffalo's North Campus.

The 750-kilowatt Solar Strand, designed by landscape architect Walter Hood, will generate enough power to help avoid the emission of nearly 400 tons of harmful greenhouse gases every year. It will also serve as a natural classroom for UB and K-12 students.

"The Solar Strand is a powerful demonstration of how creative partnerships between universities, the New York Power Authority and our elected leadership are helping to advance sustainable solutions for our region and state," said UB President Satish K. Tripathi. "As one of the largest ground-mounted photovoltaic arrays in New York State, the Solar Strand is a focal point for sustainable education and research. It's a resource not only for the university, but for the public, who will be able to learn, teach, work and discover in this new space."

"The completion of the Solar Strand underscores the success of our partnership with the University at Buffalo to support sustainability initiatives, as well as the Power Authority's dedication to the advancement of clean energy technology and the priority we place on teaming with local companies on such innovative initiatives to spur the Western New York economy," said NYPA President Gil C. Quiniones. "The Power Authority is dedicated to advancing Gov. Cuomo's aggressive and far-reaching NY-Sun Initiative through our funding of innovative solar technology research, training and demonstration projects and cost-reduction strategies to improve solar affordability for residents and businesses and bring to the fore this emerging technology."

Cuomo's program, announced the week before, aims to bring together and expand multiple solar power incentive programs in order to spur growth of the state's solar economy and quadruple annual development of solar power in New York State by 2013.

The Solar Strand also represents a cornerstone of NYPA's Renewable Energy Program to help create a pathway to commercialization of emerging renewable energy technologies by providing incentives to promote the demonstration and validation of new technologies. Under the renewable energy program, NYPA provided more than $7 million in project funding for the Solar Strand, as well as engineering and management oversight for the project's construction and installation.

Nearly 40 New York-based companies and hundreds of area residents contributed to the realization and construction of the project. The installation is part of a green building boom under way at UB. The university is in the midst of opening six new LEED-designed facilities in a two-year span. 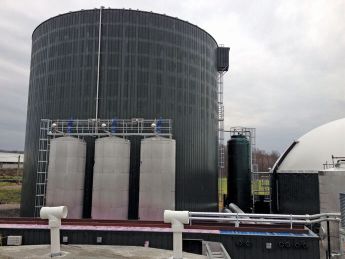 enewable energy sources beyond sunlight are ready to be harvested in New York's Upstate, thanks to two projects that recently got the green light.

The $134-million Taylor Biomass Energy project in fall 2011 got a red light, in the form of a judge's rescinding of permits. But final approval from the Montgomery town board came in May 2012 for the 21-MW biomass gasification plant, located next to the company's recycling facility. Taylor Recycling is known for, among other things, its hiring by New York City for the processing of more than 500,000 tons of debris from the destruction of the World Trade Center in 2001.

Crucial to the project's momentum are a $100-million loan guarantee from the U.S. Dept. of Energy and a 20-year feedstock contract with the City of Newburgh, N.Y. The plant is slated to reach full operational capacity by December 2013.

Also in May, just south of Rochester in Covington, the state's largest on-farm "co-digestion" biogas power project was launched. The facility (right) is located at Synergy Dairy, a 2,000-head dairy farm. CH4 Biogas LLC built, owns and operates the project under the name Synergy Biogas LLC. The plant is the state's first biogas project specifically designed for the co-digestion, or processing, of animal and food wastes. The biogas created in the 120,000-gallon co-digester is fueling a GE Jenbacher J420 biogas engine to generate 1.4 MW of electricity. By an aerobically digesting waste from local food processors in addition to the dairy's cow manure, the 425 ton per day, mixed-waste facility is more cost-effective, and prevents significant waste tonnage from going to landfills.

The Synergy project benefited from a federal investment tax credit, $1 million in incentives from the New York State Energy Research and Development Authority (NYSERDA) and a $750,000 grant from National Grid.