States ramp up efforts to recruit manufacturing projects from abroad. 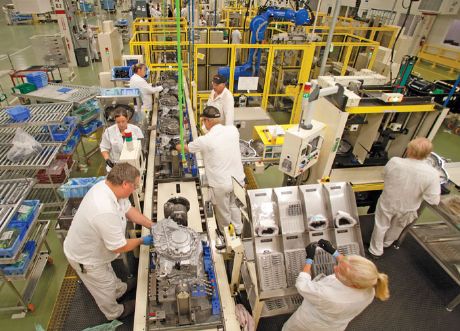 Honda workers manufacture the company’s new continuously variable transmissions (CVTs) at the company’s automatic transmission plant in Russells Point, Ohio.  The company added a new line employing more than 100, and is currently looking to site a third Ohio assembly plant somewhere in the central part of the state.
Photo courtesy of Honda
H

onda likes Ohio. Since November 2010, the company has announced investments totaling more than US$500 million in operations at its two auto plants and two powertrain plants in the state. Ron Lietzke, a spokesman for Honda in the U.S., says the investment is about strengthening the companies operations in Ohio and implementing new technologies.

"We're not done yet doing things in Ohio," Lietzke says, referring to the company's plans to build a third auto plant in the state by 2015. That plant will build the Acura NSX Supercar at a yet-to-be-determined site in central Ohio.

Overall, Ohio reported robust foreign investment in 2011 with 87 projects. If all goes according to plan, these announced investments will top $2.5 billion and create nearly 6,500 jobs when all projects are fully operational.

Georgia's 2011 FDI ledger was also lengthy, with 117 projects, or 29 percent of the state's total projects for the year. These announced expansions are projected to create more than 7,500 jobs with an investment of $1.4 billion. Korea and Germany were the leading countries of origin with Kia Motors Manufacturing Georgia's $100-million, 1,000-job project in West Point having the greatest economic impact.

Idaho reported one project, with Sorento Lactalis of France planning to expand its cheese plant in Nampa with a $50-million investment, creating 50 jobs.

Efforts in Kansas have included Gov. Sam Brownback's trade mission to the Farnborough Air Show in England and meetings with potential investors in Germany. The state logged a dozen FDI-supported projects in 2011, accounting for 435 jobs and $67.3 million in capital investment. State officials cite the $18-million poultry vaccine facility by Ceva Biomune in Lenexa as having the greatest impact. (See the Kansas Spotlight of this issue.) The company has since committed to a further $7-million expansion of its R&D complex in Lenexa, which broke ground in July.

Kentucky reports 65 FDI projects in 2011 with more than 3,000 jobs and nearly $806 million in investment. They include UFLEX LTD (Flex Films USA Inc.) in Elizabethtown. The project will occur in phases, initially creating 125 new jobs with a $90-million investment, ultimately doubling in scope for a total investment of at least $180 million and 250 jobs.

Louisiana's largest FDI projects were a pair of announced potential investments in new ethylene cracker and gas-to-liquids complexes in Calcasieu Parish in the southwestern corner of the state by South African firm Sasol, with total investments possibly totaling upwards of $14 billion.

This is the largest investment by a Chinese company in Maryland.

Chinese investment in the U.S. continues to climb, even as U.S. concerns about Chinese corporate and government espionage also mount. According to ongoing research from Rhodium Group, "Chinese firms now employ around 27,000 people in the United States, up from fewer than 10,000 just five years ago." Moreover, Chinese FDI in 2012 had already passed the $6 billion mark as of early October, said Rhodium, and was on its way to a new record high.

Minnesota logged eight FDI wins in 2011. The cumulative job and investment figures are not available, but they exceeded 72 jobs and $28 million in investment. Investments came from the U.K., Chile and Canada.

New Hampshire reported one FDI project during 2011, a $100-million investment by the Safran Group of France in an advanced manufacturing facility in Rochester.

North Carolina attracted 88 projects with a total investment of more than $1.1 billion and job projections nearing 6,400. The top project was from Ontario-based automotive supplier Linamar, which plans a precision machine components factory in Asheville. This is an $80-million investment that may eventually create 400 jobs.

In Oklahoma, 12 FDI projects were announced, representing 1,200 new jobs and more than $30 million in investment. Leading countries of origin were Canada, Australia, Belgium, Israel and Sweden.

Pennsylvania, citing figures from fDi Markets, reports that investment reached record levels with more than $5 billion in deals reported in 2011. The U.K. and Canada were the leading countries of origin.

South Carolina has historically been successful in luring FDI, and 2011 was no exception. The state procured 62 projects, which promise more than 9,200 jobs and involve more than $3.7 billion in investment. Japan, Germany, France, the U.K. and China were the top countries. Three of the largest tire manufacturers in the world — Continental, Michelin and Bridgestone — committed to invest a total of $2.7 billion and create 2,950 jobs in the state.

Tennessee is another state that topped the 100 foreign deals mark with 115 spread across 21 countries. More than 6,200 jobs are forecast with an investment of more than $1.8 billion. Among the notable projects was Mitsubishi Electric Power Products' decision to build a $200-million electric transformer factory in Memphis.

In Texas, recruiters at TexasOne, the state's public-private partnership for economic development marketing, have added a lot of stamps on their passports of late with trips to Canada, China, Italy, Germany and Brazil. The state estimates there were 170 FDI projects during 2011. The top recent deal, in terms of job promises, is from Atento, a division of Spain's Telefonica, which announced plans earlier this year to create 1,600 jobs as part of a customer contact center expansion in San Antonio.

West Virginia garnered eight foreign investments in 2011 worth more than $304 million, with plans to create 384 jobs. Japan had two of the projects, including the seventh expansion of Toyota's plant in Putnam County. That facility now employs 1,200.

Wisconsin reported 16 projects valued at $443.5 million with the promise of nearly 750 jobs. These included a planned expansion by Milwaukee Electric Tool, a subsidiary of Hong Kong-based Techtronic. The company is expanding its R&D center in Brookfield with an investment of $39.5 million.