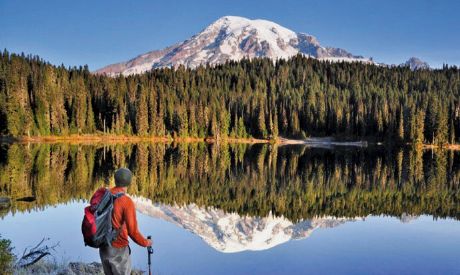 Established in 1899, Mount Rainier National Park was the fifth created in the U.S. Forty percent of visitors come from outside the state.

oney management firm Fisher Investments opened an office in Vancouver, Wash., in 2008 and has grown steadily since. Earlier this year, the company moved its Washington operations into a new two-building campus on a 168-acre (68-hectare) site in Camas, about 15 miles (24 km.) east.

David Eckerly, Fisher's group vice president, corporate communications, says there are too many unknowns to make a definitive statement. He says the company's expansion plans for Camas depend on many factors, some tied to confidential business plans.

"It depends heavily on how equity markets perform in coming years, which simply can't be forecast that far into the future with any certainty," Eckerly explains. "Our plans are flexible and vary depending on a wide range of possible outcomes."

Eckerly says Washington State offers a lot of benefits, including housing that is much more affordable than in the San Francisco Bay area, where most of the company's other employees are located. He describes schools in the area as being excellent. Those are powerful factors for Fisher's employees who are focused on raising families, he says.

"Taxation is important to our employees for the same reason," Eckerly adds. "Washington assesses no state income tax, compared to oppressive rates in California that could soon go even higher. Additionally, Washington is a much friendlier business environment and sees economic growth and job creation as good things, which we heartily agree with. We're glad to be there."

"At HCL, we share the innovation and product strategy vision of our partners, and the creation of a new center will help us further collaborate with them in building their global product development ecosystem," said Shami Khorana, president of HCL Americas. "This center shows our high level of commitment to our customers and our vision of local expansion by investment in people, facilities and processes," he added.

Apptio, a fast-growing Bellevue-based startup which is developing products to "manage the business of IT," hired nearly 115 employees during the first half of 2012 and plans to move into 61,000 sq. ft. (5,666 sq. m.) of space in three floors of an office building in Bellevue during the fourth quarter of this year. Formed five years ago, the company has drawn several accolades, including "Best Large Company to Work For in Washington State" by Seattle Business magazine.

Dell Services has opened a new technology center in Quincy that will provide customers in North America access to cloud technologies and IT outsourcing services. The opening is part of the firm's effort to develop new cloud-based services. The Dell Western Technology Center is a multi-client data center, with redundant network connectivity, uninterruptible-power-supply cooling and back-up emergency power generation. It is built with the largest installation of energy-efficient heat wheel technology in the U.S. for highly efficient cooling and low energy consumption, keeping costs and power usage to a minimum. 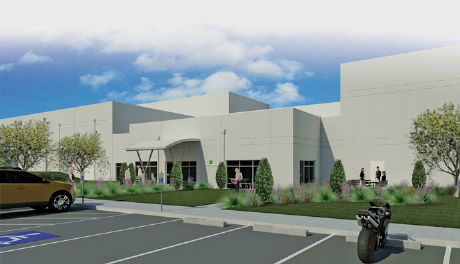 Amway is building a botanical concentrate manufacturing plant at the Port of Quincy.
Image courtesy of Amway

Outside of the IT realm, but also in Quincy, is the construction site for a new $38-million botanical concentrate manufacturing plant at the Port of Quincy. The direct-selling giant Amway broke ground for the 48,000-sq.-ft. (4,459-sq.-m.) facility in late August.

"Quincy is an attractive location to Amway for several reasons," says Jim Brundige, Amway's director of Nutritional Product Operations. "First, from a supply chain perspective, it's located close to our supply source for Nutrilite vitamins and supplements. Many of the botanical materials that will be processed in the Quincy plant, such as Echinacea, oregano and peppermint, will be harvested from our nearby Trout Lake Farm operations. Second, in Quincy we found a very progressive business climate. Throughout the site selection process, we were impressed with local business leaders, government officials and the economic development authorities for the Port of Quincy. It's been a positive experience, and people throughout the community have made us feel very welcome."

In a state with a diverse economy, one decidedly diverse region is the Tri-Cities area in the state's southeast. Carl Adrian, CEO and president of the Tri-City Development Council, says one of the region's bright spots in recent years has been a company that strives to create the right fit for its customers.

TiLite, a Pasco-based manufacturer of customized wheelchairs made of titanium, has been adding about 25 employees a year for the past several years and now has a work force of about 180.

TiLite's CEO David Lippes attributes the company robust growth to expansion of designs for its wheelchairs and its rapid international expansion, which has now reached 37 countries. He describes his company's products as prosthetic wheelchairs.

"Our type of products are known around the world and are proving to give people independence that at one time they did not have," Lippes says. "We have been expanding the number of our products to reach a larger group of people."

TiLite manufactures its wheelchairs in a 73,000-sq.-ft. (6,781-sq.-m.) building, which Lippes says has capacity for a 50-percent increase in business. Adjacent land is available for facility expansion. Lippes founded the company in 1998. He says it arose out of a company he purchased that made mostly sports equipment out of titanium. He chose to turn the technology in the direction of wheelchairs after analyzing various industries and realizing that by using titanium, he could reduce the weight of the chairs by about 50 percent.

"What happens to people who use traditional wheelchairs is that the chairs are heavy and become difficult to push," Lippes says. "If the chair doesn't fit well, they will have a hard time making efficient pushing strokes. What happens is their shoulders and wrists and elbows get torn up, so they have surgery and end up in a power wheelchair. By creating a chair that fits someone ergonomically, they can push, and reduce the incidence of joint deterioration over time." 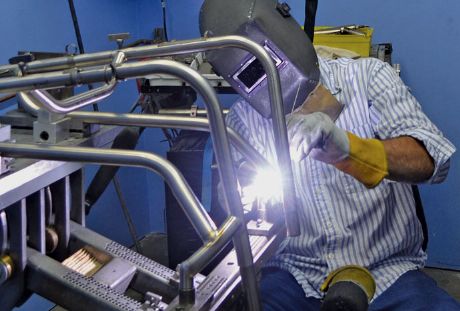