Some tech companies are eschewing Silicon Valley
for the quality of life a few miles north. 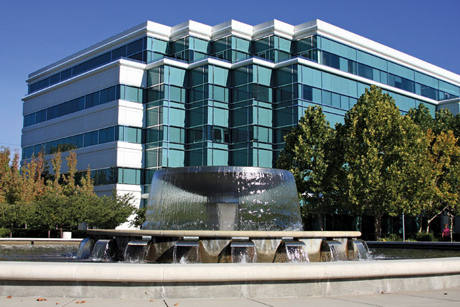 GE is ramping up its Global Software Center at the Bishop Ranch business park in San Ramon.
Photos courtesy of GE
N

ewly hired software engineers are already busy crafting code for the "Industrial Internet" in GE's new Global Software Center in San Ramon, Calif. When GE announced its plans for the center late last year, it planned to hire 400 software professionals. The project is going so well that the iconic company is considering doubling that number in the coming years.

GE is ramping up in a little more than half of a 233,647-sq.-ft. (21,705-sq.-m.) building in the huge 585-acre (237-hectare) Bishop Ranch business park, which is home to more than 500 companies, including Chevron's international headquarters and regional offices for Toyota, Procter & Gamble and IBM. GE looked at build, purchase and lease options as it combed the east San Francisco Bay area, and had good possibilities with all three before going the lease route when it signed a 10-year deal last September. 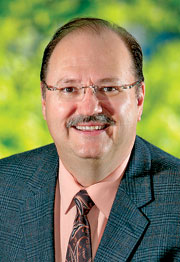 Bill Ruh, GE's vice president and global technology director who is heading the new operation, says talent was the key driver in GE's decision to put the software headquarters in the Bay area. Ruh, who has more than 25 years experience in the software industry, came to GE in early 2011 from Cisco Systems.

"If you are going to be in software, this is where you need to be," Ruh says. "We did the analysis and looked all across the Bay area, and certainly had a lot of discussion about why to put it in the East Bay area first. If we're going to attract talent, being here offers a lot of great opportunities to hire people. The bottom line was that a significant amount of engineering talent lives within a 30-mile drive of San Ramon."

Ruh says GE's goal is attracting people early in their careers (five to 15 years of experience) who want to make a mark, but also balance their careers with quality-of-life factors, such as a short commute.

"We are focused on the next generation of software with the Industrial Internet," Ruh says. "This will lead to better products for healthcare, energy and transportation, and we are able to attract people who can explain these things to their families."

Various published reports have stated GE's investment in the San Ramon project at US$1 billion. Ruh says the company prefers to phrase it as $1.5 billion spent globally in all software operations over a three-year period. He says the results have been tremendous at the one-year mark.

GE's initial approach was to buy land and build, but a look at Bishop Ranch changed the company's thinking.

"When we started to look at the quality of life in this park, we saw that it is more of a community, and it wasn't just like having a building in an office park," Ruh says. "Bishop Ranch has a sense of community. We love the fact that they focus on being green and that they have buses to BART [Bay Area Rapid Transit]. And it may seem silly, but our employees love that food trucks come here. All of this helped us see that this place is pretty special. They had a building available that is just right for us, and got us in quickly. We signed a long-term lease that is beneficial for both us." 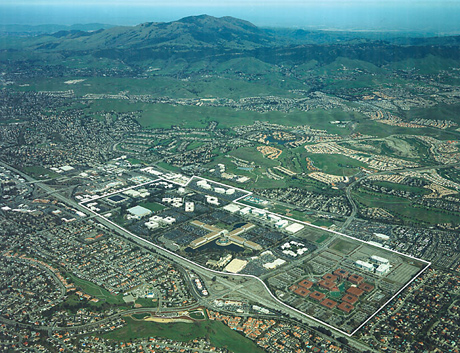 Ruh says the new quarters don't look like a GE building. He says GE didn't feel the need to be different, but the space is very open and informal with lots of meeting spaces and video connectivity to other company locations. A liberal use of glass and open environments helps give the building a creative feel, he says.

A year ago, GE had hired two people for the center, including Ruh. As of Aug. 14, GE had hired 200. Ruh anticipates that number reaching 280 by the end of the year, and the initial goal of 400 will be reached by the end of 2013. GE has been able to pull employees from several of the big tech companies in the region including Cisco, Microsoft, Symantec and TIBCO Software.

"These are new hires, not transfers," Ruh says. "It's playing out exactly as we thought. We took about half of the building. The other half we have a right to. We are so excited about the fact that we have done so well, we feel we will probably continue to grow beyond the 400 commitment and we may end up doubling that number. One thing I am deeply surprised about is how many people we have been able to hire who live in the city or in the peninsula. That's been the biggest surprise."

Ruh says GE is in the midst of working on its strategic plan for the next three years, which will be approved by the end of the year. He says things are going so well that he is confident there will be further expansion. Ruh is pleased with the quality of applicants thus far and says his HR team has been able to be choosy, pulling just 1 percent of the "ton" of resumes the company has received.

Locating north of the increasingly congested Silicon Valley area — where the company would be recruiting against Google, Facebook and other tech companies — has helped recruiting, he says. The chance to work on the next generation of the Internet also has considerable appeal.

"At every open house we have, we are getting a few hundred people to show up," Ruh says. "I am always amazed. It comes down to the idea that we are at a place to balance quality of life with the ability to work on great things. It's playing out nicely."

This excerpt from a GE ad on Linked-In for a software quality engineer offers insight into the company's recruiting effort at San Ramon:

"At GE's new Software Center of Excellence in San Ramon, CA, some of the brightest minds in technology are developing the software, analytics, and user experiences that will transform industries and improve lives by connecting people and businesses to the nearly 50 billion machines and devices that build, move, power, and cure our world. GE calls this vision the 'Industrial Internet,' and GE developers are leveraging technology advances such as cloud computing, intelligent devices, and big data and analytics to deliver ground-breaking new ways of tackling some of the world's biggest challenges."

Ruh says the technology being developed in San Ramon will be about boosting creativity and helping customers achieve more from their assets. Much of it will focus on the healthcare, energy and transportation sectors. 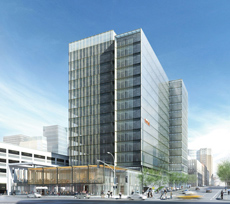 "For us, the ability for them to get greater efficiency out of those products is incredibly important," Ruh says. "It's not so much to make the physics of devices better, but the idea of the Industrial Internet is that you can make these devices more intelligent and connect on the Internet and provide employees greater information about their performance. Maybe they can get an early indication of a part breaking. This is really the future for any industrial area. All of the consumer industries have essentially already been disrupted in the same way. We see the same disruption happening in our industries, and we intend to be a leader."

Across the bay in San Francisco, tech companies are expanding their space at a robust pace. Among them is Riverbed Technology, a fast-growing decade-old specialist in WAN [wide area network] optimization, which is moving its headquarters to the trendy SoMa District, known for its cultural amenities and the waterfront landmark of AT&T Park, home to Major League Baseball's San Francisco Giants. 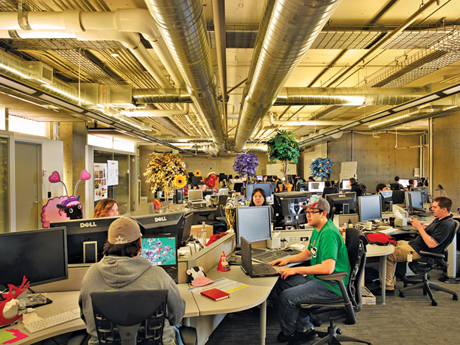 "Downtown San Francisco, especially this part of the city, is a vibrant, happening place to be for workers," says Mike Guerchon, Riverbed's senior vice president of employee services. "If you are a young person a few years out of college and want to build a career and grow, it's an exciting place with lots of employers, restaurants and public transportation. The Giants are just down the street. It's more vibrant than Silicon Valley." 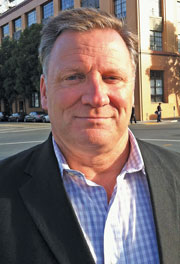 "From a real estate perspective, the location was intriguing to us, as we were looking for a place in a Class A building close to Caltrain and BART and south of Market," says Steve Hirai, Riverbed's senior director of corporate services. "Our lease at our current building expires in July 2014, and we were looking for a about a couple hundred thousand square feet to go into when our current lease expires. It's a perfect fit. We got a Silicon Valley-like building in San Francisco."

San Francisco property developer TMG Partners is refurbishing the 12-story building in an $87-million project Hirai describes as "knocking off the skin, adding two floors and re-skinning it with glass." Hirai says Riverbed considered "for a minute or so" purchasing a building in San Francisco, but ruled it out as too costly.

"There is a reason the company has $550 million in the bank," Hirai says.

Riverbed is adding employees at a steady clip, averaging more than 200 new hires a year, Guerchon says. The company currently employs 1,700, with 1,000 in the Bay area.

While the solar manufacturing sector has had its difficulties in California and elsewhere, new investment continues on the research side. Hanwha Solar, a Korea-based global provider of photovoltaic products, opened an R&D lab in Santa Clara in April. Researchers at the facility will explore a variety of next-generation PV concepts for efficient, low-cost conversion of solar energy into electricity. 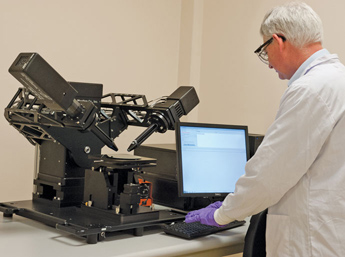 "Hanwha Solar located this facility in Silicon Valley to tap into the region's culture of innovation and technical expertise," said Hee Cheul Kim, president of Hanwha Solar. "It is critical for a global company like Hanwha Solar to have a strong presence in California, because it is the epicenter of clean technology R&D. The investment being made in solar is a reflection of the confidence the Hanwha Group has in clean energy as a long-term growth engine."

Hanwha Solar invested $14 million in the 30,000-sq.-ft. (2,787-sq.-m.) facility, which was built with room for expansion in mind. The company will employ 30 at the R&D center, in addition to the 47 people it employs across the U.S. Hanwha Solar has invested $50 million in the U.S. over the previous two years, broadening its local presence and gaining access to advanced solar technology through strategic partnerships with businesses like OneRoof Energy, Crystal Solar, Solar Monkey and 1366 Technologies.

California and its cities have some of the toughest recycling laws in the nation, so it's no surprise the state is home to some of the largest recycling facilities, two of which have opened this year. 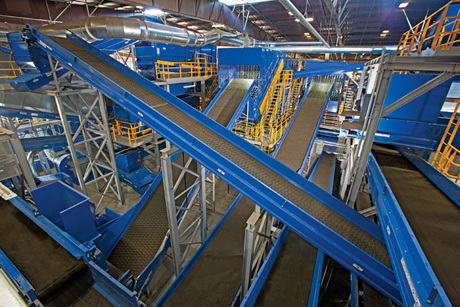 Republic Services opened what it bills as the world's largest recycling operation on Aug. 9 in Milpitas. The facility can process up to 110 tons per hour of multiple waste streams. It will process all of the commercial waste generated by businesses in San Jose. The system was installed at the company's Newby Island Resource Recovery Park.

Bottle-grade raw material producer carbonLite opened a 220,000-sq.-ft. (20,438-sq.-m.) plastics recycling plant in Riverside. The facility will process more than 2 billion plastic PET bottles annually from the state's recycling programs. Previously, most plastic bottles collected in California were exported to China and converted into polyester fiber, according to carbonLite officials. The company plans a second phase in 2013 that will double its capacity.