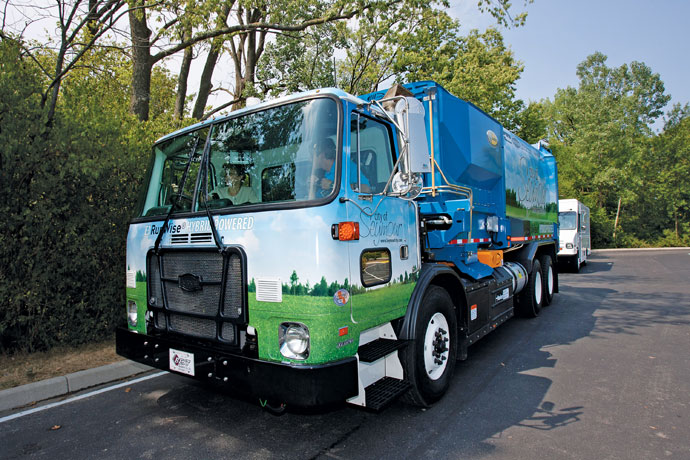 hen DuPont needed to make a plant location decision between Luxembourg and Circleville, Ohio, in the Columbus Region, the site selection ultimately came down to one factor — who wanted it more.

"We were able to work with state and local officials to get some job retention tax credits that made a huge difference," says Steve Bonine, manager of global grants and incentives for DuPont. "In fact, that was the tipping point."

As a result, the plant in Circleville just south of Columbus employs 546 workers today and continues a 58-year tradition of advanced manufacturing in Central Ohio. DuPont makes the Mylar film that is used in solar photovoltaic cells at the Circleville plant, one of 13 facilities the global chemical giant operates in the Buckeye State.

"Everything else between Luxembourg and Circleville was equal," Bonine says. "Incentives made the decision for the company. It brought the project to Ohio."

DuPont is not the only advanced manufacturer making the decision to choose the Columbus area. Throughout the region, high-tech firms are betting big on the work force, transportation infrastructure, logistics network, job incentives and other attributes that make this part of Ohio a globally competitive manufacturing center.

"Besides the incentives, the Columbus Region had to have all of the other factors that DuPont seeks in a competitive manufacturing location, including attractive construction costs, wage rates and other things," adds Bonine. "We have been very pleased with the quality of the work force here. They are hard working and well educated. We also need a work force that is flexible, and we have found that in Columbus."

The historic productivity of the work force at the Circleville plant was a key factor in the site selection, notes Bonine.

"Ohio has been very good to us," he says. "With our experience at DuPont plants in Dayton, Akron, Toledo, Plain City, Fort Hill and other locations in Ohio, we tend to look at our existing sites before going greenfield. Things like job retention incentives are very important to us. It is a big thing for us to have healthy plant sites. The first place we look, when siting a new project, is at home."

The new operation in Circleville came on line in 2011 and reached full production in the spring of 2012. "We are a high-technology company now with smarter people but not as many jobs as before," adds Bonine. "That is the future of industrial manufacturing operations at DuPont and in this country."

For Columbus, the future is now. As global competition demands that manufacturers become more efficient, workers in Central Ohio have responded. From 2001 to 2003, manufacturers in the region experienced a 43 percent increase in productivity.

"The most important part of any business is the people," says Shane Terblanche, general manager of Hybrid Drive Systems for Parker Hannifin in Columbus. "One of the most important site selection criteria for us is whether or not we can find the required talent in a particular area. The state of Ohio and the city of Columbus provide us with a talent pool for technicians, engineers and management folks."

On July 18, Parker Hannifin celebrated the grand opening of its new Hybrid Drive Systems plant on Gateway Boulevard in Columbus. The 83,000-sq.-ft. facility will employ 125 workers upon full capacity.

The site selection process took eight months to a year to complete, notes Terblanche. "Three different states were considered. We looked at things like talent, resources, cost of living, proximity to our corporate headquarters in Cleveland, and proximity to suppliers," he says. "The I-75 automotive manufacturing corridor is literally on our doorstep here in Columbus."

The two finalist locations — Columbus and Ann Arbor, Mich. — squared off much like their famous Big Ten counterparts Ohio State and Michigan do every autumn on the football field.

Terblanche downplayed the college town rivalry, noting instead that "we really took a look at the state of Ohio versus the state of Michigan. The incentives in Ohio were superior. The area around Columbus made a lot of sense. Parker has over 30 locations in Ohio, and we had three other divisions already in the Columbus area."

Terblanche says Parker liked Columbus for many reasons. "Columbus is a large city, the fifteenth largest in the U.S.," he says. "We don't have traffic problems. The standard of living is high, but the cost of living is low. For example, I drive twice the distance that I used to drive in Chicago but I do it in half the time."

He adds that "the overall environment, facilities and resources that are available in Columbus are very good, and it is a great place to raise a family."

The deal-closer, however, was the talent. "About 50 percent of the employees we have in Columbus now are engineers, and that will eventually change as we add more assembly technicians on the shop floor," Terblanche says. "It will take about a year or two to get to full production. We are looking right now at the proximity of our suppliers. Some of them may move closer to us or perhaps even move right into our building. That will create even more jobs in our area."

He notes that "we have been successful in hiring top-level talent for our manufacturing operations in Columbus. We have seen quality results far higher here than at other places. Because of this, we are starting to see repeat orders. Customers that have had vehicles outfitted with our system for 18 months to two years are contacting us to replace other vehicles. The City of Miami has already ordered vehicles from us twice."

Terblanche also credits the leadership in Columbus. "This has been a great city to do business with," he says. "The Columbus 2020 folks and JobsOhio folks have been great to work with. They have introduced us to suppliers. We have also done some work with the Ohio State University and the Center for Automotive Research. We have great partnerships here."

Ron Lietzke, spokesman for Honda of America Manufacturing, says that the Japanese-owned automotive manufacturer has been equally proud of its own Ohio work force, including the 10,000-plus concentrated in the Columbus Region. 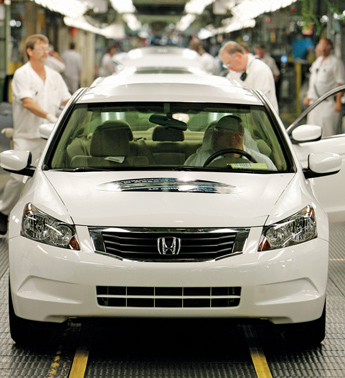 Honda of America is the largest manufacturer in the Columbus Region, employing some 10,200 workers engaged in automotive and engine assembly and automotive R&D.
Photo courtesy of Honda

In the past 18 months, Honda has announced more than $500 million in new production capabilities and upgrades to plants in East Liberty, Marysville, Anna and Russells Point, Ohio.

These new capital investments represent a continuation of the legacy of automotive manufacturing that began when Honda opened its first North American plant in Marysville in Central Ohio on Nov. 1, 1982.

"The infrastructure here has always been very good," says Lietzke. "The roads, highways and railways form a great transportation network in this region. This has become the hub of Honda's North American manufacturing operations. North American purchasing and logistics for Honda are based here, and our major automotive engineering center is now here in Ohio as well. We now do the engineering of the global models for the Odyssey, Accord, Civic, CRV and Fit here."

Lietzke says the long-term plan is for Honda to transition more global engineering work to its Central Ohio hub. "We will continue to grow to take on new leadership roles for the region and the world," he adds. "The key to all of this is our work force. We have implemented the team concept. People collaborate here and work together as teams. We have a highly educated work force with a strong work ethic in the Columbus Region."

This Investment Profile was prepared under the auspices of Columbus 2020. For more information on the Columbus Region, please contact Kenny McDonald at km@columbusregion.com or 614-225-6063. On the web, go to www.columbusregion.com.

IAMC INSIDER: Meet the IAMC active member from KLA-Tencor Corp., learn what some attendees took away from the recent IAMC Professional Forum in Colorado Springs, and read about new projects from member firms (Aug 5, 2010)